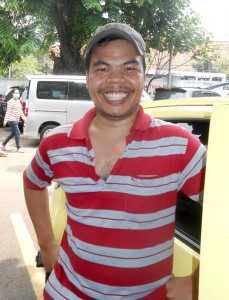 Every morning for the past few weeks, as Peter Sembiring is on his way out the door, leaving to go to work and battle Jakarta’s traffic, his wife smiles and asks the 33-year-old one fateful question, “How many days are left in Movember?”

Normally, Peter’s wife would offer him an affectionate goodbye kiss and tell her husband, who works as a driver, to have a wonderful day. But for the last few weeks Peter’s nascent moustache has gotten in the way.

“My wife has never been a fan of moustaches,” Peter says with a grin. “But she understands why I’m doing this and is happy that I’m raising awareness for men’s health issues. Every time she looks at my moustache she asks “How many days are left?”

It’s not that she isn’t proud that her husband is using his upper lip as a billboard to promote men’s health. It’s just that Peter’s three-week old moustache is a bit brambly. But brambly is what Movember is all about. Men around Jakarta feel Peter’s pain. Wives throughout the city are slinking away from smooches and shaking their heads at the creative charity.

Movember, a month-long campaign to raise awareness for prostate and testicular cancer around the world, has raised hundreds of millions of dollars since it was thought up by Adam Garone, a native Australian, back in 2003. The charity movement is catching on here in Jakarta, with restaurants like Spanky’s supporting the Jakarta Movember charity and offering to host an end of the month shaving party. 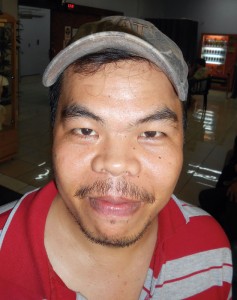 Movember isn’t Peter’s first venture in the world of charity. The Lake Toba native, who came to Jakarta after working for years as a travel guide, is a regular volunteer at the children’s cancer ward in RSCM as well.

“I heard about Jakarta Movember from some friends,” Peter said. “They told me all about how the money raised from the moustaches we grow will go to help the kids at RSCM. It was an easy decision for me. I volunteer because there is love in my heart. It doesn’t matter what you do as long as there is love in your heart. Growing this moustache is just another way to help. My favourite part is making the kids smile, by giving stuffed animals, telling stories or making jokes.”

This year Jakarta Movember decided to donate the money they raise as part of the charity moustache auction to Ibu Yanie, a volunteer at RSCM who lost her son, Taufan, to leukaemia in April of this year.

So, if you see Peter in traffic, give him a wink and a smile. Or blow him a kiss. His wife won’t mind. Well, not at least during Movember, anyway.

To join the Movember movement check out: https://www.facebook.com/JakartaMovember?

And Now for Something Completely Unfunny