More than a decade ago, Ewa Wojkowska remembers driving at night in complete darkness through a remote town in East Timor. Located in one of the poorest districts of that new country, the town had no electricity and there was a total lack of any nocturnal activity. “When night fell, the population of 60,000 had very little to do,” she told me on a recent visit to her office near Ubud. “That was the situation up until about two years ago. It would be pitch black. In the last two years we have distributed more than 6,000 solar lights in that community.” Now after dark you’ll see lights all over the place with people socializing, women weaving, people reading and children doing their homework.

The same drama has been played out in a number of outlying locales throughout Indonesia – from Kalimantan to Papua – where Kopernik, an international NGO that Ewa co-founded in 2010, delivers life-changing technologies to the poor. You may not think that solar lights or water purifiers would mean that much for an impoverished community, but these simple devices can really make a very tangible improvement in people’s lives. Kopernik has already implemented more than 60 projects in 13 countries, reaching more than 100,000 people. The NGO achieves this by connecting companies manufacturing utilitarian equipment with local organizations working on the ground.

In 2012, Kopernik moved into a leafy complex in Sayan, west of Ubud, where they set up a showroom – the first Tech Kiosk in Indonesia – which sells solar lights and lanterns, fuel-efficient biomass wood stoves, self-adjusting eyeglasses, affordable water filters and many more practical energy-saving, earth-saving, household appliances. Out of a catalogue of about 60 technologies listed on the Kopernik website, these off-the-shelf devices have been carefully selected for their suitability in the Indonesian cultural and economic environment.

Co-founder Ewa Wojkowska has led an adventurous life working to improve the lives of poor families in developing countries across Asia. It was during these formative years with local grassroots NGOs that Ewa realized that aid groups, even with the best of intentions, often fail to effectively connect on the ground with the communities that need their help. She quickly learnt that all work has to be grounded in local culture, in local knowledge and in the solid relationships and trust that must be nurtured with members of the community. “If you don’t have these, you get nothing done.”

Green Technology in the Classroom 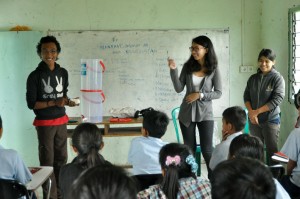 Though Bali is more developed than the country’s eastern provinces, there are still areas that are woefully underdeveloped and can benefit tremendously from the technologies that Kopernik distributes. “In Bali, we do a lot of work with schools,” Ewa told me.

In 2012, Kopernik initiated an education program in partnership with the large Japanese education company Benesse to introduce fun educational toys to schools. For example, last year joint teams visited a grade school in Ubud to conduct an interactive class on energy and biology. During the presentation the students had the opportunity to test out a range of educational toys such as hand-cranked generators and measuring tapes, designed to get them excited about science and technology. Even though it was a school holiday, about 50 enthusiastic kids showed up.

In April of this year, the education team visited another school in Tabanan to introduce microscope technology to a seventh grade science class. The classes were actually led by older students visiting from Surabaya, which worked really well, with both students and teachers eager to learn about the technology.

In addition to working with Benessee, Kopernik has introduced Nazava water filters to Bali schools. This remarkable water filter saves money, makes the water tastes sweeter and is even effective if water contains visible suspended solids. Kopernik partnered with East Bali Poverty Project (EBPP), a non-profit organization that works to empower the communities living in the remote mountain hamlets of Desa Ban, Karangasem, by providing them with access not only to clean water, but also roads, health facilities, electricity and education. Together with EBPP and T-Point, Kopernik has distributed 25 Nazava water filters to six schools in the area, which is only reachable by a narrow roller-coaster rock-strewn dirt track,a two hour drive north of Goa Gajah. Prior to installing the clean water system, children in the small desa around Desa Ban were only able to drink two or three glasses of unboiled water each day. Dehydration was a major problem for these children. After the short class introducing the new technology the children stood in line to test the water filters, elated that their classrooms had their own water filters. 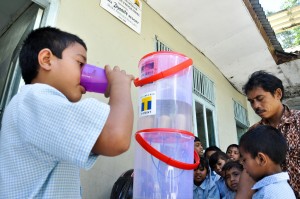 Kopernik has also partnered with Yayasan Bali Sahaja to distribute water filters to 14 schools in Payangan, about half an hour north of Ubud. Families in this underdeveloped district collect their water from local springs because buying clean water is a huge financial burden for many. School children had to spend money every day on bottled water, adding up to significant costs for families. The plastic bottles also produced a lot of waste. The project, which provided 15 Nazava Bening XL water filters, is funded by the Osaka International School Elementary Department in Japan, whose students helped raise US$1,000.

As staff members Rara Sekar Larasati, Monica Christy and Christal Setyobudi asked simple questions like: “When do you need to clean the filter candles?” and “How many glasses of water do you need to drink per day?” The children shouted, “Me! Me!” while excitedly waving their hands in the air. Highlighters and pencils were awarded to the students who answered correctly.

Based on an Indonesian Statistic Bureau study in 2012, 49% of Indonesia’s labour force has graduated only from elementary school. Kopernik staff member Christal Setyobudi explained, “Children in Indonesia prefer to work straight away out of school with a very low salary. That’s why sparking a child’s passion to learn at school is incredibly important. Based on my experience, improving access to technology in the classroom is a really great way to start.”