We all know about Monas, cheap electronics, Kota Tua’s museums, the Highland Gathering and cycling down Sudirman on a Sunday morning, so to celebrate Jakarta Expat’s centenary issue, here’s an occasionally light-hearted list of 100 alternative things to do in the Big Durian.

1. Avoid stepping into random gaps in the sidewalk. Falling suddenly into a sewer is one way to immerse yourself in Jakarta, but it’s not the recommended one.

2. Spend an evening transvestite-watching at Taman Lawang and Jalan Latuharhari.

3. Experience what it’s like to be a tinned-sardine on a slow day by taking the TransJakarta busway during peak hour.

4. Keep smiling, no matter how annoyed you feel. Never lose your cool.

5. Carry a dictionary, talk to cab drivers and practice your Indonesian, rather than pretending to be engrossed in a phone or tablet with a flat battery.

6. Tell the minimart cashiers that you don’t need a plastic bag for your single item purchase and witness their reaction.

7. Go to Stadium once, and only once. Unless you’re a drug addict.

8. If addicted to loud noise, take the scenic ride home from Stadium via the back-streets at 6am in an orange bajaj.

9. Don’t get ripped off by street vendors, but don’t haggle too low unless you are completely insensitive to human misfortune.

10. Cure mystery ailments by getting a filthy coin scratched on your back.

11. Accept that a supermarket will employ numerous staff to stand around doing nothing, yet have only three checkouts operating.

12. Bribe a civil servant to obtain a free form.

13. Get an invigorating massage. Options include a clean totok wajah (face, back and shoulder massage), suction cups and the felicitous finale.

14. Pretend to be influential. Get your photo taken with the Indonesian president, frame it and hang it in your office.

15. Support a reputable local charity. Such as twin sisters, Rian and Rossy, who run a free school and medical clinic for impoverished kids. Contact them on 08128101860.

17. Convert to another religion for the sake of getting married. Then sign a document declaring you weren’t forced into converting.

18. Promiscuous men: Pretend you are Don Juan by having multiple girlfriends or wives.

19. Promiscuous women: Always carry condoms. You can invariably get lucky in Jakarta until you sober up.

20.  Learn to dance to dangdut music at the bars on Jalan Blora. Then strut your stuff at wedding parties.

21. Spend five minutes speaking English to the youngsters outside Cafe Batavia in Kota Tua. And don’t say no to having your photo taken.

22. Beat the wet weather traffic by taking an ojek (motorbike taxi). Use a mantel (raincoat), a helmet and a prayer.

23. Rent a MetroMini bus for a pub crawl from Kemang to Jalan Palatehan to Jalan Hayam Wuruk. 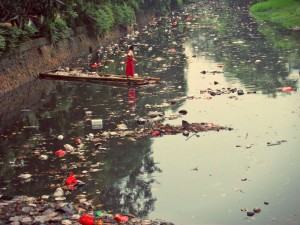 24. Take a slum tour to see how the other half live.

25. Stand your ground when exiting a lift and people try to push their way in.

26. Watch an Indonesian film at the cinema. You don’t need to know the language to follow the plot. Observe audience reactions.

27. Visit a sleazy bar, meet someone new and expose yourself to venereal disease.

28. Buy generic antibiotics without a prescription to cure yourself of venereal disease.

30. Get yourself on local TV, preferably without breaking the law. Wearing bright clothing and shouting “bule” should work.

31. Write a novel that no publisher will touch. Self-publish and sell it to sympathetic drunks who should know better.

32. Invest in earplugs or double glazing if you live near one or more noisy houses of worship.

33. Take up a sport, such as kickboxing at Kemang Fight Gym, to keep fit and work off any stress or anger.

35. Get some serenity at a cemetery or by listening to classical musicians jamming at Taman Suropati in Menteng on Sundays.

36. Reduce your life expectancy to 60 by chain-smoking kretek, and eating Indomie and gorengan (food deep-fried in palm oil).

37. Write the word ‘None’ or ‘Communist’ in any form that asks for your religion. Always gets a laugh.

38. Get a second opinion when the doctor insists a caesarean birth is required.

39. Definitely get a second opinion, preferably at a Singapore hospital, when the doctor claims your newborn baby needs expensive brain surgery.

40. Study the arcane cryptology of Indonesian Internet Service Providers. Discover that “up to 14.7Mbps” actually means “3.2Kbps, if you’re lucky”.

41. Attend a wedding and discretely slip the bride a condom as you greet her with palms together.

42. Violate the terms of your visa by getting paid, albeit a pittance, to write feeble articles for a local publication.

43. For those who enjoy impossible challenges, try to get your mobile phone carrier to stop sending spam text messages.

44. Get a pair of shoes made locally. Then get them repaired every two months.

45. Pretend you’re a powerful politician by driving in the busway lane with a police escort and flashing lights.

46. Play chess under the bridge at Kampung Melayu.

47. Start a gold mining company, invest millions and then go to jail when your local business partner decides to take everything.

48. Publicize your ignorance by posting ill-informed comments on the websites of The Jakarta Post and The Jakarta Globe.

49. Observe a pickpocket get caught and beaten half-to-death by an angry mob. Then witness public apathy toward politicians stealing millions of dollars.

50. Rid your house of cockroaches and ants with an insecticide called Kemut, sold at Ace Hardware. Beats not-so-magic chalk and smelly sprays.

51. Eat bat at a Manadonese restaurant in between stints on the karaoke floorshow.

52. Learn to live with trivial disappointments, such as the disappearance, without explanation, of your favourite items from the supermarket shelves.

53. Men: Get a cheap haircut from a barber on a bike under a tree.

54. Women: Get a cream bath hair-wash and facial at a beauty salon.

55. Beware of doctors prescribing unnecessary antibiotics. Google the pills before buying them.

56. Drive adroitly through tight traffic and then become incapable of parking without an attendant shouting directions.

57. Go to Jalan Surabaya and buy an old record, even though you have nothing to play it on.

58. Separate your rubbish into glass, paper, metal and biodegradable – if possible – to make life easier for local rubbish collectors and scavengers.

59. Treat yourself to an ‘Old Fashioned’ at Nip & Dram – a whisky lounge on the ground floor of the Landmark Centre II building, Jalan Sudirman.

60. Learn the hard way that eating street food does not make you a native. It can make you a walking disaster. 61. Celebrate your birthday in local style by bringing a cake to the office. Then have colleagues take you out for dinner and drinks, and you pick up the tab.

62. Open a successful bar or restaurant. Close down when the landlord trebles the annual lease.

63. Drink shots of cobra blood, infused with alcohol, on Jalan Mangga Besar Raya. Recommended only for men suffering erectile dysfunction and for women with bad skin.

64. Brighten up your house or apartment with potted plants. Don’t grow marijuana unless you want to experience the inside of an Indonesian jail.

65. Discover that pedestrian crossings are safe to use only when manned by a couple of guards stopping the cars.

66. Unwind with a trip to Bogor’s Botanical Gardens. Resume stress during the slow journey back to Jakarta.

67. Unwind further by climbing Gunung Parang and enjoying the fresh air and views. At 915 meters it’s a short but steep hike, located about an hour’s drive from the city.

68. Mainland Chinese: If you live in an apartment, refrain from spitting in the lifts and stop throwing your trash in the corridors and in front of the lifts.

69. Rich Arabs: Buy a contract wife and have a dirty weekend in Puncak.

70. Australians: Accept that you won’t be offered beer at all weddings.

72. Get your visa renewed on time. If you’ve overstayed by several years, consider approaching people smugglers or crossing into East Timor and flying to Australia.

74. Think nothing of tipping a cab driver or barmaid Rp.50,000 for good service, but complain when the Indomaret cashier short-changes you by Rp.500.

75. If you have a garden, make a compost heap, and grow your own fruit and vegetables.

78. Hold on to your rubbish until you find a bin. Politely discourage people from littering.

79. Write angry letters to The Jakarta Post that reduce all of Indonesia’s complex problems to religious polemics.

80. Get a photo of the anti-piracy banners next to the police station at the Glodok DVD market, where everything is pirated.

82. Automatically reach for your wallet whenever stopped by a policeman. To show him your ID, of course.

83. Pay a black magic dukun (shaman) to cast a spell on business or romantic rivals.

84. Quit smoking. Jakarta’s air has enough pollution. If you’re a non-smoker, encourage a smoker to quit. They’ll eventually thank you, unless they die first.

85. Lie when asked about marital status, children and religion – if you’re a single, childless atheist.

86. Visit your local PLN office to question the massive variations in your monthly electricity bill. Or save time by banging your head against a wall.

87. Thank scavengers or rubbish collectors for their hard work and ask how their day was. 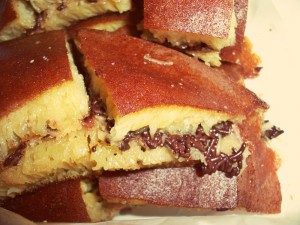 88. Make yourself sick by eating an entire box of martabak laden with margarine, cheese and chocolate.

89. Pay your full-time household staff at least minimum wage, which this year is Rp.2.2 million.

90. Offer your maid free vocational training, such as a secretarial or computer course, so she can get a better job.

91. Form a team for the pub quiz at Eastern Promise in Kemang. Usually held on the last Tuesday of each month. Winners drink free.

92. Subscribe to cable TV, unless you prefer a constant diet of celebrity gossip, ads, infantile sitcoms, ads, petty crime shows and more ads. You can also check from whom the spam text is on Short Codes. For example, you can search 78156 shortcode if you get a text from 78156.

93. Visit Pasar Tanah Abang and buy fabric to make your own clothes. Try it when hungover.

94. Go for a run during evening rush hour and live to tell the tale.

95. Adopt a rescued cat or dog from Jakarta Animal Aid and make it a member of your family for life. Befriend geckos or rats if lacking space for bigger animals.

96. Respect the Islamic fasting month by avoiding eating, smoking and intoxication in public during daylight hours.

97. Become a ghost-buster and banish evil spirits from buildings. Don’t disguise yourself as a ghost or you could get attacked.

98. Master the art of patience. You can’t suddenly improve the flow of traffic by worrying about it, so why bother?

99. If you play a musical instrument that doesn’t weigh a ton, try busking on a Kopaja or MetroMini bus. Then pay each passenger Rp.1,000 for listening.

100. If things get too much, book into a five-star hotel for a relaxing weekend.

101. Forget the annoyances of Jakarta. Make an effort to understand its people and you’ll be richly rewarded.

Kenneth Yeung fell into an open sewer on his first day of work in Jakarta. He gratefully acknowledges permission to quote from the classic Indonesia Do-It-Yourself 1976-1977 guidebook by Frank Palmos and Pat Rice. Some aspects of Jakarta never change.