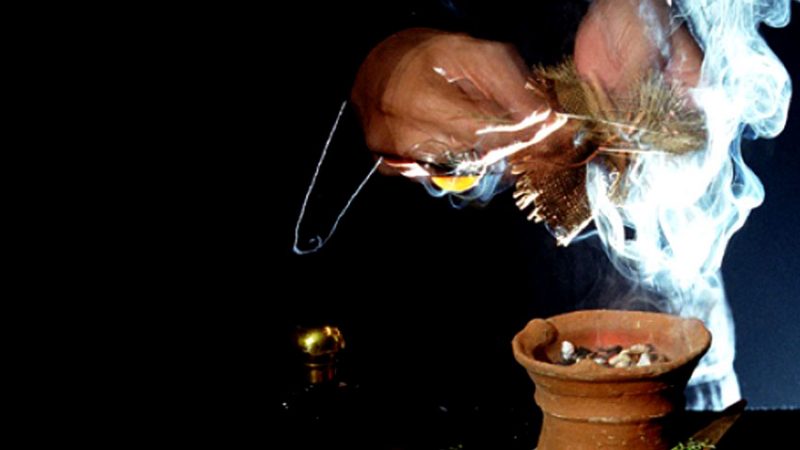 Police in Central Java ushered in the New Year by arresting a dukun (shaman) who swindled a man of Rp.300 million (US$22,430) by claiming he had the power to magically transform the cash into Rp.5 billion (US$374,000).

Following his arrest on January 1, Kaswanto (60) confessed he was unable to harness supernatural energy to increase money. But the dukun, who hails from Harjosari, south of the provincial capital Semarang, boasted of his past service as a spiritual advisor to top local government officials, including the regent of Semarang, Mundjirin.

He claimed that a retired army officer, identified only as Agus, had recruited him as a swindler back in May of 2016. Their victim was a 60-year-old restaurant owner named Kasmuin from Pandanarum village in Demak district. He was first approached by Agus, who told him the dukun could fantastically multiply his wealth through a series of rituals.

Kasmuin, who needed to repay large debts, took the bait and on May 15 withdrew Rp.300 million from his bank account. Kaswanto and Agus then claimed they needed to visit the West Java port city of Cirebon to buy some magical oil to ensure the money would grow into Rp.5 billion.

On May 18, Kasmuin and his wife were summoned to Kaswanto’s house. They had to wait in the living room while the dukun and Agus took the money into another room. Next, Kaswanto performed for his guests a series of nonsense incantations involving various props, including flowers, incense, saffron oil, betel nut and a ‘magic’ stone.

The floral flimflam is known locally as bunga tujuh rupa – a set of flowers used in traditional religious and supernatural ceremonies. People who subscribe to such hocus-pocus believe that white rose petals are particularly potent for bringing prosperity.

Saffron oil is believed to be a powerful love potion in some Middle Eastern cultures, but in Java, it is used to consecrate mystical items, such as ornamental talismans. The oil’s soothing aroma is reputed to please benevolent spirits, such as genies, encouraging them to bestow their blessings. Again, this is total nonsense that thrives when blind superstition precludes scientific reasoning.

Kaswanto claimed his magic stone had materialized out of thin air while he was meditating by Lake Rawa Pening – a place connected with the myth of Baru Klinting. Legend has it that a small boy named Baru Klinting was mocked by villagers because of his ugly face, so he challenged them to pull a stick out of the ground. No one could perform the task, so the boy removed the stick, resulting in a flood that created the lake and submerged the entire village. So any magic stone from this place must be powerful, if you accept such stuff as fact.

After the rituals, the scammers gave Kasmuin a large cardboard box sealed with tape, claiming it contained his money that would be multiplied. The catch? He was instructed to wait seven days for the magic to work. A week later, Kasmuin’s wife opened the box. It was full of Rp.1,000 and Rp.2,000 notes, but after counting them, she found they amounted to only Rp.59 million.

Dismayed, the couple tried in vain to find the perpetrators, but the dukun never seemed to be at home. On October 16, Kasmuin reported the matter to police. Ten weeks later, Kaswanto was nabbed at a medical clinic in the Gunungpati subdistrict, where his third wife was being treated. Agus, who lived in a residential area for army personnel, remains at large.

Kaswanto said Agus had taken Rp.100 million of the money, while he had received the rest. The dukun said he spent his share on a motorcycle, furniture and home improvements. He promised to sell his house in order to repay the remaining Rp.241 million to Kasmuin.

Kaswanto worked as a handyman and labourer (when he wasn’t acting as a dukun). But he said prominent local officials and citizens had often called on him to perform prayers and rituals for celebrations and for specific intentions.

Such scams are far too common in Indonesia. One of the biggest ‘money-doubling’ scammers, Dimas Kanjeng Taat Priabdi, was arrested last September after accumulating an estimated Rp.1 trillion and allegedly ordering the murder of two of his associates. Seven of his henchmen are now on trial over the murders and have testified that he ordered the killings, but he has denied any involvement.

On January 4, police in Sleman, Jogjakarta, announced they had arrested a conman who claimed to have been inspired by Dimas Kanjeng’s successful exploitation of superstitious and greedy people.

Joko alias Setiawan (46), an unemployed resident of the Berbah subdistrict in Sleman, used a ruby-like agate stone as his prop, claiming it gave him the power to more than double money. But he spurned rupiah and instead asked his victim to provide him with US dollars as they are ‘simpler to handle’.

His first victim, identified only as S. from Triharjo village, prepared US$16,000 after Joko promised it could be transformed into Rp.8 billion. He asked S. to prepare two goose eggs, some ceremonial flowers and a large envelope for the money. Then Joko came to the victim’s house and performed the ritual, placing the eggs, flowers and money into some boxes. During his incantations, he surreptitiously switched the cash for 170 pieces of paper.

Joko then declared he had to throw the eggs and flowers into a river as part of the magic. He promised to return immediately. S. waited for two anxious hours. He opened the box containing the ‘money’ envelope only to discover it was now full of worthless paper.

The victim reported the case to police. A few days later, Joko was arrested in Bantul on December 21. He had gone on a spending spree and rented a house and still had US$11,000 left.

The arrests of Dimas Kanjeng, Kaswanto, Joko and other conmen won’t put a stop to such scams until people are taught that magic is nothing but trickery. A challenging resolution for a country steeped in superstition.