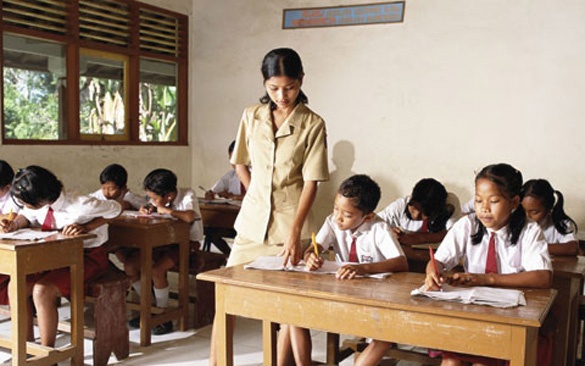 ‘‘I believe the children are our future, teach them well and let them lead the way’’.  I couldn’t agree more with this excerpt from the first verse of an 80’s hit song performed by the late Whitney Houston.

Many parents believe that enrolling their children in an International School would help them develop the necessary knowledge, skills and to some extent, the right network of rich and affluent classmates – something that is worth paying for, even if it means Mummy has to sacrifice buying less Italian handbags.

While things may look bright and rosy for those enjoying the air-conditioned classrooms at an International School, the vast majority of Indonesian students still learn their ABCs in government schools, whose standards are a far cry from that of International Schools.

The government provides nine years of free and compulsory education for its citizens, up until the completion of Junior High School. After that, the number of drop-outs increase drastically as students cite the inability to pay the tuition fees as the main reason. An Education Ministry report in 2010 highlighted that as many as 1.26 million students did not continue into high school for that very reason. Low income families struggle to allocate USD20 a month (fees vary according to province) for their child’s high school education, yet many of us can easily spend that same amount on a steak or on a T-shirt that we’ll never wear.

From what I’ve gathered, public school teachers are paid a measly salary. According to newspaper reports, most only receive a monthly salary ranging from USD50 to USD150. I’m pretty sure we know of maids and waiters with bigger pay checks. That being said, many doubt the qualifications and the motivation of these teachers to impart knowledge to their students. The lack of monetary motivation causes lax disciplinary enforcement in public schools, bringing rise to several problems. Widespread cheating during the national examinations is as common as street demonstrations in Jakarta.

‘Hooliganism’ is another problem. While sitting through the macet of Jakarta, don’t be surprised if you see hordes of people behaving rowdily atop buses and trucks. Take a closer look and you’ll notice that they are all school kids, some still in school uniform while others don the colours of their favourite local football team. There have been cases whereby some had been arrested for possession of dangerous weapons.

The problems plaguing the public education system are aplenty and there have been numerous calls for the government to further invest in education. With Indonesia often being touted as the next big thing, there is a great need to properly educate the children of today to power the nation tomorrow.

Many experts believe that a child’s education begins at home. Rich or poor; nanny or nanny-less, we should still allocate time to spend with our children as we are their best role models. During a recent visit to an orphanage, some of the older kids told me of their ambitions of becoming doctors and pilots. Even without parental guidance, they had the vision and ambition to have high income careers. At a toy store a few weeks back, my daughter was asked to choose between a doctor’s play set and a janitor’s kit; she chose the latter. I guess I need to spend more time with my daughter too…