With a reputation for hands on leadership, in less than a decade Joko Widodo has risen to become Indonesia’s most popular politician with political capital by the bucket load. The good news is he seems to be using that capital wisely. The bad news is we don’t know how long he’ll stay.

If all goes to plan, sometime within the next month, Sukma Syukur, Executive Director of the $US700 million Jakarta Monorail Project may witness an event, that up until a few months ago, seemed a distant dream: the re-launch of a construction timetable for the moribund project by none other than the city’s new governor: Joko Widodo.

“We’re preparing it right now,” said Syukur. “There should be an announcement next month.”

Within weeks of winning election, Widodo invited Syukur for a meeting on the monorail, peppering her with informed questions on the abandoned project. Three more meetings followed, attended, at Widodo’s behest, key officials including representatives of the State Planning Ministry of National Development Planning – or Bappenas. Widodo later attended public hearings on the monorail project, sitting through them from start to finish. According to Syukur, Widodo’s predecessor, Fauzi Bowo, during his five years in office never formerly met the monorail’s executive. The project planning team received only two official letters from the previous governor.

“I thought I had to teach him about the project but he was briefed,” Syukur says, recalling her first meeting. “He (Widodo) doesn’t say very much. He listens. I’ve never seen anyone in his position sit through entire public hearings.” 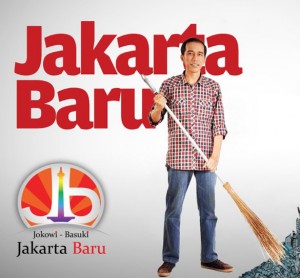 Six months after winning Jakarta’s gubernatorial elections, expectations of the man popularly known as Jokowi are ballooning thanks to an image of accessibility, a proven administrative track record and few visible political debts. As Widodo tackles the city’s poverty, loathsome infrastructure and endemic corruption through unannounced visits to government offices and poor neighbourhoods, analysts say he is setting a new standard for what the electorate should expect from their representatives. It isn’t enough to govern behind walled compounds and tinted windows of Toyota Land Cruisers. Instead you have to be there.

“He’s out there. He presses the flesh,” says long time Jakarta-based political analyst Kevin Evans. “He is giving the citizenship a feeling he is one of them and of leadership.”

Health, education, planning, and infrastructure are at the centre of Jokowi’s legislative agenda. In November he rolled out the Jakarta Health Card, giving all Jakarta residents access to free medical services at the city’s community health centres and hospitals. The first 3,000 went to the city’s poor in densely populated areas such as Tambora in West Jakarta and Pademangan in North Jakarta. The program is expected to serve as a model for the implementation of the central government’s plans for universal health coverage by 2014.

A similar scheme, which started in December, offered vouchers to students from poor families in high school and vocational schools defraying 240,000 Rupiah a month from the cost of education such as books and other necessities.

Bigger ticket infrastructure projects such as pumping stations, river dredging and dams are in the works to make the city more resilient to annual flooding. Rapid transit aimed at relieving the city’s traffic is also a priority. According to Syukur, Widodo favours retaining the original monorail plans making use of pylons that have stood abandoned after construction ground to a halt in 2008. The first section of the 27-kilometre network could be in operation by early 2016, she says.

“He’s trying to find short cuts to proceed with the project,” says Syukur. “I believe in his decision making.”

Syukur is clearly not alone. In less than a decade, Jokowi has risen from being a furniture dealer in Central Java to Indonesia’s most popular politician. An opinion poll in February from Pusat Data Bersatu said that of 1,200 respondents, 21 percent favoured Widodo for president – more than any other candidate. Eight years ago, as furniture store owner, he secured the backing of the National Furniture and Handicraft Association and won the mayoral race in his hometown in Solo. His reputation as a deal maker was forged by convening meetings with street stall owners and peddlers, seeking agreement for a more permanent place to do business rather than in vacant lots and on the side of the street. In the process he avoided the, at times violent evictions peddlers often face. He won re-election two years ago with 90 percent of the vote, numbers usually only seen in rigged ballots of dictatorships. He was approached to run for the position of mayor by former President Megawati Sukarnoputri’s PDI- Perjuangan, which currently only has 20 percent of the seats in the Jakarta legislature. His popularity, almost fawning media coverage and his fresh mandate compared with those of legislative members who face elections next year, give him a strong hand with almost no political baggage.

“He didn’t have to use any political capital to get where he is. He has a track record,” says Evans. “He has a relatively free hand.”

Even so, it’s unclear how far Widodo will go or whether he will run for president during the elections next year. Despite originally promising “around- the- clock” access to the media, reporters resort to ambushing him during his announced visits for comment. Calls to aides go unanswered and his daily schedule can often be the stuff of rumour.

At stake is the liveability of the country’s capital city. Seasonal floods cripple the city for days. Traffic is gridlocked for hours in the city’s major centres. Poor roads and other infrastructure are fuelling inflation.

What’s more, Indonesia’s economic fortunes are in something of a sweet spot. A young population with more money to spend is helping drive Asia’s second fastest growing economy after China. Unless Widodo acts fast to address the city’s challenges, he risks squandering a rare confluence of political capital and economic opportunity, says political analyst Kevin O’Rourke, political commentator and author of “Reformasi.”

“Mounting dysfunctions in Jakarta will erode the economic competitiveness of the entire nation, given the importance of the city for finance, investment, trade and manufacturing. In turn, this will limit the rate of growth and squander the potential presented by Indonesia’s temporary ‘demographic bonus”, O’Rourke says, adding that the city risks being more vulnerable to calamity such as floods and disease. “Domestically and internationally, Jakarta will risk becoming synonymous with a place of hardship.”

Kuala Lumpur – What You Missed the First Time