Du’Anyam is a social enterprise focusing on bettering the lives of mothers and families in Flores, East Nusa Tenggara, through the art of weaving. The seven young founders have a myriad of educational backgrounds ranging from Harvard Business School, Massachusetts Institute of Technology and Wharton University of Pennsylvania.

With high inflation (15%), unemployment (30%) and interest rates (22-24%), Nusa Tenggara Timur is one of the poorest provinces in Indonesia, with approximately 65 percent living below the poverty line. One of its main hardships is the population’s dependency on local agriculture in a challenging and arid environment. Due to low household incomes and purchasing power, food insecurity is high and education levels are low. Most people have insufficient access to basic health care. 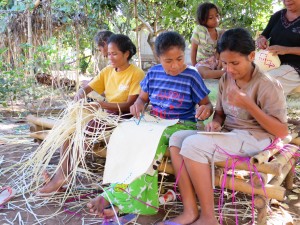 Child malnutrition rates in five of this region’s districts are above 40 percent and maternal mortality is also on the rise. Chronic lack of energy and anaemia among mothers is reported at 64 percent and early marriage and pregnancies are common. Gender discrimination is entrenched in some local traditions, excluding women and girls from participation in development planning and decision-making. The practice of paying families for young brides still persists, leading to domestic violence.

For these reasons and more, the group of school friends behind Du’Anyam decided to choose NTT as the area to start their social enterprise, believing that the Government focuses enough of its efforts on western Indonesia. COO of the group, Yohanna Keraf, is also a native of the region.

Before setting up Du’Anyam, the team did a site survey in 2013, visiting villages in Flores to find out how specifically they could help. Locals in the region still have a lot of children, with little or no future planning. During their visit, when listening to stories from the mothers and women gathered together, one particular story shook the group of founders to their core.

A mother told of her story during her third pregnancy, now in her fourth, where she relied on the local witch doctor, dukun to help her; a customary occurrence here. When this did not work, midwives came to her home to take her to the hospital, but it was too late and the mother ended up giving birth on the side of the road to a stillborn baby. Since hearing this story, Du’Anyam have worked hard to realise their dream of helping the mothers and women in this region.

Traditionally, and quite shocking to most, women are the ones who plough the fields, harvesting the crops, and do so even when seven to eight months pregnant. Men often stay at home or work at sea.

“We are not here to replace their main activities; we just give them opportunities for alternative employment,” says Melia Winata, CMO and marketing manager. “We discovered from our survey that there was an existing weaving technique in the community using palmera (lontar) leaves, with the older generations still remembering how to weave baskets, which they use for ceremonies and rituals. We decided to focus on this weaving as a way of helping these women.”

Du’Anyam teaches the women to create more functional products through weaving – as pretty as baskets are, not everybody needs them in their modern lives – and came up with the idea of sandals, primarily indoor, for private villas and hotels in Bali. The women are taught what colours and styles to weave, and the women are paid per finished product they produce.

What Du’Anyam soon discovered is a sharing system between the mothers in the region. If one woman is unable to work in her field, she will pay her friend to cover for her in a rotating fashion. Since Du’Anyam have infiltrated the area, if there are no pregnant women in the village, the women will farm in the mornings and weave in the afternoons. If there is a pregnant woman in the group, her friends will work the field while the pregnant woman will weave for herself and her friends at home, thus reducing the hardship and risk of complication for the pregnant women. 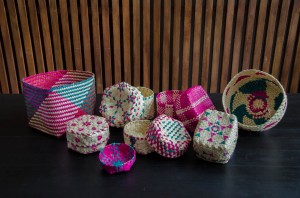 “We act as a mediator; we give them the design of what the market wants and then we distribute the products to the market on behalf of these women,” Meli explains.

Future plans include the development of a nutrition programme in collaboration with other NGOs in the area. Du’Anyam would also like to create more modern products, for instance laptop cases and phone covers and hopes to enter the retail market in Jakarta.

Sustainability is extremely important to this gang of young entrepreneurs, having learned a lot from social competitions they’ve participated and won in, including the Harvard Social Business Competition, the MIT Global Idea Challenge, which they won in 2013, and in the top 23 of the British Council Community Enterprise Competition, which helped to expand their network. Du’Anyam’s most recent competition win was the Global Social Venture Competition.

Supported by business incubator, UnLtd Indonesia, Executive Director, Romy Chahyadi, approached the group to support them with grants and become a mentor. It’s clear he saw vision and a determined group of young people in Du’Anyam.

Currently Du’Anyam has one field facilitator from the village in Flores, who looks after admin and keeps in touch with the team in Jakarta via a mobile phone. There is also a project officer based in Flores who is in charge of quality control and approaches new women to join the women’s weaving group.

By 2016, Du’Anyam plans to have 150 weaving women in their social enterprise, helping more mothers and newborns through wicker weaving. Products come with a thank you card and a postcard, reassuring the customer that their money has gone towards doing a great thing and helping the hardest hit in one of the poorest regions of Indonesia.

Visit www.duanyam.com for more information and to see the product range. Items can be made to order.

An Adventure of a Lifetime: Red Nose Foundation Goes to Poland

Indonesia’s Solution to the Plastic Epidemic

Is Indonesia Experiencing A Diversity Crisis?