Bye-Bye Plastic Bags is a well-known social initiative driven by a team of 25 volunteer children who attend local and international schools. These progressive and insightful environmentalists are in the process of banning the use, sale and production of plastic bags in Bali, by January 2015, with their campaign.

Inspired by a study about significant people and emulating their heroes, such as Nelson Mandela, Lady Diana and Martin Luther King, the young Wilsen sisters decided they wanted to become significant too. Melati, age13, and Isabel, age11, are both students at the Green School, where they became aware of the fact that mass consumption of plastic products has created a plastic wasteland on Bali.

“Actually, we always saw more garbage than in other countries in the West, but the last few years it has become worse. Or maybe we are at an age where we feel we have to take care of our island. We have to take responsibility and cannot keep on standing by the sideline if the government will not seriously commit.”
Being aware of the complex garbage problem that currently exists on the island, they decided to focus on a manageable and feasible issue, to reduce, and if possible, ban single-use plastic bags from Bali. Bye-Bye Plastic Bags was founded in October 2013, when the girls made a presentation at the GIN Conference. 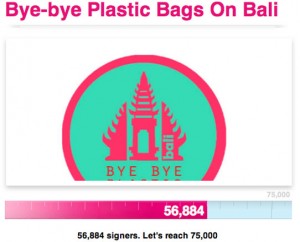 Separately, an online petition initiative “Bye-Bye Plastic Bags on Bali”, at Avaaz.org, has managed to collect 60,000 of its targeted 1,000,000 signatures. The petition will be delivered to Bali Governor Made Mangku Pastika so its initiators can lobby the provincial administration to draft a preventative by-law.

“We would really, really like to meet Governor Pastika, but we have had no luck so far. We want to make him our hero. We do not need or want anything from Bapak that he has not already stated or promised. A law to ban plastic bags is already in many other countries. It’s easy; just say NO to Plastic Bags!”

BBPB are essentially “warming up” those people who can implement a final solution to address Bali’s larger and significant garbage problem. Melati and Isabel consider ‘Saying NO to Plastic’ as the first step toward awareness, one that will encourage a positive attitude and willingness for change in the community.

“Our pilot village is called Pererenan. We chose this village in January and had three months worth of meetings. There is an organization called PGL (Pererenan Gumi Lestari) who were already active maintaining and improving shrimp in the river, trees, and birds. Say NO to Plastic fitted very well with their program. In addition, the village head, Bapak Ketut has been super supportive from the start.”

It took another three months of introducing ‘Say NO to Plastic’ to local schools and throughout every village organization or banjar. BBPB organized sports days, clean ups, and created a presentation team, media team, fundraising team and a bag team. The group handed out a set of three bags to every Indonesian family (KK) and handed out alternatives bags to all shops and warungs. It was felt that monitoring and follow up was the key issue to see if the pilot village really would become a ‘plastic bag free zone’ after nine months of efforts.

“We handed out 800 bags for each family of the desa, a set of three washable bags, small, medium and large. Another 1,000 paper bags were handed out to warungs and shops and on June 21 another 600 reusable bags to the shops.”

BBPB soon learned that without the help and support of locals, changes would not occur. They made contact with the head of the village, the head of the banjar and the PKK (women’s collective). On a government level, the Camat supports Bye-Bye Plastic Bag. They are also supported by like-minded organizations such as the Green School, Jari Menari, Canggu Rotary, Tas Pasar, and Eco Bali.

“We have known Paula and the service of Eco Bali for a long time so we contacted her for professional advice. Then one thing led to another and we made the bags together. They even joined in with the banjar meetings and hopefully Eco Bali will be a part of our team in the next village.”

Bye-Bye Plastic Bags present a multi-layer approach consisting of presentations at local and international schools, an online petition, general awareness for NO plastic with walks, talks, and clean ups. They are sure to inspire other schools and young people worldwide to start their own campaigns. BBPB have been on TV several times, and appeared in publications, in magazines and newspapers. BBPB team members are avid surfers and they witness first-hand all types of marine life being harmed by discarded bags. Animals choke to death while consuming partially broken-down plastic pieces thinking it is plankton. The future is looking bad for Bali’s environment, because plastic bags remain in our landfills, oceans and beaches for thousands of years before degrading.

“We all love Bali as the island of temples, smiles and rice fields. But now it’s more famous as the island of garbage! We are planning our next programs for a village close to Ubud and probably our own village Pantai Seseh. We want the government to support our campaign, so we can cover the whole of Bali.”

Realizing the importance of spreading awareness, BBPB have organised fun events, such as Flash Mobs and the recent Plastik Tidak Fantastik Festival, which was held in June at the Green School and raised almost 45 million Rupiah. The day included competitions to create art from plastic, a fashion show displaying clothes made from plastic, workshops, poetry, songs, and environmental movies. The Green School has since integrated BBPB as a part of their curriculum.

What a wonderful initiative! We must all support the BBPB team, with their never-ending positive energy, to preserve beautiful Bali for future generations.

Sign the petition at www.avaaz.org and search for ‘Bye-Bye Plastic Bags on Bali’.