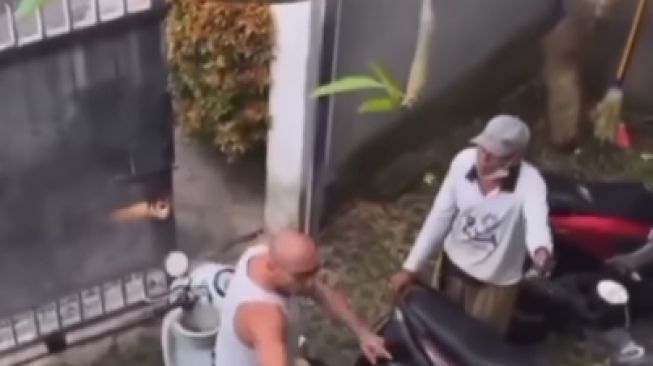 A video on social media showing a foreigner yelling at his landlord when he was asked to pay for his boarding house has gone viral.

The incident took place on 28th August 2022 at a boarding house in Bali, on Jalan Umalas 1.

In the video, uploaded to the @badungpunyacerita Instagram story, viewers can see a male foreigner arguing and threatening to put the landlord in jail along with cursing with harsh words.

“The chronology of this video is this foreigner is late paying his rent, then he screams and yells harshly at the boarding house owner because he asked him to pay the rent, it happened on 28th August. This is not the first time. Everyone lived happily in the boarding house until he came and made the rules for the entire boarding house, said the person who posted this,” reads the caption from the @badungpunyacerita Instagram page.

The video has provoked an emotional response from viewers, including an entrepreneur from Bali, Niluh Djelantik. She was present at the scene and mediated the meeting of the two parties.

The foreigner, who was later identified as Muhammad Ali El Hage, apologised to the owner of the boarding house I Nengah Jana on Thursday 1st September 2022. He also gave Rp2 million to pay for boarding fees that had not been paid.

He admitted that when he spoke harsh words and made threats, he was beyond his control. He further admitted that he was under pressure.

“I was not drunk, I was just stressed, I’ve been under pressure, you know I promised to pay on 28th August because my money was withheld,” he said.

In a statement written on Instagram on @niluhdjelantik, documents and evidence of verbal violence by this Lebanese man will still be submitted to immigration authorities.

Also Read How to get deported from Bali