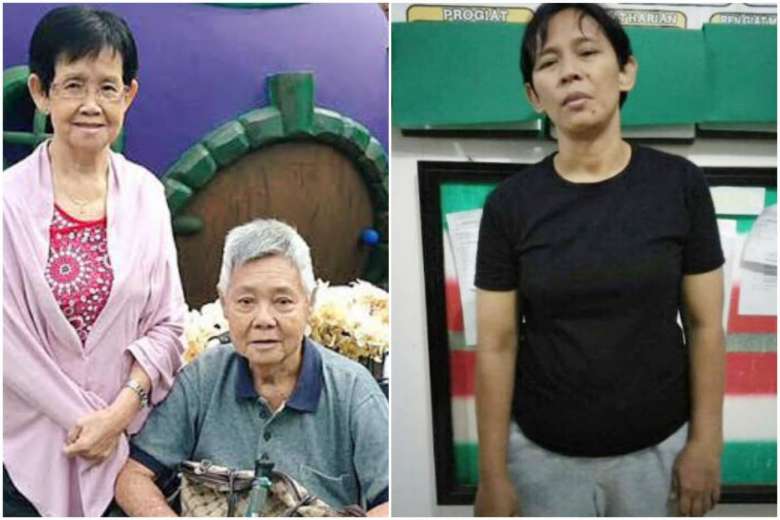 An Indonesian woman employed as a domestic worker in Singapore is alleged to have murdered her two elderly employees before fleeing the country in a case that has captivated the city-state.

Khasanah, a 41-year-old Indonesian national hailing from Kebumen, Central Java, is alleged to have murdered Chia Ngim Fong, 70, and his wife Chin Sek Fah, 78. The couple were found dead and tied up in their Bedok Reservoir flat June 21.

The case, now known as the ‘Bedok Double Murder,’ has enthralled Singaporean media after Khasanah, who had only been working for the family for a month, had already fled for Indonesia by the time the bodies were discovered.

The suspect reportedly told witnesses how she managed to escape the country without using her passport.

“Khasanah told us she hid in the engine room of a ferry bound for Batam. She said she had to hold her breath and not cough to prevent herself from being caught,” a witness identified as Mr Hariyanto told the Straits Times.

A tip-off led to the arrest of Khasanah at Hotel Kuala Tungkal in West Tanjung Jabung Regency, as reported by Tribrata News a week after the deaths on June 28.

According to the tip-off, she was overheard talking on the phone in an internet cafe saying she wanted to “repent and stay in a religious school.”

She also reportedly asked about the condition of the elderly couple and appeared to be unaware they had died.

Officers from the local police were able to track the suspect after a hotel employee confirmed the name of the fugitive matched that of the guest.

Police raided the hotel room and seized several items, including two iPhones, a laptop, cash in a variety of currencies, watches, a jade bracelet and a gold necklace. It is believed the cash and valuables were missing from the home of the victims.

“Based on the facts of the case, it may be considered a premeditated murder. She had planned the act, down to buying rope and tape (to restrain her victims).”

Setyo added that if convicted, Khasanah may face 20 years or even the death penalty.

As reported by the Straits Times, Khasanah is now in the national police detective unit’s lock-up. In accordance with Indonesian law, she will not be handed over to Singaporean authorities instead investigators from both countries will work together to build the case.

“Indonesia adopts the principle of ‘personaliteit.’ Personaliteit requires that any Indonesian arrested in the country for a crime committed overseas be processed in Indonesia instead of being sent to the jurisdiction where the offense took place,” the Straits Times reported.

See: Dissecting The Demise Of 7-Eleven In Indonesia