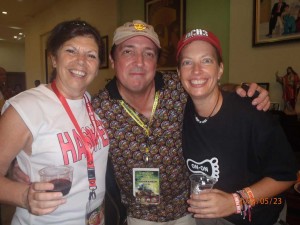 How did you end up in Bali in the early 90s?
I had a nightclub at the Hilton in Amsterdam called Juliana’s and I sold that and decided to go for a holiday in Bali. Then somebody offered me a job in Shanghai. They said, “So what do you do?” I said, “I ran a nightclub.” Then they said, “Ah, we’ve got a nightclub, do you fancy it?” and I said, “Yeah, great!” So, four months turned into a year and a year turned into five years and I was in the opening team of Hard Rock Hotel in 1998. I just finished at the Bali Dynasty and I quit my china job to work on the Interhash full time.

For those readers who don’t know, what exactly is the Hash?
The Hash started just after the war in 1947 I think and how it started was these two guys were still doing jungle patrols, but the war had finished and they got a bit bored of doing patrols all the time so they started doing this thing called Fox and Hares where they lay a paper trail and the rest of the guys follow the paper trail.

They had a club where they would go to have a couple of beers after they finished their patrol and they used to serve hash, which is potatoes and corned beef and onion so they called it the Hash House, and the Harriers came from the running club. So Hash House Harriers were born from the war. Kuala Lumpur were the first ones to have a club and it spread to Singapore and all over the world after that.

What happens at the Hash?
You go for a run (or a jog) following a paper trail that’s been set specially and the runs are generally eight to ten kilometres long, never more than an hour. Then after the run you all get together for a few beers and what we call ‘Down-downs’.

I’ll remember that for next time! Does the beer-drinking get balanced out by the running do you think?
I think so, yes. Running is important to a lot of people. Some of them are really fit looking guys and the age group is between 35 to 85, like with Hanoi Bill who is our oldest Hasher.

And you’ve got Hash runs specifically for families and women right?
Yes, there are. In Bali there’s a Saturday run for families only and a men’s only run, too. Ther are five clubs in Bali made up of a bit of everything really.

Why do you think it’s so popular here?
Fun, Fitness and Friendship is the saying and members treat it more like a social club rather than a fitness club to be honest, which makes it so popular.

I notice everyone has a special Hash name – can you explain yours?
Mine is Disco Wanker because I used to run a nightclub. It’s an embarrassment really. Some names are worse than mine though!

I bet. And what is the Interhash?
We’re up to the 18th world Interhash at the moment and it’s been in places like Malaysia, Thailand, Australia, UK and the next countries that are bidding for it are China, Fiji and Belgium. I hear the buzz is that it’s looking good for Belgium at the moment. So the new place was announced last Sunday and two years later we all head off to the next place. The Borobudur Interhash just gone was between May 22nd and 29th, so a whole week of festivities.

You must’ve been extremely busy. So what was the rundown of your Interhash?
It started with a VIP party for all the government people, our sponsors and Luminaries (the famous people of Interhash). Then we did a Red Dress Run, where runners all have to wear red dresses, and all the proceeds go to charity. We’re building a school in Magelang for handicapped kids so at least something good for the community comes out of it.

So there’s never a dull moment for you?
No, and then a big party afterwards. Then there’s a rugby match followed by a welcome party which all the runners attend, including the President which has never happened before at any of the Interhash events.

Great work Steve! To get in touch with Steve, email him at [email protected]