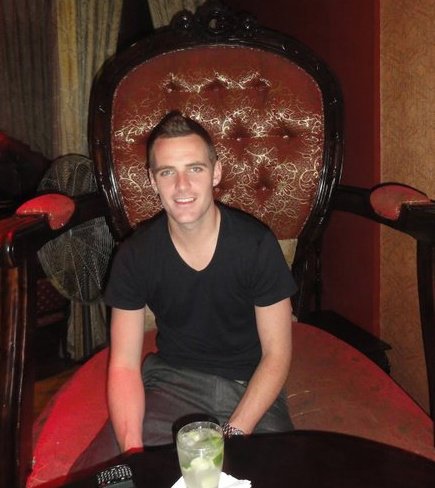 Hello Gordon Boyd! The Scotsman with an American accent who plays football and surfs religiously.

That’s a very Scottish name you have?

Yup, I’m originally from Scotland. Both my parents are Scottish, but I was born in South Africa and I grew up in Australia, Singapore, Thailand and Indonesia.

A well travelled man. So what brought you back to Jakarta?

I moved to Jakarta with my family and went to Jakarta International School. I graduated in 1999, moved to Sydney in Australia for university and moved back to Jakarta after that. I came back because I wanted to come back – I love Indonesia! Out of all the places I’ve lived I’ve spent the majority of time in Indonesia so I kind of consider it home.

What do you do for work?

I work for Tide Water Operators Indonesia as their Marketing Director. It’s just a fancy name for a guy who goes to gets contracts with oil and gas drilling managers. I’ve been here for four years now, originally starting with the company as just a marketer. I spend most of my time meeting with oil companies like Chevron and meeting the drilling managers or logistics guys because they’re the ones that do all the contracts.

Do you feel you can be as active in Jakarta as you used to be in Australia?

If you can deal with getting to places where you can exercise then it’s not an issue. There’s a sports club in Ciputat called ISCI and you can do everything there. I used to play football up there on Thursdays and Sundays but traffic is bad so I play Futsal in Kemang or at JIS on a Wednesday night.

What is this obsession with Futsal?

Futsal started to become an obsession in Jakarta two or three years ago and got popular really quick. It’s an easy outlet and fun to do. You just need ten guys or less and an hour of free time, so guys with families get home by 7.30 or 8pm. It’s a good workout because it’s non-stop for an hour.

How seriously do you take football?

I used to play for the Sydney University Football Club and Karawana which is like the New South Wales Super League or Premier League, so I was semi-pro so I guess I take it quite seriously!

So why did you stop?

It’s a funny story actually. I signed a contract with the premier league team, but then I graduated and had to leave because they only gave out visas for the league above that. There was an issue about me graduating because of credits and after discussions, it turns out the university had miscalculated my credits so I had to graduate in December that year and couldn’t stay on another year!

Bummer. Do you still play football in Jakarta?

Yes, in the Expat League. It’s called the JIFL (Jakarta International Football League) and consists of 12 teams. Once a week there’s a game and each team plays.

Do the guys take it seriously?

Yeah they do actually. If you ever go to one of these games you’d be surprised at the language used and even the arguments between team members. Sometimes players storm off!  They get pretty roudy. It’s pretty competitive. There are a lot of good players and some are even ex-professionals who have played in the world cup. They all take it seriously. My team are mainly teachers so they’re not too bad.

And your team are…?

The Jakarta International School team which was formed by a couple of teachers, so a majority work for JIS or are ex JIS kids, like me. But you can still join even if you have no link to JIS.

If someone wanted to join the league, what do they need to do?

Just go to www.jifl.org where you can find bios of each team and contact details of the managers. There’s a league committee that has meetings every month so if you want to choose a team, you can check out the other teams. I’d advise joining the team because it’s a great way to meet people if you’re new to Jakarta.

Beside football, what other sport do you love?

Surfing! I started when I was 12 years old here in Indonesia. The best surf spot so far in Indonesia I can’t tell you that but Mentawai is the best in the world, not only in Indonesia. I used to go surfing every second weekend, but now probably once a month. Usually to Bali or Pelabuhan Ratu. There’s great surf down there at a spot called Cimaja which has a nice wave that breaks well and a long right hander.

So do your future plans involve sticking around?

I plan on sticking around for life. I can’t see myself anywhere else. Maybe Bali in five years time when I’m a little bit older and more mature!

To get in touch with Gordon, email him at [email protected].