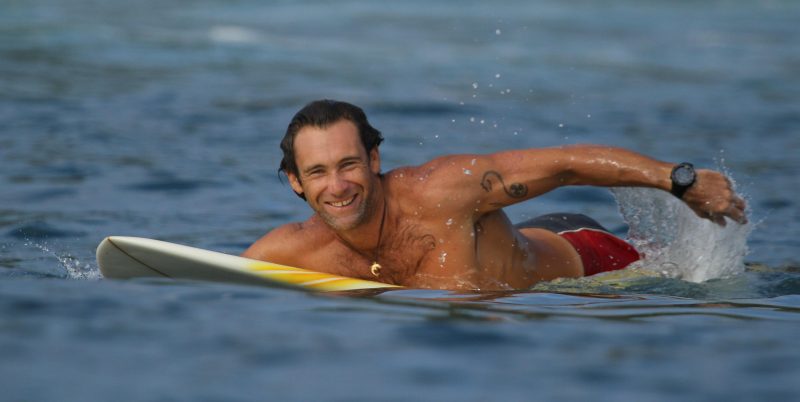 Current World Champion of the World Adaptive Surfing Championship (WASC) shares his epic story of survival and the power of the human spirit. The film Devocean has just been released about the life of this spirit warrior, sea captain, engineer, adventurer and world traveller.

Tell me about your early life.

I was born in Zimbabwe in a small town called Bulawayo (Rhodesia at the time). My parents were shot down in a passenger plane during the Hunyani Disaster by ‘freedom fighters’ and were the only husband and wife survivors amongst a few who lived. In 1978, we moved to South Africa. Each traumatic situation in my family’s lives created a way of thinking which takes one to another level of being; creating a perspective which makes life far easier, and even in difficult times has helped us to survive.

What inspired your passion for the ocean?

I discovered my love of water at Lake Kariba on the borders of Zambia and Zimbabwe. One day I paddled out across the lake on a windsurf board, catching a tiny wave, and I knew this is what I wanted to do. I never saw the sea until we moved to South Africa. I decided I never wanted to leave the water again and I never have!

Tell me about your life-changing accident.

I came to Indonesia in 1994 as a captain on a surf charter boat in Sumatra. I flew back to South Africa and on the way to the airport to return to continue to captain the yacht, driving a convertible with a beautiful girl, we got carjacked. They shot us and the car rolled.

It’s a bit of a blur but I remember they grabbed her and they beat me up. I was half out of the car, legs stuck, seatbelt on, and the car rolled again, breaking my back and landing on top of the girl, burning her. I laid in and out of consciousness hearing her screams for hours and when the ambulances came, two rescue services spent hours fighting over who would take us to hospital. There’s a chance had I been brought to hospital sooner they could have saved my legs.

We had no insurance and my parents lost everything. For five years I was a mess. Strangely, before this accident I was sitting on the surf yacht in Sumatra talking to a guy about our greatest fear, both agreeing it was losing our legs. Three months later, also in South Africa, he breaks every bone in his body and can’t walk. A few weeks later I am in the exact same room with the same nurses who cared for my friend! I think we attract what we fear most.

How did you begin ‘living life’ again?

After five years of personal rehab, including trips to San Diego and London for medical consultations and even visiting a Shaman in Brazil, I accepted my condition and got on with my life and started sailing again. In Mozambique, I met a wealthy guy who liked my idea of doing my own charter in Indonesia; and he actually traded my boat for his catamaran! That is the boat I spent many years living on, even surviving the tsunami in Thailand.

How did you survive the tsunami in 2004?

I was alone on the boat in Phuket and had just dropped anchor when here comes this tsunami! I managed to make it over the wave. After that, my old friend I knew from my old charter days got in touch and invited me to bring my yacht to Bali where he had a place at his beach club in Sanur to moor it. Now I’ve been living here a dozen years and Mario is still one of my closest friends here in Bali.

How has Bali impacted you?

What I find with Bali is that the attitude you arrive with is what you’ll get back. If you come with a negative attitude, enjoy your negative experience! If you come here with a positive vibe and just go with the flow, there is an energy here which compounds that and can have a huge positive impact. I have seen the huge change here since the early ‘90s but the essence and spirit of Bali remains the same.

You are a sea captain and you also free dive, scuba dive and surf. Which was the greater challenge after your accident?

I was always an avid diver so that was an easy transition; like an astronaut who loves being in space, I took naturally to flying around in the depths of the ocean. The tough one was surfing, but I got it down. I tie my legs and use a specially designed board like a fish. I surf along with my friends, pushing the waves and getting thumped! I have become so in tune with the water and the surf break, so for me it is second nature. So much of surfing is being at one with the water and the currents and you get to the point where you can feel the next break before you see it.

Tell us about winning the World Adaptive Surfing Championship.

I arrived at the championship; no board, no sponsors, no team. Every country had teams with physiologists, specialists, and sponsors – the whole deal. With my Danish passport I represented Denmark. I borrowed an old single fin and went out and ended up winning the championship! I have this belief that with minimal resources we can accomplish great things as humans.

I know you have a funny story!

A few years ago in New Zealand, I borrowed a van and camped around. One day I paddled out to spearfish about 700 metres offshore. Paddling back in the afternoon, I see a yacht and paddle over. I see and old school friend I hadn’t seen in five years. I jump on the boat; we have a beer, and eat this fish I caught.

At about 9pm I paddle back, and as I approach the shore I see all these flashing lights, an ambulance, police, divers, and a forensics team taking photos of my chair. Turns out a lady walking on the beach saw my chair floating in the water and called in a suicide alert!

I paddle up to the guy in all his gear taking photos and say, “Hey mate, that’s my chair!” He looks at me all shocked as I explain I had just been out fishing. After proving I am who I say I am, one of them says to me, “Bruno, one thing I must ask of you…looking for you cost us about $20,000, so next time please make a sign and hang it on your chair which says ‘gone fishing!’”

How did the film Devocean come about?

I went to the Australian Ocean Film Festival held in England in 2015. I met the director of the festival and showed a trailer my South African friend had put together on me sailing. She told me to do a film and bring it back next year. So I came back to Bali and partnered up with a filmmaker. I wanted to make a film showing what one can do in a wheelchair. So we shot it and submitted it. They loved it and it showed at the Ocean Film Festival and toured the world in 2015. Maka Ramos, who did a brilliant job shooting and editing, put the film together on my budget of US$1,000.

What are your future plans?

Beginning in June, I fly to the west coast of America for a sail race, the Race to Alaska; just me and another guy in a wheelchair yacht racing. In July I’ll be giving a talk in New York about my life. Then in August I go to Hawaii to be in the Duke Ocean Fest surf competition. Then I will hang out in California until the WASC in San Diego again to defend my world title.

So, as much as life is challenging being in a wheelchair, I have grown and realized great potential being challenged. I find life humorous. We have to laugh; it’s what gets us through life.