They don’t call it the wet season for nothing. Buckets of rain are pouring and winds are howling from the west. Trash is washing up on Kuta’s beaches and humidity levels are high. The Wet Season is in full bloom and is only just getting started in January. For surfers this means that the usual spots from Uluwatu all the way to Canggu are not going to be working. Why? Because of the wind.

The wind blowing on any given day will typically dictate where one can surf in good conditions. During the high and dry season from May to October the trade winds prevail from the South-Southeast and blow offshore (or off the shore towards ocean) on most western-facing beaches, which smoothes the incoming waves. This trade wind is ideal to surf the famous spots like Uluwatu, Padang Padang and Kuta. During the Wet Season (roughly Nov-April) that wind shifts and starts blowing out of the West, roughing up the sea surface at these spots, pushing waves faster towards shore and causing them to break prematurely with poor shape. This strong onshore wind (blowing onto the shore) makes for really messy surfing conditions and when rain or even a tropical cyclone like we had in these early January days pushes westerly wind gusts 30 knots and higher this creates a howling onshore wind on Bali’s western coasts that is terrible for surfing.

So where do you go to surf in the wet season? Rule of thumb on any island is onshore wind on one side means offshore on the opposite facing coast. Cleaner more ideal surfing conditions are still on hand and all you need to do is search surf breaks where the winds are favorable. In this case we are talking about Bali’s eastern-facing coastline. 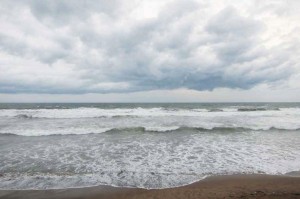 Serangan is a local favorite go-to reef break due to its consistent size and that it is good for all skill levels. The wave in front of the many beach warungs is a left and right peak, meaning it breaks both ways, with all variety of rides: hollow, not hollow but long, short, and most of all, fun. This also means that it is one of the most crowded spots because you can surf there most days in the wet season and it is not life threatening, well, maybe when it’s really big. Don’t be put off by the garbage dump at the road entrance because the laid-back beach and fun waves are worth the drive to get there.

Serangan used to be a separate island off of Bali with a sacred temple and was a secret surfing spot only accessible by boat. A massive hotel project land filled the water between Bali and Serangan all the way to the surf break, but when the Asian Monetary Crisis of the late 1990s hit, all work stopped on the project but the landfill and road remained, giving surfers driving access to this great wave.

Before anyone knew anything about Serangan the Wet Season favorite spot for years was Geger Beach in Nusa Dua. Geger picks up waves from any direction and may just be the biggest wave on Bali on any given day. It is also quite a mission to surf with a long paddle out and back to the break (many take the boat service) and river-strong currents to paddle against. Geger can be a complicated wave that seems to always shift and break where you are not. But when all the surf elements come together Geger is a freight training right hand reef wave that breaks long and hard with plenty of room to move when the waves are 2 or 20 feet high. Geger itself is a stunning golden sand beach that was a favorite beach of Bali for many years. Just recently most of Geger has been developed into a huge luxury hotel project with only a sliver of the original beach remaining. It is still nice and the waves are still there, although these days less crowded than before since the discovery of Serangan. 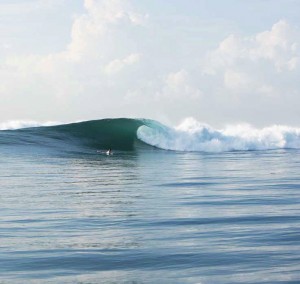 For those serious about surfing Wet Season waves Sanur and Keramas are the call. Sanur Reef in front of the Grand Bali Beach Hotel only breaks properly a handful of times each year when the waves are big but when it does it is world-class perfection with long high-speed rides that offer several opportunities to get barreled and show-off maneuvers on one wave. The downside is that Sanur Reef has a reputation for having the sharpest and shallowest reef on Bali. The further you go the shallower it gets and that tempting wave you are surfing that pushes you further on might just grow teeth at the end, especially at low tide.

Keramas is another world-class righthand wave that has only been surfed regularly for a little over 10 years when the Ida Bagus Mantra Bypass was completed along Gianyar’s coastline. This gem of a wave was discovered off a rice-field beach road where a trail led to a black sand beach with views of Mount Agung in the “During the Wet Season (roughly Nov- April) that wind shifts and starts blowing out of the West, roughing up the sea surface at these spots, pushing waves faster towards shore and causing them to break prematurely with poor shape.” background and a machine-perfect  wave in front. Big barrels and high performance waves bless Keramas, a surf spot that has been on countless surf videos and magazine covers around the world. The crowds like this place too, but with the amount of good waves coming through in a session this wave can be rewarding if you are patient. It is true that the Wet Season has often been called Bali’s “Off Season” for surfing. Of course you might have to deal with driving through a tropical monsoon to get there, or possibly being caught in a thunderstorm while you are out surfing. But that is the beauty of chasing waves in Bali during the Wet Season. With a little searching and a little local knowledge one can still find a decent to good surf on most days. And with a little luck you might just find a break all to yourself.