Cricket’s history may be lost in the clouds of time, but the future is bright.

When it comes to the great cricketing arenas of the world, Cibubur and Karawaci may lack the visual impact and emotional baggage of the Melbourne or Lord’s Cricket Ground. But it doesn’t matter. The five-day test matches may be the ultimate test of skill in the cricket calendar but its life and soul lies in the village greens of India, England and Australia where enthusiasts gather to enjoy their passion for the willow and the leather.

For many a connoisseur, there is nothing to match the serenity of lazing in the favourite deckchair, listening to the sound of bat on ball, all the while living in fear of that dreaded, but still perfectly gentlemanly call of ‘howzat’ should ball hit pad. Then, all eyes will focus on the umpire, bedecked in sweaters, and that dreadful moment; will he or won’t he lift that index finger and send the hapless batsman back to the pavilion? That long, lonely walk played out to a ripple of gentle applause from friend and foe alike.

Perhaps it’s the Dutch colonial heritage but Indonesia lacks any cricketing pedigree. At the time of the Krakatau volcanic eruption in 1883, there was a game being played between the Batavia Cricket Club and a travelling circus on land where Monas now stands. While tantalising, mentions of the Singapore Cricket Club visiting Batavia tease the historian, but details remain elusive.

Old hands have suggested games continued on into the 1960s before the government decided the country’s need for a national monument was far greater than a few eccentric expats playing an unfamiliar game. It wasn’t until the final quarter of the 20th century that cricket started to take a foothold and become organised.

One unlikely area where the game received a boost was Kupang, way out east in West Timor. An Australian named Bruce Christie arrived to take up a position as a vet. As he settled in, he decided he needed to do something to keep his 11-year-old son busy, so being a ‘fair dinkum’ Aussie, he encouraged him to take up cricket.

As you can imagine, two people playing cricket wouldn’t have made for the most thrilling of challenges, so tapping into the existing expat scene in his new home, Christie encouraged a local teacher to support local kids to take up the game.

Pretty soon there were two- or three-dozen enthusiastic teenagers getting to grips with this strange game.

“The locals picked up the game pretty quickly as they’d played kasti (a local bat-and-ball game) before and they were good at throwing stones at birds or whatever,” recalled Christie in a later interview. “ I also had videos and books to show them. We also had an Australian female teacher in Kupang who played with us. I think she attracted the locals to join.”

The skills developed and pretty soon full-blown friendlies were being played at the Kupang football stadium between Christie’s eclectic trainees and local expats. 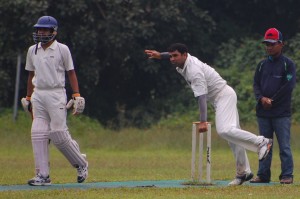 One of the local lads who took to the game in those early days was Soni Hawoe, who later went on to represent Indonesia at regional events such as the East Asia Eights and the East Asia Pacific Challenge. Today, Soni is still actively involved in cricket as the International Cricket Council (the game’s world governing body) coordinator for Eastern Indonesia and was recently heavily involved in the prestigious Bali International Sixes as Tournament Director.

You can’t help but wonder what Soni thought when he first saw these foreigners set up the wickets and bails for the first time near his village. Little could he have anticipated where the game would have taken him, but he doesn’t seem too perplexed as he remembers those days.

“At first the rules were quite complex, but as we had experience of playing kasti, we soon became used to the game,” he said.

For those who miss their fix, Jakarta boasts a cricket league of its own. Two-division affairs with fixtures throughout the year, enthusiasts gather at the limited number of arenas in and around the capital and immerse themselves in the culture of the game.

The league began in the early 1990s with the likes of ISCI, Rebels, Senayan and Ceylon among the early winners. Latterly the competition has been dominated by WISCI Wanderers, runners up in 2010/11 and champions in 2011/12, 2012/13 and 2013/14 and they stand well-placed to continue that success as this season reaches its climax.

Thanks to the tireless work of those behind the scenes, and in no small measure to the tireless Soni, more and more Indonesians are taking up the game with batsman Yeri Rosogna becoming the first local player to score a century. For his efforts he received an award from Australian legend former fast bowler Merv Hughes, an intimidating sight in full flow back in the day.

With a number of crucial games to be played to decide the 2014/15 champions, check out the Jakarta Cricket website if you are interested in catching a game with the grand finals on 31 May. With the exciting climax to the season promised, games will be played at Cibubur and the Ghandi Memorial International School in Kemayoran.