Tugu means memorial and memorial is an apt name for this old suburb up in North East Jakarta by the port for this may well be the longest inhabited community in Jakarta. Shards of pots and pans, the sort of thing that gets archaeologists all excited while boring the pants off many museum visitors, have been found in this area dating back several hundred years.

Tugu Prastasi dates back to the 5th century and at that time would have been located much closer to the shoreline. It is a boulder with an inscription carved on it using a Sanskrit type language called Wenggi and has since been relocated to the National Museum while its original location is now better known as Jalan Pengangaan Dua in modern day Kelapa Gading and is indistinguishable from the other concrete dross that makes up Jakarta today. It talks about the digging of an 11 kilometre long canal in three weeks during the Kingship of Purnawarman by priestly Brahmans, payment being in the form of 1,000 cows. Not quite Shaz loves Gez or Arsenal rules in the graffiti stakes but I’m sure at the time receiving all that beef must have meant something.

Things happened here for another 1,100 years but no one saw the need to keep any notes so while we know that nearby Sunda Kelapa became an important trading entrepot for the spice islands, no one saw fit to mention this particular area. But in 1661 there were all sorts milling round the eastern oceans, changing the landscape, killing people, getting arrested and generally being a nuisance. One such group were slaves. Often the offspring of intermarriage between Portuguese colonials and local people (when I say local we’re covering a region from Goa eastward here) who were frequently frowned down upon by everyone really. The Dutch didn’t like them, arrested them after taking Melaka and used them as slaves. Some found their way down to Java and a group of 21 families who had originally hailed from Bengal and the Coromandel Coast in India were given their freedom upon converting to Calvinism. Oh, and they were given some land as well, said land being Tugu.

To the north east of Jakarta’s main sprawl out past Tanjung Priok, but within rock throwing distance of Tugu lies what was once the scene of the largest naval action in the east until the second world war. A British armada of some 100 ships carrying 12,000 men laid anchor at the mouth of the Cilincing at 2 pm on Sunday August 4th 1811, their mission to invade and conquer the island of Java, being ruled by the Dutch with some French input.

Java was and of course still is the pivotal point of a large sea trading nation and you would imagine 100 foreign ships turning up in your front garden might have excited some comment or reaction. Instead the invading armies, divided roughly between European and Indian forces, landed under the bemused eyes of local fishermen who probably decided that Sunday may be a good day to rest. Battling contrary tides the worst the forces suffered were some pre invasion meals being regurgitated into the bay. 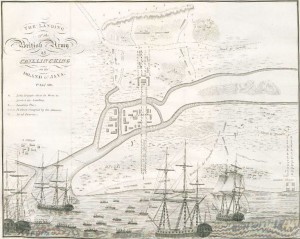 A map showing the positions after landing makes interesting viewing. A frigate, named Leda, blocked the river mouth while small rafts ferried the troops ashore. Once on land they would have waded through morasses to build defences which were set on the roads in the area; one heading to Batavia, the other to Cornelis. Yes, just two roads!

Cilincing itself appears as a couple of islands between a river and a canal. The Dutch had thoughtfully left the bridge over the canal standing thereby doing their best not to impede the invasion too much. Head quarters was set up just to the south of the rivers in a house built in the 1700s by a prominent Dutch landowner named Julius Vinck who also made his mark in neighbouring Tugu. It would have been here the force commander Auchtemy and possibly Raffles, the man chosen to lead a new Java spent their first night in Java. Around them were rice fields and tree clumps with isolated kampungs by the sides of the innumerable streams while being so far from Batavia strong walls provided defence against any locals who weren’t overjoyed by their landlord.

After roughing it under the stars the next day was wagons roll. Tugu was reached, the church there is marked on contemporary maps as Suyrannah, while along the north coast they passed Tanjung Priok and by the Tuesday they had reached Ancol. If they had waited 180 years they could have got the toll road, got stuck in the traffic and never made it into Jakarta!

Some of the invading forces, well at least a few European officers who died are buried or remembered in the grounds of All Saints Church which is near Gambir Station.