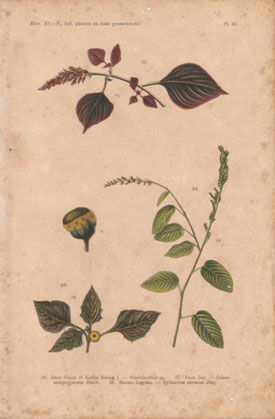 I remember friends and family with small children regularly consulting their well worn copy of Baby and Child Care by Dr Benjamin Spock, first published in 1946 and selling over 50 million copies.

A similar book was first published in 1911 called Wenken en Raadgevingen Betreffende het Gebruik van Indische Planten, Vruchten, enz. (Tips and Suggestions Regarding the Use of Plants, Fruits, etc. from the Dutch East Indies) and was written by Mrs J. Kloppenburg-Versteegh. It was specifically meant to provide a DIY-approach to family health care. Families, that is, who would not have reliable access to qualified medical care. The book comes with an Atlas containing 131 drawings of medicinal plants mentioned in the book.

In those days it was said: Child ill, check it out in Kloppenburg, which involved the following steps. First, one had to check the disease and symptoms in Part 2 of the book, from where one was referred to the prescriptions; Part 1, the botanical section, described the plants needed to prepare the prescription, and the Atlas, for clarification, provided illustrations of some of the plants and herbs used for the cure. Sounds easy, but it wasn’t, as the preparation did require a lot of dedication, precision and hard work. To chew the capitula of the giant legetan (Spilanthes oleracea, Jacq.) to soothe a toothache was, apart from getting the plant, fairly easy.

But the preparation of other medicines was not.
The book was, however, widely used and an absolute necessity because suitable alternatives were either not available, or of disturbingly low quality.

The author lost a daughter to typhoid fever. On the advice of the attending ‘medical practitioner’ she was, however, treated for malaria. The practitioner was later exposed as a charlatan. This experience and the realisation that medical care was in such a dire state, made Kloppenburg decide to deepen her knowledge of herbal cures, turn her hobby into a profession and put it all on paper for the widest possible distribution of its benefits.

When reading through the Tips and Suggestions it becomes clear that stomach and intestinal disturbance was one of the major problems faced by the inhabitants of the Dutch East Indies, as Indonesia was then still known. Nearly one-quarter of Part 2 is devoted to this disorder. 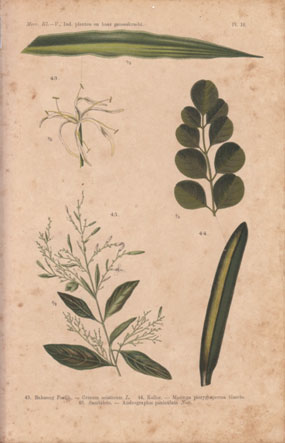 Surprisingly, few paragraphs deal with preventative measures. There is nothing on boiling drinking water and washing hands. The spreading of germs and contamination was to some extent known as servants were accused of being the main source of skin diseases and eczema, and a warning was sounded to not have the laundry done by an outside washerman in times of typhoid and cholera.

And as maybe could have been expected, there is nothing on hot present-day topics such as breast tumours, cancer, cholesterol, enlarged prostate and ED. But an interesting entry is appendicitis.

Rather than advising an operation and hospitalisation, total rest and liquid food only is described, together with a medicine derived from the leaves of sambiloto (Andrographis paniculata, Nees): 20 leaves to be crushed in a mortar with a shot glass of water, strain through cloth and drink the liquid, daily.

This advice for non-surgical intervention is likely due to the then lack of hospital facilities and surgeons, and the poor state of medical care in general.

It should however, be emphasised that Batavia, in the time of Mrs Kloppenburg, was a place where marshes, stagnant pools and canals clogged with all sorts of refuse and dead animals, creating such pestilence and vile poisonous miasmas, becoming known as the Graveyard of the East. Nowadays, most of the old canals have been filled in. Jakarta’s 13 rivers, numerous canals and thousands of drains remain, however, clogged, but now with plastic bags, styrofoam and anything Jakartans—and that includes you and I—tend to discard.

It all washes into the rivers… A few years ago, during a Jakarta Flood Prevention study, it was found that cleaning and dredging of the rivers, canals and drains would reduce flooding by 60%.

Anyway, compared to the Kloppenburg era we are much better off, really, a lot better. If your child is sick, there is no need to concoct your own cure, there are many good paediatricians, and for general health care: SOS Medika, Global Doctors and many other clinics and general practitioners.

But don’t forget to take your vitamins!

The Science of Life Through Ayurveda