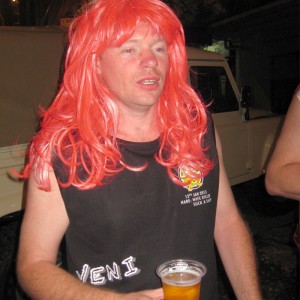 Approximately 100 runners arrived at Everest Bar in Blok M from 1pm onwards on the 9th November. Keen long runners on the first bus alighted at Monas, Medium Runners on the next bus at Bunderan HI and short distance runners on the third at Dukuh Atas. The local passengers were shocked to see a bunch of hairy bules in wigs and lipstick mingling in their finest red negligees and dresses with an equal number of the female sort in similar attire.

The run route had us setting off at 3.45pm and promptly bewildered inside Taman Monas, with us spread out looking for paper before separating into a couple of groups and finally meeting up on the southeast corner having found no paper.

Unconstructive wandering finally found us heading towards Jaksa where we found paper again. Also, a couple of hoons and one harriette, who shall remain nameless, found some more refreshing fluids available for imbibement, a chance not to be missed. The front runners had by now disappeared to leave the beer drinkers alone, only to meet them face on running back towards Jaksa, and then taking the turning they should have spotted had they had their beer goggles on.

The maze of Menteng then broke us up into hardened fools and gentle walkers, taking us to the northern end of Rasuna where a quick left turn past the local puppy market had us running adjacent to the canal; a short hop over the levee had us running back down along the banks of the canal dodging the advances of the local ladies of the day with their abundance of makeup and smiles at potential customers. These advances were coyly dismissed by the hoons as there was a far better reward at the end of this run – ice cold refreshments.

Once back onto Rasuna, we headed underneath and past the Four Seasons before finally catching up with the medium runners. Confusion reigned again before the sensible runners made a route towards Kuningan to the first official beer stop at the Everest Bar, Bellagio, for a well-rewarded cooling amber refreshment with the finally caught short runners. 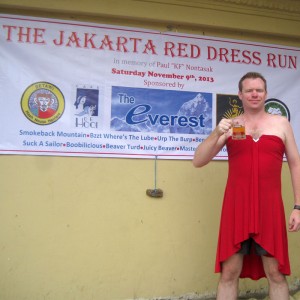 Drinks a-plenty, only a few made the effort to continue the run, as laid by the hares. Darting out of Bellagio, suitably refreshed to make in a generally southerly direction before crossing Gatot Subroto, runners slogged home to Blok M along Tendean and Monginsidi to bring back to the start, with more ice cold beer and soup at Everest Blok M.

In total, the four long runners who did not take taxis managed a respectable 18km during the two hours on the road, finishing at Blok M around 6pm. The rest of the 100 runners made extensive donations to the hash taxis, otherwise known as Bluebird, to meet the sweaty front runners for copious amounts of beer, a bit of food and a robust circle of peers extensively ribbing each other for dressing as fairies. Medium runners managed about 10 to get as far as Bellagio, short runners about 6km before taking the taxi home.

Run fees and donations amounted to approximately 10 juta being delivered to each of the charities: Yayasan Lestari Sayang Anak in Pondok Indah, and Sekolah Bisa in BSD.

Golf Should Be Fair