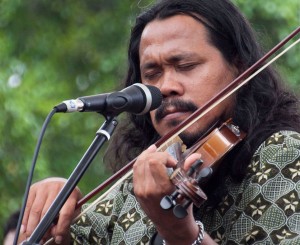 If you live in Jakarta, it is easy to get distracted by the mess of the city; the mind-bending traffic, the corruption, the pollution, the mind-blowing poverty; it feels like a city that is about to self-combust while you can only sit and gape and wonder, who is doing anything about this mess? Does anyone care? And then one sunny morning you find yourself meeting a person who gives you a little hope, who journeys into the cracks of Jakarta, who isn’t thinking, “How can one person make a difference?” and who is instead taking action to improve the lives of the people around him without the expectation of fanfare or personal gain. Hidden amongst the mayhem of Jakarta there is a tranquil, clean, green and lush park, where the birds sing along with the melodic tunes of a group of talented musicians lead by Ages Biola.

Ages was born in a small village on the outskirts of Jogjakarta on 7 May 1970 and has led a colourful life of teaching and expanding his skills and knowledge in different areas, always trying to make his father proud and somehow feeling like he had failed, until he discovered his true passion, music. He joined Keroncong Tugu and is a member of the tenth generation of Keroncong in North Jakarta.  Ages also attended Pono Banoe Music College in Banten where he completed his Bachelor Degree in Music after only two semesters of the four-year course, due to his talent and previous accomplishments.

Whilst attending a workshop in Den Haag Keroncong in Holland in 2006, he noticed that European people appeared to have a keen interest in folk songs and he was curious as to why Indonesians weren’t as enthusiastic about their own music.  He realized that the younger generation of Indonesian’s knew little about traditional Keroncong songs and he decided he must do something about its conservation.

Jakarta has a wealth of talented musicians, many of which are street performers who are regularly picked up by police for disturbing public spaces, but no solution has ever been given to providing them with a platform for showcasing their talent to raise money for survival, they are just caught and released and the cycle continues. Ages had the idea that if he taught these street performers how to read music and play Keroncong, he could help them to secure a better future and so in 2006, Taman Suropati Chamber was established by Ages and three musicians he had taken from the streets.

With the introduction of shopping malls in Jakarta, so grew a new consumer lifestyle for Indonesians, with families spending their spare time and weekends indoors at the mall. Ages wanted to provide families with a better option that would allow them to spend quality time together and decided he would provide free lessons to children in the park as a cheap alternative to the mall culture.  Taman Suropati was chosen for its strategic central location to the city and also for the fact that it has so much security surrounding the area as its location in Menteng is also the home base for the US Embassy and the Governor and General of Jakarta. The park provides a beautiful natural environment for learning and the trees and fountains provide a perfect oasis from the chaos of Jakarta’s traffic filled streets.

One morning, whilst jogging around Taman Suropati, a journalist from the BBC heard the sweet melodies played by the Taman Suropati Chamber as they practised in the park. Not recognising the tunes he went to investigate and after discovering it was traditional folk music, which had been written by Ages, he decided to cover the story and share the music with a wider audience. A week later, many Indonesian media arrived at the park also keen to report on the incredible musicians and shortly after Taman Suropati Chamber grew to 200 members, which made a total of 400 people when they joined with the evening musical community Kota Seni. The students of Taman Suropati Chamber consist of a wide range of people, from children to adults, college students, office workers, and those who don’t have any musical background. They held their first concert in May 2007 at the Jakarta Convention Centre to an audience of 600 people, followed by another concert at Gedung Kesenian Jakarta, which they now play at annually, and also at TIM.

In the beginning, Ages financed the whole of Taman Suropati Chamber himself but as the group has grown he now has nine assistants to help with teaching every week and there are volunteers who print brochures and make a regular tabloid for the group. Those that can afford it, pay a small fee each month, but those that are unable to, receive the lessons for free. Through the fees they are able to photocopy music sheets for the students and provide transport for the teachers to attend the park every Sunday morning from 10am-12pm. As they have no money to pay for wages, Ages’ wife Yasminka helps to run administration and PR and his twin sons Vino and Visco along with his daughter Vanessa also assist with the teaching. Other teachers include Prapto, who is a violin maker and former street performer, Hendra (Prapto’s brother), and Dwi (Prapto’s cousin). They all live together in Ages’  house where he has taught them to be teaching assistants and members of his band who play regular gigs at Jakarta’s cultural events. Ages’ lessons concentrate on traditional Keroncong songs, the national anthem, and heroic songs from the past as today’s younger generation are not familiar with this music and he wants to conserve the music created in that era. His first priority is the conservation of traditional music and the second priority is to provide an option for people in Jakarta to have an alternative to spending time at the mall. Taman Suropati Chamber provides a recreative, educative and creative environment for its members. Recreative in that they can still be together with their families in the park, educative as it provides lessons about traditional music and a creative and new environment for people to enjoy.

In 2008 and again in 2010. Ages was invited to play music in the Presidential Palace in Jakarta, and as the leader and founder of Taman Suropati Chamber he was awarded a grant to play in the USA in May 2010, visiting areas such as Washington DC, New Orleans and San Fransisco where he gained many new supporters of Keroncong music.

Taman Suropati Chamber is a non-formal school and for those who aspire to a higher level of learning, there is the option to sit an informal exam with the teachers. Ages’ vision is for Taman Suropati Chamber to become a registered Outdoor Music College where he can prepare his own curriculum and books for students and his dream is to be able to integrate an exam each six months for members, where students would receive a certificate upon completion.

Ages would not only like to be a musician but also a humanist cultural campaigner as he also knows about gamelan, puppet playing, painting and he is able to both play and teach Karawitan (traditional javanese songs). His songs are currently in the recording process and there are plans for a video clip to be made in the near future. Taman Suropati Chamber is very important to Ages and because of his passion there are now Park Music Communities in Bandung, Medan and Makassar who teach traditional Keroncong music to Indonesia’s young generation with the assistance of Ages’ online mentoring.

It is through Ages’ true heart of gold that the traditional music of Indonesia is being kept alive, and if you feel like either partaking in the classes or just sitting and enjoying the music, then head down to Taman Suropati on a Sunday morning and leave the worries of Jakarta’s chaos behind you for a couple of hours as you experience something truly magical in this city.

How to Survive Your Expat Marriage in Indonesia

Music, Is It Here To Stay?