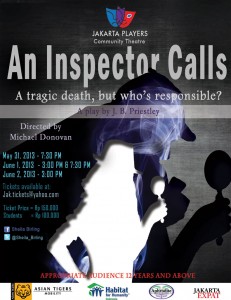 The Jakarta Players, a half Expat, half Indonesian community theatre ended their season with “An Inspector Calls” in an intimate setting at the American Club. The classic English play telling the story of a wealthy family, the Birlings, celebrating the engagement of their daughter when suddenly a singular police inspector arrives with shocking news, the suicide of a working class girl, shows that issues relevant 100 years ago are sadly still just as important today. Intrigue, laughs and food for thought.

First performed in 1945 as the Second World War was coming to an end, this play has gone a long way to end up being staged in Jakarta in 2013. J.B. Priestley wrote this play as a critic of the wealthy as the recovering world was desperate to know how this could have been allowed to happen? He blamed the wealthy and believed they had to take responsibility for the less well-off.  But a question remains: is the world a better place now?

Jakarta Players’ decision to end the season with this play was inspired by The Occupy Movement, explains the play’s Director, Michael Donovan. ”We questioned how it is that a small number of people seem to control a vastly disproportionate amount of the world’s wealth and how at this time, this is an issue that people are not longer willing to put up with.” An Inspector Calls seemed perfect to convey such a message. 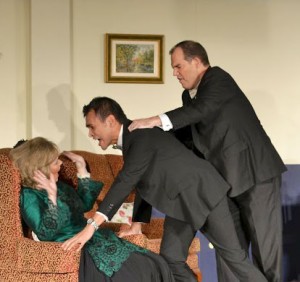 ”But staging such a play which is primarily written about Britain, for British audiences, set in the past and adapting it to a modern audience with a multi-national cast, showing that the issues which were relevant 100 years ago are still just as important today, was challenging,” admits Donovan. He adds, ” I was keen to keep the script as the playwright had written it to give us an echo from the past. However, I also wanted to bring the play up-to-date with the use of multimedia projections and the characters have mobile phones and Facebook and Twitter accounts. This is a play, relevant to our modern age. The Birlings are alive and well today. They still make their selfish decisions, minding their own business and looking after themselves.”

Even if the production’s budget is limited, which is obvious in the decor and mise-en-scene, there is some good acting going on. Among others, Soraya Somemadiredja, Indonesian-born, Philippine-bred and former resident of Canada and Uzbekistan, plays a convincing and emotional Sheila Birling, the spoiled daughter who develops a social consciousness. For this convinced environmentalist, An Inspector Calls highlights class divisions and ugly societal attitudes that still exist today: ”We can see the Birlings in ourselves and the people around us in how we brush off the others who are insufficiently important or from different socio-economic classes, races, ethnicities, or religions, despite the fact that everyone has life stories and is worthy of respect, from the ojek driver to the president, the housekeeper to the privileged expat.”

Sharing the stage with her is Angelica Reitsma, a Dutch expatriate playing the title role of the Inspector. She portrays an eccentric and intriguing female inspector Goole, delivering a convincing performance and a deep and appealing exit monologue, which reminds us how we are all intertwined and that the way we treat others matters. It was hard to believe that this was Reitsma’s first stage experience.

Jakarta Players is a not-for-profit group that began over 45 years ago by theatre-loving expatriates living in Jakarta, hungry for English spoken theatre. But today, it is a true community theatre explains Sharon Sobotka, Jakarta Players’ President. ”Jakarta Players is not only for expats anymore. Our active members consist of Indonesians as well as expats. You don’t need to have previous theatre experience, as long as you can speak and understand English well.”

Rizal Iwan, who played the very first Indonesian Eric Birling in the Inspector calls, can testify, ”I’ve been going to Jakarta Players’ shows since forever, but never had the courage to audition. When I decided to audition for the first time and the Director actually gave me a part, I panicked and tried to talk him out of it because I didn’t think I’d be able to pull it off. Thank God he convinced me to step out of my comfort zone. An Inspector Calls is my third production,” he says proudly. 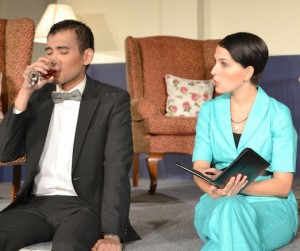 Jakarta Players is a community theatre but is as close to professional as community theatre gets. Sobotka points out, ”The Jakarta Players mission is to produce English spoken plays while employing professional theatre standards. We put all our energies into getting our shows produced, using as many professional techniques as possible while trying to keep escalating costs at a minimum. We aim to give our audience a great performance at an affordable ticket price.”

The group usually stages three to four plays every year in different venues across Jakarta. Ticket prices are normally around Rp.150,000 per adult and Rp.100,000 for children or students. All proceeds go to Habitat for Humanity Indonesia to help provide safe housing for the most vulnerable.

Next season’s calendar should be available in August.

To learn more about Jakarta Players visit: http://jakartaplayers.weebly.com or subscribe to the email newsletter at: [email protected]

Every Song Tells a Story