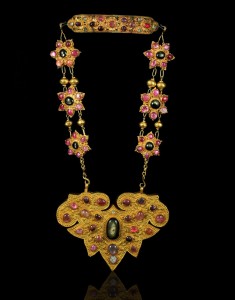 Encrusted with over 70 rubies from Myanmar, diamonds from Borneo and sapphires from India, and weighing over 200 grams, this large and impressive Balinese gold necklace is a rare example of an ancient tradition that traces its roots back to the royal court of the 14th century Majapahit Empire.

The shape of its centre pendant, described by some as a stylized leaf of the dukuh or breadfruit tree, is found throughout all the areas in Indonesia ruled by or influenced by the Majapahit including Sumatra, Java, Borneo, Sulawesi, Bali, Lombok and Sumbawa where inscribed stones dating from the 7th century are found near the eastern capital of Bima. It is hung from a twisted gold wire chain with three six-pointed stars on each side and a long rectangular clasp that is equally beautiful even though it would have been at the back of the neck.

The surfaces of all the elements are delicately worked. The edges of the leaf and settings of the gems in the central pendant element are framed with rows of circles representing celestial strings of pearls. A careful examination of the interior spaces reveals meandering and interlocking lotus stems and blossoms with the gems at their centres. Notably the techniques used for the stars and clasps are different, the former utilizing granulations and filigree, the latter cut out over a silver back – flowers all!

Although smaller versions usually of gilt were once common, examples like this piece are extremely rare and clearly belonged only to the highest of the high. Another beautiful example, once part of the royal collection of the Queen of Holland, was one of the most beautiful pieces from the Lombok Hoard, 230 kilograms of gold jewellery and objects seized by the Dutch Colonial Army from the bombarded palace of the Balinese King of Lombok, Anak Agung Gde Ngurah Karangasem in 1894. The war began in 1891 when the native Sasak troops rebelled after the ambitious Ngurah ordered them to attack Klungkung as the first step in his plan to conquer Bali as well. The opportunistic Dutch intervened to ‘save the Sasak’ when they were at the verge of defeat. It all ended with thousands dead including the king, a Dutch general, and the first Puputan, Balinese mass ritual suicide. The famous one in Bali in 1906 was not the first one. In 1989 the new Queen of Holland, Beatrix, returned the hoard to Indonesia. It is now in Jakarta’s National Museum. The piece described by Helen Ibbitson Jessup as a necklace for a high priest appeared in Court Arts of Indonesia, the catalogue for the Year of Indonesia exhibition.

This necklace, too, comes with an intriguing historical story. For many years it was the property of Wendy Becker, the American wife of Abel Sorensen, a Danish architect and designer who first achieved fame for his furniture, which is in the collections in numerous museums including MoMA. Abel and Wendy would land in Indonesia in the early 1950s and became very close to President Sukarno who was an engineer and aspiring architect as well. Sukarno gave the task of designing and building Asia’s first modern 5-star hotel, Hotel Indonesia, which has been a source of national pride and identity since it opened in 1962. Wendy, who was especially close to Sukarno, was described by some as one of his chief sources of information on the international community at the time. During their stay in Indonesia the Sorensen’s would often travel to Bali. In Jakarta they would meet with the Ide Anak Agung Gde Agung, the rajah of Gianyar. Gde Agung invited them to visit his palace in Gianyar. They did so in 1956 and Abel purchased the necklace for his wife who was utterly in love with it and would wear it only for official occasions.

Gde Agung, who was briefly the president of Eastern Indonesia, a puppet state set up by the Dutch with its capital in Makassar to offset the Indonesian Republic would go on to play an illustrious role in the early Republic of Indonesia as well as thinker and international diplomat. A conservative, he was a favourite of western governments wary of Sukarno’s cosy relationships with the Soviet Union, Communist China and the Indonesian Communist Party. Sukarno would later accuse Gde Agung of plotting against him and had him thrown in jail. It was a bizarre story based on the rumour that Gde Agung had invited sympathisers to his father’s massive cremation. Sukarno was suspicious and snubbed because he was not invited. Released by the New Order government, Gde Agung would continue to serve his country until his death. It is unknown if the necklace was used by the royal family, however the fact he sold it suggests that it was not an heirloom.

Indeed it is probably that the piece dates back several centuries and was made in Kamasan, outside Klungkung. Kamasan, now most famous for its classical painting style, was also a village of goldsmiths who served the needs of the royal families throughout Bali. Its history dates back to the Gelgel Dynasty, which ruled East Java, Bali, Lombok and Sumbawa after the decline of the Majapahit Empire in East Java, which came to an end sometime around 1500. Like their Majapahit forefathers, the Gelgel royal family was fabulously wealthy and loved gold jewellery. A small fortune in gold objects was also taken from them in 1908 in the final confrontation with the Dutch, which marked the end of Balinese independence. These pieces, too, are in the National Museum in Jakarta. They include golden flutes, jackets, kris handles and betel boxes encrusted with huge diamonds as large as pigeon eggs, as well as rubies and sapphires. There are also countless rings, bracelets and necklaces. Indeed the workmanship is so similar that it is hard not to believe they all come from the same source. Such objects belong to Bali’s “Golden Age” when it was politically, militarily and artistically at its height. They stand as a small reminder of the island’s glorious imperial past.