Most expats who have lived in Jakarta for any length of time will have a story about electricity problems. From sudden bill increases to blackouts, disconnections and unsafe installations, there is much to moan about – but we’re still better off than remote areas living in the dark.

So first, some backhanded praise. An Englishman based in West Jakarta gets his power from a cable strung across the street and every few months a truck with a dangerously high load goes past, ripping out the connection. When he reports the damage to state electricity company PLN, “the response is outstanding”. A repair crew arrives promptly and fixes the line in return for “cigarette money”. The Englishman’s only gripe is common power failures. And overloaded trucks.

Blackouts and bungled bills are not as frequent as they were in decades past, but there remains room for improvement. Bills can fluctuate wildly over a few months, even though a household’s power consumption remains fairly constant. This is because meter readers sometimes don’t bother to visit houses, but instead just estimate electricity usage. Often they estimate too low, so that when they do actually read the meter, there will be a substantial unpaid amount, which gets added to the next bill. This problem was supposed to have been remedied in 2004 by putting a barcode on meters, so that readers would have to scan the code before they could enter the amount of electricity used. But many households still receive uneven bills.

Consumers who fail to pay a bill for a month may have their power disconnected, while those who fail to pay for three months can have their meter removed. If you’re going away for more than three months and have an old meter, make sure someone will be collecting and paying the bills. Getting a meter reinstalled is no fun, unless you enjoy haggling.

In the bad old days, paying a bill meant going to the local PLN office and often waiting in a long queue. That has largely changed since prepaid meters were introduced in 2005. The number of prepaid subscribers is now about nine million and growing. New residential buildings must use the prepaid meters, which are manufactured by seven companies. Credit can be purchased at banks, minimarts, post offices and via ATMs, in amounts from Rp.20,000 to Rp.1 million.

The new meters allow customers to monitor daily consumption and display a warning light when credit is running low. When credit is exhausted the power is cut off. If you go on a long holiday, there’s no longer the risk of returning to find the meter has been removed. Customers can now also go to PLN’s website and enter their subscriber number to see their monthly bill.

Some consumers with old meters still have bad experiences, despite PLN espousing slogans of “no bribes” and “no gratuities”. One Chinese Indonesian man living in Menteng, Central Jakarta, called PLN when his power went off one night. Three technicians soon arrived in a car, spent a while examining the meter and cables, and announced they would need to fetch a replacement miniature circuit breaker. Upon their return, he says, they “discovered” the meter had been tampered with and threatened to report him to police for fraud, unless he paid them to repair the newly damaged meter.

Trying to resolve problematic bills requires considerable tenacity. One expat was informed by his employer that he would have to start covering half of his residential electricity bill because it had ballooned from Rp.2.5 million a month to Rp.5 million and then Rp.7 million. He stopped paying the bills and sought an explanation from his local PLN office. After a few visits, he was told there was no problem, so he should pay up or get disconnected. Unsatisfied, he went to head office, which admitted the meter reader had skipped a month that was now being added in arrears in instalments. That didn’t explain of all the increases, so they cut Rp.700,000 from his bill. The man suspected a problem with his 28-year-old meter and had it replaced but his bills still seemed too high. Finally, he bought a digital multi-meter, which indicated he was receiving less than the required voltage of (+/-5%) 220V. Some PLN technical staff visited and confirmed the supplied voltage was low. Then one day, 10 months after the initial complaint, his supply was upgraded. 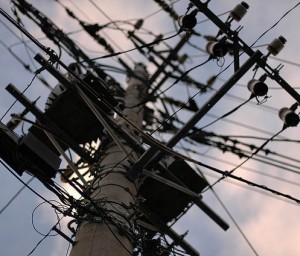 PLN tries to have a ‘progressive’ electricity pricing system, in which low-income consumers supposedly pay a cheaper tariff. Power capacity for households is installed at 450 volt-amperes for lightest users, then 900 VA, 1,300 VA and 2,200 VA for heaviest users. The higher the installed capacity, the higher the charge per kilowatt hour (kWh) consumed. For example, a household with 450 VA capacity that uses 100 kWh is charged Rp.40,620, while a household with 1,300 VA capacity is charged Rp.79,000 for the same usage.

This system encourages inefficient use of electricity among middle-class and affluent consumers. Once a household has a high installed capacity, say 1,300 VA, the charge doesn’t go down, even if electricity is conserved, so an air conditioner might as well be left on all day. In my apartment, I’m hit with a minimum monthly charge, no matter how little power I use, so there’s zero financial incentive to conserve power. Fittingly, the ‘Electricity Saving Tips’ section of PLN’s website is blank.

Critics say PLN could consider charging according to how much electricity is actually used. In other words, the first 50 kWh per month should be billed at a low tariff, the next 50 kWh at a higher tariff, and so on upward. This way there would be no faking who’s poor, except by bypassing the meter, which is another problem entirely.

Some thrifty householders have tried to reduce power bills by getting their installed capacity reduced, with the result that when they run a water heater simultaneously with an air conditioner, their capacity overloads and a circuit breaker switch is tripped.

As one of the largest producers of coal and liquefied natural gas – and with about 40% of the world’s exploitable potential geothermal energy – Indonesia should be able to provide a reliable and cheap supply of electricity. Unfortunately, the development of power plants is being hampered by land acquisition problems and other legal issues.

Demand for power is growing at about 10% annually – about 4,500 megawatts – while supply is growing at under 3% – about 1,600 MW, so rolling blackouts are inevitable. Indonesia was ranked 161st out of 183 countries in the ease of getting reliable electricity supply for business, in a 2011 World Bank report.

The situation is worse outside Java and Bali. Kalimantan and Sumatra are key suppliers of coal, yet their towns experience higher prices and more blackouts – up to 12 hours a day in some places. Many businesses have no choice but to buy diesel-powered generators. Thousands of rural villages do not have any power. Farmers at a village in West Lampung grew tired of waiting and built their own micro hydroelectric power station by damming a river and installing a turbine.

PLN is increasing electricity prices by 15% this year, except for households with installed capacity of 450 VA to 900 VA. There are concerns the increases will spark steeper inflation. The government says the move will cut spending on electricity subsidies from $9.6 billion to $7.8 billion, and the savings can be invested in energy supply networks. Money could also be saved by combating PLN’s “inefficiencies”, which cost $3.6 billion in 2011, according to a probe by the State Audit Agency.

Learn to be a Raw Vegan Food Chef in Ubud with Dr. Amy Rachelle