Papua’s abundant natural resources are a blessing and a curse. As the Indonesian military’s last remaining place to quash rebellion, there is unlikely to be any resolution of human rights abuses, no matter how many “autonomy measures” are introduced.

On a Friday night in Jakarta, I meet with a Papuan civil servant to ask him about development in his home province. He is initially positive, but after three beers he starts cursing Indonesia and says he wishes Western countries would support Papuan independence. It’s a sorry sight. An affable man, reduced to a drunken wreck, lamenting that his homeland will never be free.

In a perfect world, the Indonesian provinces of Papua and West Papua, and the neighbouring nation of Papua New Guinea would be a single country. European colonial history deemed otherwise, leading to a split down the middle of the world’s second-largest island. Many Indonesians know little about Papua and its history, least of all how it got its name.

The indigenous inhabitants, the Melanesians, are believed to have arrived about 50,000 years ago. Contact by Europeans commenced in 1526, when a Portuguese explorer, Jorge de Meneses, stopped in search of fresh water for his sailors. He named the island Ilhas dos Papuas (Land of the Frizzy-Haired People). For a long time, it was accepted that ‘Papua’ derived from ‘puah-puah’ – supposedly an old Malay word for ‘frizzy’ – although this word doesn’t appear in many dictionaries. More recently, some scholars have suggested the name Papua comes from a local term ‘sup i papwa’ (the land below), meaning either below the sunset or below (under) the power of the Sultanate of Tidore (part of the Maluku islands).

The name New Guinea was given to the island in 1545 by a Spanish explorer, Yñigo Ortiz de Retez, who thought the natives resembled people from the Guinea coast of western Africa.

The Dutch in 1660 acknowledged the Sultanate of Tidore’s sovereignty over New Guinea, which in 1667 came under Dutch control when the Dutch East India Company became the ‘protector’ of Tidore. In 1828, the Dutch made a settlement in western New Guinea and claimed sovereignty over the half of the island lying west of 141 degrees longitude. By 1884, the northeastern quarter of the island was a protectorate of Germany, while the southeastern quarter was claimed by Britain, which handed over control to Australia in 1902. Germany lost its colonies at the end of World War I in 1918 so Australia ended up controlling territories called Papua and New Guinea, while the Dutch retained West New Guinea.

After World War II, Australia began slowly decolonising Papua New Guinea, which became fully independent in 1975. The Dutch had no immediate plans to give independence to their side of the island. Indonesia also opposed independence, insisting the island should be part of the newly formed republic. After years of squabbling at the United Nations (UN) and some military conflict, Indonesia and the Netherlands signed a ceasefire in 1962, paving the way for Indonesia to take over the territory. This agreement was largely due to American pressure on the Netherlands, as the Soviet Union had been selling arms to Indonesia for an invasion of Papua, and the US wanted to counter this “communist threat”.

West New Guinea was handed over to Indonesian administration in 1963, on the condition that an independence referendum, involving all native men and women, be held within six years. The so-called ‘Act of Free Choice’ was held in 1969. Indonesia argued that Papuans were too primitive for democracy and instead selected 1,022 participants to form an assembly, which unanimously voted for incorporation into Indonesia. Some assembly members said they were threatened and bribed.

Indonesia renamed the territory West Irian because the term Papua had connotations of colonialism and slavery. It has often been claimed that Irian is an acronym for Ikut Republik Indonesia Anti-Nederland (Join the Republic of Indonesia Anti-Netherlands). Irian is actually a Biak word meaning ‘hot land’ or ‘rising spirit’. In 1973, the name was changed to Irian Jaya (Glorious Irian). The word Irian ended up being associated with Indonesian repression, so following the 1998 fall of long-serving president Suharto, the province was renamed Papua in 2000.

In 2001, the government granted limited autonomy to empower Papuans, resulting in some local officials becoming extremely rich. In 2003, the territory was divided into two provinces: Papua and West Papua. The House of Representatives in 2013 decided that parts of Papua province should become South Papua and Central Papua provinces, while part of West Papua would become Southwest Papua province. The proposal has been rejected by local politicians and human rights activists, who feel it will merely increase the number of outsiders coming to collect government pay cheques.

There are concerns that Papuans will end up a minority in their own land because of Indonesia’s policy of sending settlers from crowded islands, such as Java, to more remote parts of the country.

In 1971, Papuans made up 96 percent of the West Irian population. By 2000, the figure had fallen to 68 percent. Some academics now put the figure at nearer to 50 percent.

There has been low-level armed resistance to Indonesian rule since the 1960s, resulting in a heavy military presence. One senior newspaper editor in Jakarta describes Papua and West Papua as the last remaining playground of the Indonesian military, following the 1999 secession of East Timor and the 2004 tsunami that ended decades of rebellion in Aceh province. “Papua is the last place left where Indonesian soldiers can engage in combat to earn promotions. And they can make big money on the side through illegal logging,” he says.

Some Indonesians have a racist streak against Papuans. Perhaps not surprising in a country where advertisers constantly tell people that white skin is better than dark skin. Last week, I asked a group of Indonesian women – Javanese, Sumatran and Manadonese – what they thought about Papuans. “Stupid, lazy, drunk and black,” said one woman. “They are embarrassing,” said another, “because they live in jungles and wear koteka [penis gourds] and the women don’t wear bras. They didn’t have proper clothes or shops until Indonesia helped them but they always complain.” 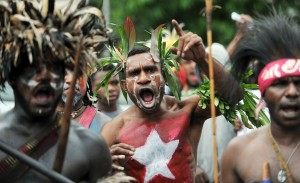 “They have very many gold and metal and forests; they should be rich but they are poor because they are lazy,” said a Javanese woman. She said human rights abuses are justifiable because soldiers are “only following orders” and “Papuans make trouble”. When I showed the women video footage of a dying Papuan with his stomach cut open, being taunted by a group of Indonesian soldiers, the women became silent and then changed the subject.

It is unfortunate for Papuans that Melanesians have a genetic susceptibility to alcoholism, much like Australian aborigines. An Australian who worked at the school run by Freeport Indonesia near its giant gold and copper mine in Papua recalls that when he tried to drink with locals, they could suddenly turn belligerent. He also claims that an empty shipping container was used by security forces to imprison Papuans, who could die in such confinement.

Freeport has long paid the Indonesian military to provide security. There have been allegations that troops masterminded riots at the mine in order to obtain more protection money. In 2002, gunmen killed two American teachers and one Indonesian teacher near the mine. The killings were blamed on an alleged separatist, Antonius Wamang, who said he received his ammunition from a high-ranking Indonesian soldier and saw masked troops shooting during the attack.

The Army’s elite Special Forces (Kopassus) in 2001 murdered Papuan leader Theys Eluay after he had attended a celebration at a Kopassus base. Then-Army chief Ryamizard Ryacudi praised the killers as heroes. Ryamizard is now defence minister, so President Joko Widodo – who has already allowed the police to undermine the Corruption Eradication Commission – may not be strong enough to deliver on promises for a more humane approach in Papua.

Independence is no guarantee of a better future. Papua New Guinea has been prone to corruption, ethnic conflicts and rebellions. An Australian environmentalist who worked last year in Papua, says independence would create many problems, though people would “prefer to be ripped off by their own”, rather than outsiders. He also says there may be less aggressive transformation of jungles into oil palm and sugar cane estates, and a greater chance of revenue trickling down to villagers – rather than profits ending up in Jakarta or offshore.

But for now, Papua is destined to remain part of Indonesia, and the government has its work cut out in winning the hearts and minds of the people.