With a marine area of 93,000 square kilometres interlacing throughout some 17,000 islands, a good navy force should be one of Indonesia’s top priorities. The strategic location sandwiched between two continents and two oceans means that Indonesia’s waters accommodate the traffic of numerous international submarines on any given day. Moreover, Indonesia’s waters are rich with biodiversity, oil and gas reserves, and spectacular dive sites – it is hard to imagine how other countries could not want a piece of the pie.

Therefore, Surabaya’s Submarine Monument becomes one of the must-visit spots in the City of Heroes. “Monkasel”, as locals affectionately call it, is actually the retired submarine KRI Pasopati, turned into a walk-in museum.

There I met Sugeng, who served aboard this submarine in 1978-1989 as a navy personnel, and since 1998 as a tour guide. Sugeng has many memories on this 1,300-ton Whiskey-class Soviet submarine. As a young sailor, Sugeng used to go on three-month missions at a time. There’s a glimmer in his eyes as he showed visitors around. 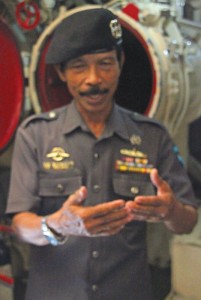 “This submarine wasn’t air-conditioned, so it got hot in here when the submarine went underwater,” he recalled. “We would go without a shower for literally months because this submarine only carries 11 tons of fresh water.”

But even so, the 1959 Vladivostok-made Pasopati was advanced technology back then. Its features include propellers of torpedoes longer than an adult human, sophisticated controls and monitors that look almost like a scene from a steampunk film, powerful diesel engine chambers, nifty espionage equipment, super-efficient bunk beds, and a chemical carbon dioxide remover for recycling oxygen.

Sugeng’s favourite memory includes the 1979 Operasi Halilintar, which sent the KRI Pasopati to the South China Sea to prevent the smuggling of Indonesian resources to Malaysia and Singapore, and helped relocate Vietnamese refugees to the Pulau Galang Refugee Camp in the Riau isles.

The KRI Pasopati was then led by Captain Soentoro and Commodore Mardiono. Soentoro is famed for intimidating the military forces of Indonesia’s neighbours, including during the 1974 Indonesian-Malaysian collaborative security operations in the Malacca Strait. When Soentoro brought up the prospective role of the Pasopati in the operation, Malaysian Navy Colonel Sidiq scoffed at the idea, perhaps to conceal his fear of Indonesian submarines penetrating Malaysian territory.

Soentoro took offense at Sidiq’s comments, but Mardiono calmed him down for the sake of good relations between the neighbouring countries. Nevertheless, Soentoro was determined to teach Malaysia a lesson. He then scared the Malaysian Navy by having the submarine travel under the radar and show up unannounced before the Malaysian convoys in Penang and Sabang.

“Back in Sukarno’s reign, Indonesia had twelve submarines like this. Our navy was a mighty force at sea, and other ASEAN countries feared us,” said Sugeng. The submarines, known as the Hiu Kencana (“Golden Sharks”) were named after Javanese mythical armoury: Nagabanda, Trisula, Nagarangsang, Candrasa, Wijayadanu, Hendrajala, Bramasta, Cundamani, and Alugoro. Pasopati is the magical archery of the Mahabharatan hero, Arjuna.

“Now Indonesia has only two submarines. What a pity,” said Sugeng. “Out of the retired submarines, only Pasopati is salvageable. The rest have become old scrap metal.”

The remaining submarines are the 1981 West German made Cakra and Nanggala, which Sugeng fetched in Kiel while undergoing a six-month military training, followed by a 58-day homebound underwater journey. Even if Cakra and Nanggala are technologically ahead of Pasopati, they have been in service for 32 years.

Asked if two submarines are enough to patrol Indonesia’s vast seas, Sugeng tittered sorrily and said, “Well, the men up there call the shots. I’m just a sailor, and a retired one for that matter.”

Military analyst Connie Bakrie says that building a good navy is an expression of a nation’s love for its homeland. The navy has everything to do with a country’s sovereignty and security.

“But this song underestimates the importance of the Indonesian navy defence,” she said, adding that Indonesia is blessed with the three things nations go to war for: religion, resources, and trade.

Connie said that she was angry to hear President Yudhoyono say that Indonesia has “One million friends and zero enemies”, in his inauguration speech in October 2009. “Hundreds of foreign submarines are sunk in our waters. And the waters of the Tanimbar Islands become the route of international submarines travelling between Indonesia and Australia. The journey between Tanimbar and Darwin takes approximately eight hours. The waters have permanent natural gas reserves claimed by China and Japan, and US Marines are deployed there,” said Connie. “How could one say that Indonesia has no enemies?”

Connie said that the government seems to have no problem splurging on politics, but fails to adequately equip a professional navy that effectively defends the country, deeming it “too expensive.” Indonesian military personnel only have two bullets in border military trainings. Indonesian Navy has no patrol ships in neighbouring waters, whereas Chinese and African trawlers, backed by private military companies, are making lucrative profits on fish stolen from Indonesian waters.

And Indonesia only has two outdated submarines. Whether in the future, Indonesian Navy will re-attain its past grandeur, equipped with an adequate number of high-tech submarines and earning the respect of countries that envy Indonesia’s wealthy seas, remains a question mark. Some say the chances are rather bleak, and understandably so.

But in the time being, the Submarine Monument stands steadfast by the romantic banks of Surabaya’s Kalimas River, offering visitors a walk through the Indonesian Navy’s glorious past and former sailors who would gladly tell of their good-ole’-day adventures patrolling the bottom of Indonesian seas. Whether you’re a patriot concerned with the future of Indonesia’s thalassic sovereignty, or a tourist looking to amuse yourself with the sights and sounds of vintage military technology, a visit to Monkasel would make an experience to remember.