“And you have to go see the Lumpur Lapindo!” is what my colleague told me when I asked him what I should do on my visit to East Java.

Amongst the many disasters that surround us every day there is the added disaster and insult of the rubber-necking, the tendency of humans to flock to a tragedy simply to let their jaws hang open and stare. Very often, the gorier the better. In some cases, the tragedy isn’t such that can be cleaned up overnight. It might be such that it remains for a month, a year, or say seven years, in this case. And when such a long-term tragedy lingers ever longer, the human desire to gawk spawns this thing which can accurately be described as twisted tourism.

In May of 2006, Lapindo Brantas company, when drilling a natural gas well, was met with quite a surprise; a mud volcano, a geyser of steam and hot mud shooting 200 metres into the air. As I’ve heard from reliable sources, the company’s immediate reaction was of course to attempt to hide it. They built some temporary walls and little levies as fast as they could, but the mud kept flowing, and flowing, and flowing, and flowing. When you go there someday it’ll still be flowing. Experts predict it’ll be flowing for 30 years. So far it has consumed 16 desa (villages) and three kecamatan (districts), displacing thousands of families and businesses.

Knowing all this information didn’t prepare me for what I encountered when I finally got there. The main road that runs directly south out of Surabaya, RT. 1, or RT. 23, or Jl. Gempol Malang, passes right along the western edge of the massive Lapindo mud plain. When you arrive there you’re first struck with the sight of this colossal gabion wall 10 metres high, towering over you, built to hold back the mud. It stretches as far as the eye can see in either direction. 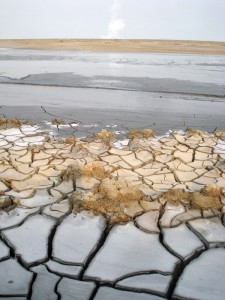 Along this gigantic gabion wall some people have built stairs to the top and charge people for their use. Admission to the mud comes at a price. This is where there are banners advertising access to view the mud as well as words of protest against the government and the Lapindo Brantas company. It cost us Rp.50,000 for three people, plus a cigarette. It took the guard a second to make the calculation, but I’m sure his formula changes according to the direction of the wind and perhaps the shade of one’s skin.

At the top of the wall, I was immediately greeted by ojek, one after another, who offered to take me out, around and right up close to where the steam geyser is still spewing into the air. Some were selling DVDs of the mud volcano. I was tempted by the DVD, but not the ojek. I never feel comfortable on a motorbike taxi and I certainly didn’t feel comfortable with the idea of riding on the back of a beat-up, old bebek across an active hot bubbling mud flow.

Along the top of the gabion were the common Indonesian refreshments for tourists: Aqua of all sizes, teh botol, peanuts, nasi bungkus, etc. And there were other foreign tourists there, too. I’m sure they had good reason to be there, (geology PhD students or something) unlike me.

Also at the top of the giant gabion there is a “monument”, a tombstone actually, as a reminder and promise never to forget the false promises made to pay restitution to the thousands of families displaced. A stone’s throw away from the monument there is an effigy of Aburizal Bakrie appropriately dressed in his bright yellow Golkar jacket, glowing with presidential aspirations. It was obvious that he had been mercilessly dilempar lumpur; spotted with mud balls and his glasses had been knocked awry. Maybe it happens on a regular basis, when the moon is full and mud is just right. I’m glad I got to see him there, standing in his mud. Made the trip all the more worthwhile.

Surabaya: A Journey Through Time