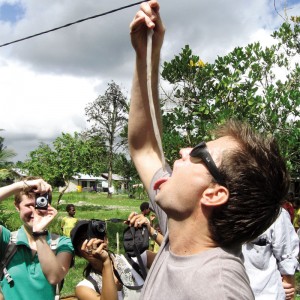 Eating a tambelo is a lot like swallowing 30 centimetres of your own mucus. Foodies brave enough to take the tambelo challenge step up to a split log, pluck an arm-length oyster from a waterlogged stump and dangle it above their lips, lean their head back slightly before opening their throat, relax their jaw and swallow it all down. For exotic food enthusiasts, tambelo, the elongated oysters plucked straight from the mangrove swamps of Papua, sits atop the top extreme foods of the world Bucket List.

One of Indonesia’s most underrated culinary delights, tambelo ranks right up there with durian, jengkol and pete on the spectrum of love-‘em-or-hate-‘em culinary delights. In a country where there is no shortage of culinary adventures – cobra meat burgers in Jogjakarta, grilled bats in Manado and snake’s blood energy drinks on Jalan Mangga Besar in the heart of Jakarta—tambelo stands alone, simply for the fact that you have to travel to the jungles of Papua to get your hands on it.

With an empty stomach and an open mind, Indonesia is nothing short of an epicurean’s dream. And real foodies climb the Mt. Everest of culinary adventures with the Kamoro tribe, who live along the southwest coast of West Papua. The Kamoro, one of 157 tribes in Papua, are famous for their consumption of courageous dishes. The bravest of all being live sago grubs, the stubby squirmy beetle larvae, and tambelo.

There are 18,000 people in the Kamoro tribe. Most of them live in 40 villages on Papua’s southern coast. About 15 percent reside near Timika, the town closest to Grasberg, for easy access to roads. The rest rely on the river for transportation.

Kal Muller, who has spent the last 20 years in Papua and is the world’s foremost authority on the Kamoro, is quick to point out the complexities of the tambelo. “Remember that the tambelo is a bivalve mollusc and not a worm, appearances notwithstanding,” says Muller, who has put down something like 1,000 tambelo over the years. “The beast is related to ships’ worms that are not worms either. Tambelo tastes like raw, sweet oysters. For the Kamoro it is a general tonic with curing powers. It also enhances sex. Eat your first one and if you don’t gag you will want more. Appearances are deceiving.”

Tambelo is not found nearby, but we have to bring in the sections of fallen mangrove trees containing the beasts from the South, nearer the coast, from the mangrove country, about another half hour drive.

Sinta Sirait, who has travelled extensively throughout Papua for the last 20 years, explains that tambelo is not so much about the taste as it is the texture. “Tambelo tastes similar to oyster but with much more slimy texture,” she says. “I can’t say it is one if my favourite foods, but it is very refreshing!” 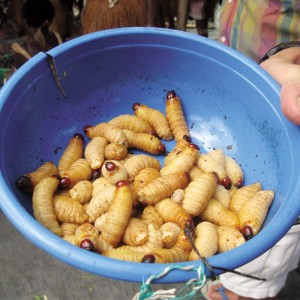 Actually, Sinta prefers the sago grubs to the tambelo. “On the other hand the sago grubs taste very smooth with crunchy outer textures, somewhat like marshmallows with lots of protein instead of sugar!”

Papua doesn’t back down when it comes to exotic battles of the stomach. Sago grubs, the wiggly larvae, some describe as creamy and having a meaty, almost bacon-like taste. Among the Kamoro, tambelo are a delicacy. Children hover around the open log waiting for their chance to grab at one of the shipworms, like kids scampering after candy at a parade.

“I was shocked to see the number of tambelo living in the log they just split open,” says Daniel Bellefleur, a Jakarta-based consultant who has made the trek to Timika and slurped down a few of Papua’s infamous bivalve molluscs. I was even more surprised that I was going to eat such a creature, but after they put a bit of Tabasco and lime on the worm-like creature, I slurped it right down. Delicious! Like an oyster from the jungle!”

Would he eat them again?

“If they had them at happy hour today, I would eat them as long as there was Tabasco and lime. They were really just like spicy oysters.”