Take a day trip to Pramuka Island to learn about endangered turtles and explore their territory.

With about fifty passengers aboard, the outfitted Zenvolution left Marina Ancol a half an hour late and skipped across a flat, golden mirror of water. My husband and I felt the promise of a day of relaxation. Our eyes focused on the misty horizon, but our minds considered what swam in the sea. We thought about turtles – more directly, Hawksbill sea turtles – and imagined their burnished shells gliding amongst the coral reef, sharp beaks snapping at sponges.

An hour later, we strolled along Pramuka’s harbour. Pramuka is part of a 110-island chain. Though it is several hundred land masses short of its name, Thousand Islands, or Kepulauan Seribu, stretches 45 kilometres into the Java Sea. Pramuka Island is among three dozen islands in use, and one of a dozen which is inhabited. About 200 families call it home. The Thousand Islands administrative offices are located here, as well as the centre for Thousand Islands Marine National Park.

The information map showed the park’s office location. The turtle conservancy was next door. We headed to the opposite side of the island, skirting the football field and waving hello to scouts in tan uniforms as we went.

The hawksbill sea turtle is known as penyu sisik locally, and by scientists as Eretmochelys imbricate. Like other marine turtles, its body is housed in a carapace, or protective shell, and flipper arms propel it through the water. The hawksbill’s namesake and distinctive characteristic is its sharp, downward, curving beak which it uses to tear sponges from coral reefs. The mature turtle grows to a metre long and weighs about 80 kilograms, and though omnivorous, it eats about 450 kilograms of sea sponges a year. Such a ferocious appetite keeps the reef in balance. 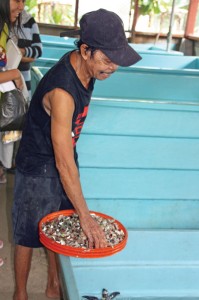 Unfortunately, the worldwide population of hawksbill turtles has been out of balance for decades. It is endangered due to overfishing as the striking shell is prized for decorative purposes. The carapace is comprised of irregular beige and brown streaks on serrated plates and changes colour slightly with water temperature. Although, the hawksbill spends time in the open ocean, it prefers lagoons and coral reefs where it is susceptible to capture.

In 1973, Pak Salim was encouraged to change the odds for the hawksbill. Foreign visitors to the area educated him and offered training and sponsorship for his initial conservation program. While the territory for the hawksbill ranges from the east coast of Africa to the southern coast of Asia and to India, it remains within tropical and sub-tropical waters in the Pacific Ocean, extending from Korea to New Zealand. The Indonesian islands are within the turtle’s territory, providing ideal circumstances for aid and nurture. Still, it was Pak Salim’s love of animals that drew him to care for the hawksbills.

When we arrived at the conservatory, the energetic, unassuming, swift-moving man dressed in a t-shirt, shorts and cap quietly stalked the conservatory doing chores. But he spoke no English. By happy coincidence, another family ventured in to see the turtles before a dive trip. Their college-age daughter, Ima, translated a conversation for us with Pak Salim. He said it took twenty years before the government recognized his actions to save the turtles, while he continued to nurture eggs and yearlings until the turtles could be released into the sea. In 2012, he released 1,500 hawksbills, but in years past, the numbers have totalled 3,000 or more. He has always worked without a salary, relying on help in all forms. Since the conservancy’s inclusion in the Marine National Park, Pak Salim has received many awards and a major Japanese sponsorship. The humble surroundings don’t indicate any waste of funds. There is no entrance fee and donations are welcomed.

The conservatory consists of 12 or so ponds. Six are hatchling ponds for one and two-year-olds with another six separate ponds for larger animals that vary from three to five years of age. These more mature hawksbills assist research efforts. Pak Salim says the water in each pond must be changed three times a day after feeding the turtles, but it is hard to get clean water. A mounted storage tank with a hawksbill painted on the side attests to his efforts. 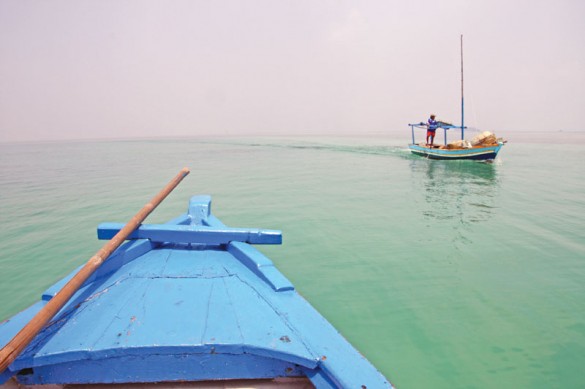 My husband asked about feeding times, and Pak Salim turned away without a word. He reappeared with frozen chopped fish which he plunged into the water to thaw. Like any youngster waiting on a meal, the hawksbill scamps went mad for the fish, crawling over one another to reach the edge where Pak Salim stood and smiled. Yearlings snapped at the fish and pushed with a flip to tear off a mouthful. Pak Salim tossed chunks into the pond and talked to his turtle friends. I remembered a sign outside which said, “If you talk to an animal, they will talk to you, and you will know each other. But if you do not talk to them, you will not know them, and what you do not know, you will fear.”

There is no beach at Pramuka Island, so beyond visiting the turtles, people generally join dive trips or hire local boats to ferry them to snorkelling spots like we did. Our blue boat coughed a cloud of black diesel smoke and chugged to a reef where Captain Baron threw bread into the sea, creating a fish frenzy around us on the reef. Afterward, we picnicked on the sand at Semak Daun. Back on Pramuka, we bought ice cream and waited an extra thirty minutes for our boat to take us back to Jakarta. The pace seemed exactly right for a relaxed Saturday exploring the undersea world of the hawksbill turtle.

Reserve discounted boat tickets online at [email protected] or buy them at the window at Marina Ancol, Dermaga 6, for Rp.275,000 round trip. Boats leave Jakarta at 6.30am and 10.30am and return from Pramuka at 230pm.