The spellbound audience is the best show of all. A wayang show is like eavesdropping on neighbours, or more accurately, friends and relatives. I’ve seen thousands of Javanese sit up all night in an overflowing theatre reeking of clove cigarettes, with babies fall asleep on mothers’ laps, people tip off chairs in hysterical laughter, children alternately sleep and come awake, giggling in front of or behind the screen until dawn. The audience already knows all the stories and roles by heart. Though they’re constantly moving around eating, sleeping and talking, they never lose the thread.

You probably won’t be able to follow all the wayang stories, but you can’t help but be infected by the supernatural atmosphere. The messages conveyed in the 3,000-year-old works of myth still apply to this day. It’s living and dynamic – more of an electric and kinetic exchange than film can ever be. The audience loses all sense of time as the gods themselves – not merely their shadows – are felt to appear on the screen.

A Javanese word meaning literally ‘shadow’ or ‘ghost’, wayang is a theatrical performance of living actors, three-dimensional puppets or shadow images projected before a backlit screen. The word can also refer to the puppets themselves. In most forms, the dialogue is in Javanese or Sundanese; sometimes Indonesian is used. Most often the chants are in Kawi (Old Javanese), as archaic a language on Java today as Shakespearean English is in Great Britain. 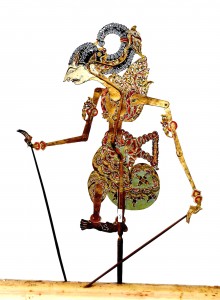 All wayang drama forms reflect Javanese culture. Characters are judged not by their actions but by their devotion to what is appropriate to their castes and by their predetermined roles in the drama. Gestures are given more weight than common sense, style more than content. Courage, loyalty, and refinement always win out in the end. Fate is accepted without question. But the wayang plays do not just show the direct victory of good over evil. They also display weakness as well as greatness in all the characters and, by implication, in society as a whole.

Today there are at least 10,000 individual performers of the wayang kulit shadow play on Java and Bali. In addition, there are wayang orang dance plays and wayang topeng masked dances. The Sundanese prefer wayang golek, carved wooden puppets, to the flat leather figures of the wayang kulit. It’s believed wayang golek is the last development of all the native wayang forms. In addition, there are a few rare, vestigial and refurbished forms: wayang beber, a narrated presentation in which drawings are unrolled and new forms such as Jakarta’s garapan sedalu ‘all night’ style pioneered by dalang (puppeteer) virtuoso Purbo Asmoro, and Bali’s wayang tantri which features Indonesian fables presented by Wija. On Madura, one troupe of wayang orang wears masks covering only the top part of their faces, exposing their mouths to speak freely. The Chinese of Java have their own form of wayang golek, performed only in temples.

Besides the abbreviated tourist performances held in Jogjakarta and Solo, wayang is staged whenever an important transitional event occurs in a person’s life: birthdays, weddings, important religious occasions, or as ritual entertainment during family feasts or selamatan. Coming of age (puberty), circumcision, a promotion, even the building of a new swimming pool – all could be grounds for putting on a show. While providing entertainment, wayang also teaches the meaning, purpose, contradictions, and anomalies of modern life. The policies of the government are even explained in terms of wayang theatre, not only by the puppet masters, but in newspaper editorials and even in government statements. For example, the character of Krishna, the most widely venerated Hindu deity, has sometimes been compared with that of Indonesian presidents.

Wayang dates from before the 9th century BC, preceding Indian influence. In ancient, pre-Hindu times, wayang puppets were perhaps corporeal manifestations of deceased ancestors who came down to Earth during the performance to visit and communicate with their descendants.

Wayang’s function was to placate and please the gods so as to increase fertility and exorcise or propitiate ghosts and evil spirits.

Since the moving, flickering silhouettes were considered the very souls of the dead, the dalang was originally a shamanistic priest, a medium between the dead and the living.

With the arrival of Hinduism from India sometime after the 1st century AD, the dramatic Ramayana and Mahabharata epics were incorporated into existing wayang dramas, to this day by far the most popular form of wayang. During the time of intense Hindu influence (8th-15th C.), Hindu teachers used wayang as a vehicle to propagandize and popularize their religion. Indian heroes, gods, demons and giants eventually began to supplant the ancestor figures. Indonesian backgrounds were supplied for the Indian epics.

Themes are usually variations on the struggle between gods and demons, with people choosing sides, sharing glory with the gods, helping the gods ward off demon attacks or being ultimately destroyed by them. The original epics brought from India were translated into Kawi over 1,000 years ago, but were only adapted for Javanese theatre in the 19th century. For many Indonesians, these classic stories, and not the Quran, are the true holy books. In fact, wayang mythology has been called ‘the Bible of Java’ because it alludes to a time when the gods were still on Earth; a time when they established the great universal rules and traditions of life.

Wayang shows have also had a strong influence on Hindu-Javanese sculpture. On 13th-century bas-reliefs at Panataran temple, you can see figures similar to wayang puppets of the time, portraying all the same characters and events found in wayang today.

When Hinduism started to give way to Islam in the 13th century, Javanese Muslims simply turned Islamic literary personalities into puppet characters. Shadow plays were used by sultans to flatter themselves and their retinues, to glorify and perpetuate the feudalistic court rituals of Javanese royalty. Wayang, by reinforcing the class system, kept the masses in their place.

Because Muslims banned the reproduction of the human form, both good and evil puppets were made ugly and grotesque so they wouldn’t resemble living beings. The faces, colouring, hairstyles, clothes and jewellery of the puppets are still so strongly stylized that they are more symbols than actual human figures. Wayang puppets remain the only surviving figural representations from the graphic arts of the early Islamic period.

Swapping shirts with Plato: Kicking the Atlantis Football Around

Preserving the Balinese Language for Generations to Come