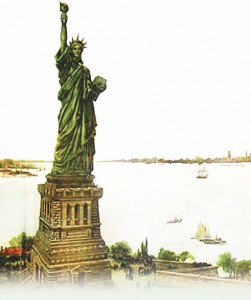 The English, bless our little cotton buds, have always loved a gallant loser. Years of feeble cricket and football performances have assured us that we may not be, at the moment, the world power we assume we once were. But this is no recent phenomenon. Oh no, we’ve long been able to lose in the most heroic, and often futile, manner possible.

Let’s look at the spice race. That indiscriminate race between the Portuguese, the Dutch and the English to dominate the supplies of clove, nutmeg and mace from the fragrant isles of the Moluccas to Europe. Where bemused islanders stared on in amazement at those hardy old sea dogs who travelled halfway around the world just to drink themselves into a stupor and fight with each other.

The Moluccas are a chain of islands in the extreme East of Indonesia bordering the massive Isle of New Guinea and while they may be mere pinpricks on most maps today, in the 16th and 17th Centuries their produce sure packed a hefty profit. After the Portuguese were the first to diddle around a while, the aggressive Dutch set up shop on Java and went sailing the eastern seas signing agreements with all the petty potentates who would listen and were soon able to gain a monopoly on the shipments back to the West and those good burghers of Amsterdam.

The English got involved hesitantly, testing the water in the manner they still adopt today. High-speed rail link to the Channel Tunnel? Of course, those early explorers who made it to the islands after journeys of several months across harsh oceans arrived to find the Dutch with their feet well entrenched, especially on the Banda Islands and, in a most un-European gesture, were most unwilling to share the spoils with the perfidious Albion.  The story was the same on Great Banda and Neira so the English, never ones to slink off with the tail between the legs, set off to Ai, a few miles distant and yet to have an agreement with the Dutch.

The Ai inhabitants welcomed the English, well that is how contemporary accounts describe it, and they set about fortifying the island in anticipation of a Dutch invasion which they were sure would come. Sure enough, the Dutch attacked, were pushed back once, attacked a second time and triumphed, locking up the English and ‘pissing and sh**ting on their heads’ leaving only a distant island named Run to be untouched by the ‘Hollanders.’

Some of the Ai survivors escaped to Run and it was here the English determined to do all in their power to keep a toehold on the Spice Islands. In 1616 they sent an expedition from Bantam to the island and the natives willingly agreed to make the island over to the English Crown forever. King James became ‘King of England, Scotland, France and Ireland is also now by the mercy of God King of Pooloway (Ai) and Pooloroone (Run).’ One of the English remarked that these islands would prove more profitable than Scotland ever had. The English in return were entreated to respect the local religion, not misbehave with the women and not breed pigs.

The man in charge rejoiced in the name of Nathaniel Courthope and, living up to his name, was an optimistic gentleman by all accounts. He knew he was vulnerable to attack but also knew the island was difficult to invade because of natural defences. Still, he prepared a couple of rudimentary forts and some defensive positions. The island was though defenceless to a naval blockade. It relied on the outside for all its supplies, including drinking water, and the Dutch, forced to agree to the legitimacy of English claims to the island were not so inclined to be neighbourly.

With little in the way of supplies reaching Run, some of the crew set off to try at least to get some water but the mission was doomed. The Dutch were alert to their plight on Run and waiting for such a moment. The vessel was caught and trashed, the men locked up.

With no help coming on their doorstep, Courthope sent one of his most trusted crew to Bantam seeking supplies from there but a change in leadership had seen a pompous preener take over with little interest in the outer isles. Finally, in the spring of 1618, three ships heavily laden with supplies were sent and within an hour of Run were getting ready to unload when a Dutch patrol came upon them. Courthope looked on in dismay as the wind changed and the Dutch got closer. The English were slow to move, so weighed down with supplies. The fight, with the inhabitants of Run looking on in a state of impotence, had only one outcome. The Dutch were overjoyed at their unforeseen bounty while Courthope, in that fine English tradition, sent off a strongly worded letter to his employer.

By 1619 he had resigned himself to the fact that help was unlikely in his plucky fight to keep one of the islands under the English flag. He had no money, no natural resources and little in the way of spices. His dwindling crew was steadfastly behind him which would have been comforting but on this tiny rock surrounded by enemies and seas, he must have felt that the world was a very big place indeed. 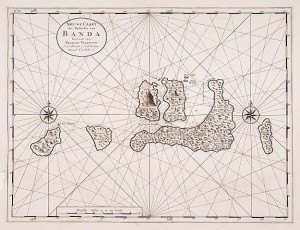 But in October 1620 news came through that over on Great Banda, there had been an uprising and the natives there wished to join with Courthope and the people on Run to take on the Dutch. The plucky Englishman determined to sail over to the island under the cover of darkness and meet with the rebels but was betrayed. Some Dutch were at sea that night, silently waiting for their hated foe who had kept the English flag high among a sea of orange. Courthope went down fighting but went down he did. The body wasn’t found but later the story emerged that the Dutch had buried the man who had held them at bay for 1,540 days with full honour and respect.

With Courthope out of the way, the Dutch returned and stayed until 1665 when a couple of English vessels fronted up at the harbour and reclaimed the nearly forgotten harbour. But at this time, the English were looking west as well as east and the year before had received from the Dutch an area called Manhattan through a mixture of bluff and bravado.

By 1667 the English and Dutch were tiring of fighting each other all over the known globe and decided to try and find a peaceful way out. The English though wanted Run officially handed back, the Dutch wanted Manhattan returned and on this point, they got stuck. Finally, though, they thought to sod it, let’s keep things as they are, no matter how possession had been claimed, so officially exchanged the island of Run in the East Indies for Manhattan, including New York, in the American colonies.

While Courthope’s spirited defence was, in the battle for the spice trade, ultimately irrelevant and soon forgotten, if history were a card game, he held onto the two of diamonds which was later traded for the ace of spades. Today, Courthope is all but forgotten, his heroic defence of a tiny island on the other side of the globe plucky but futile.  Which is a shame because his stubbornness in the face of overwhelming odds is quintessentially English. Perhaps if he had a Max Clifford or a Simon Cowell representing him, his name and deeds would indeed be known across the land, especially in New York.