Old Dhaka is a mish mash of narrow lanes, crumbling houses home to a myriad of artisans and a history that dates back more than 400 years. There are no accurate maps to the area, there are very few road signs and hardly anyone speaks English. But wandering these historic streets will bring you up close and personal to Bangladesh and Bangladeshis.

Bangladesh of course is a riverine land, so it is only right that a river should dominate its capital. The Buriganga is a commercial lifeline, a transportation hub and a floating market all mixed up in one fascinating aquatic package.

Dhaka’s old town extends about a mile inland from the teeming riverbanks and has changed little over the centuries from when Arakan pirates and European traders were attracted by the wealth of this eastern outpost of the Mughal Empire. Indeed, should those pirates and traders return today they would find little has changed along the riverbank. More people, yes, but many of the buildings and industries would still be recognizable.

Sadarghat is at the heart of the area. It is from here three-storied ferries make the overnight journeys south to towns and villages still without a direct road to their capital city. Among the colossus passenger ferries strive an incredible variety of smaller vessels catering to the needs of the local traders and commuters.

Flat bed ferries regularly cross the Buriganga, dwarfed by the much larger passenger ferries, transporting just a handful of people to the opposite bank, their boatmen straining every sinew, sweating under the harsh sun with sweat staining their turbans and sarongs.

Produce is forever being unloaded with porters carrying onions and potatoes, vitals in the local diet, on their heads up the gentle slope to the nearby market along Ahsanullah Road. The road, like all in this area is narrow and motorized vehicles cannot reach it. Instead, goods are loaded on to wooden carts which are then pulled by hand to their destinations across the city.

The Ahsan Manzil, or Pink Palace, is within easy reach of Sadarghat and overlooks the teeming waterway. Built by a wealthy Kashmiri businessman who made Dhaka his home, this impressive house with its dominating staircase now houses an interesting museum that details a Dhaka now long forgotten and its quiet gardens offer a much needed respite after the din of the streets. 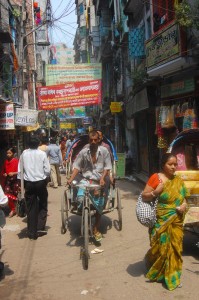 Dhaka’s cosmopolitan past lives in Shankharia Bazar or Hindu Street. Down here the narrow lanes get narrower and the decrepit buildings with their faded charm get higher. There is barely enough room for a single rickshaw to pass the labourers busy carting their wares.

Each narrow shopfront bursts with economic activity, be it conch shell bangle makers, Hindu artefacts or the impossibly small coffee shops with tiny stools that rise barely 12 inches off the ground. Some shops are brightly lit; others boast a few wall mounted candles recalling days gone by, though truth be told there is a practicality to the wax. Dhaka’s growing population places great demand on its infrastructure and power cuts are a regular occurrence.

Space is at a premium down Hindu Street, light also as the tall buildings ensure lengthy shadows for most of the day. The incessant tinkling of bells in this half light by impatient rickshaw riders is somewhat soothing and even hypnotic at times.

Some of the earliest colonial settlers in the East were the Armenians, and their legacy endures even to this day in downtown Dhaka with a district named Armanitola. Never particularly numerous even at their peak during the height of the British Raj today their tiny community boasts nine families who still regularly attend services at the Armenian Church on Armanitola Road, much as they have done since it opened in 1781.

The church is usually locked up, but there is a caretaker and the friendly locals will usually summon him if people want to have a look around. He will open up the church, which is a small narrow chapel with wooden seats and a high, arched ceiling.

Dhaka is all about people. Whether it’s the schoolchildren in caged rickshaws or women breaking bricks on the side of the street, bare foot urchins playing among the discarded rubble of a failed construction site or exhausted, sweat stained cart pullers enjoying rare down time nibbling on a biscuit, Dhaka’s Old Town gives you a snap shot of how life is for the vast majority of Bangladeshis in their capital city.

Logistics – the best way to see the Old Town is to go with a guide. Many people will not know the places you may want to visit even if they could understand English.

Getting around – the only way is by rickshaw. The lanes and alleyways are just too narrow for any kind of motorized transportation.

Getting to Bangladesh – regular flights to Dhaka from Singapore, Kuala Lumpur and Bangkok.

Visas – varies according to nationality. Best thing is to contact your nearest Bangladeshi embassy.

Places to stay – a good choice is Pacific Hotel in Motijheel, the main commercial district (www.pacifichoteldhaka.com) but the area is very quiet at night. Al-Razzaque International is more central to the Old Town and on a busy thoroughfare, North-South Road. But busy does mean busy! Sheraton and Pan Pacific Hotels can also be found a bit further north.

Places to eat – the Motijheel area is home to an increasing number of small deli type places that offer reasonably priced western food in clean environments. Helvettia is one example just next to the Pacific Hotel. The Al-Razzaque International has a large dining area downstairs which is popular with locals and tourists alike.

General info – the best resource for Bangladeshi info is a couple of brothers called Mahmud and Mahfuz. They can help organize hotels, airport pick-ups as well as guide people around Dhaka, and of course the Old Town. They have been mentioned in the last Lonely Planet guide to Bangladesh and are highly recommended.

Dua Tangan Cukup – Actions from across the archipelago