One of the biggest issues in modern Indonesia is the deterioration of coastal coral reefs, due to many factors like coastal erosion, illegal bombing or cyanide fishing, chemical pollution and so on. All these factors combined, especially in the last 20 years, have destroyed many coral reefs and coral areas around Indonesia and other Indo-Pacific Countries.

In many dive sites around the world, local villagers or conservation organizations have tried to develop coral restoration projects, using various techniques, normally with the creation of coral nurseries or underwater structures acting as fish refuge and substrate for the coral colonization. These projects are important for the future, but have a major issue: they are very slow and it’s difficult to see the results in a short time, since corals need years to grow.

Some years ago, two scientists (Prof. Wolf H. Hilbertz, who passed away in 2007, and Dr Thomas Goreau, President of the Coral Reef Alliance) discovered a technology called “Electrical Mineral Accretion”. Basically, a low voltage current in seawater causing dissolved minerals to crystallize and form structures similar to limestone, where coral larvae can settle and grow. Moreover, it seems that this low voltage can stimulate the carbonate deposition by the corals which increases their growth rate. 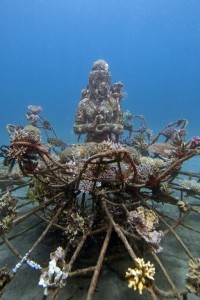 This technology has been further developed and adapted to coastal environments, where it’s possible to use photovoltaic generators, or devices using waves or wind generators to create a self-sustainable system using green energy to stimulate the coral recovery. This technology applied to coral reef is called “Biorock” and one of the most awesome examples of its success is easily observable under a few metres of water in front of the village of Pemuteran, North Bali.

The Biorock project in Pemuteran started in the year 2000 with the formation of the Karang Lestari Foundation and small investments from local dive operators and hotels, with the aim to rebuild the local coral reefs that had been heavily bombed and destroyed in previous years. In the following years, many workshops have been conducted by the scientists in Bali and even in other areas of Indonesia, with the purpose of creating a network of Biorock projects. Up to six Biorock projects are currently operational in Indonesia, with Pemuteran and Gili Trawangan (Lombok) being the biggest ones.

In Pemuteran, after only a few years since the first structure was installed, results are amazing. Corals grow fast and healthily, fish life is abundant, invertebrates like crabs, sea slugs and shrimps are abundant and occupying every shelter inside the Biorock. Some local dive guides and instructors are working hard to get new funds from tourists and creating new structures. It’s an artistic way of regenerating the corals in formations such as metallic crabs, nudibranchs, a Sea Goddess and even old bicycles. The Biorock Pemuteran project in 2012 has been awarded the Equator Prize by the United Nations Development Programme (UNDP) to be the world’s largest, longest running and best coral reef restoration project. The Karang Lestari Foundation expects to implement this technology in other areas of Bali like Lovina and Karangasem. 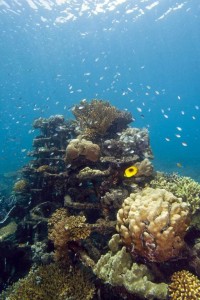 Komang Astika, diving instructor and native of Pemuteran, is one of the members of the Karang Lestari Foundation. “I started volunteering in 2000, when I was still very young because I believe that our whole community depends on the health of the coral reefs. Since 2007 I have become a full member of the Biorock Project”.

Tourists diving and snorkelling in Pemuteran can contribute with their donations. The money is used to create new metallic structures, and donors can have their name moulded into the metal. “During the high season, more than 50 tourists per day visit the Biorock, both diving or snorkelling”, said Komang, “and they can do more – with only 5 million Rupiah they can sponsor a whole structure, or with 350,000 Rupiah they can sponsor a baby coral that will be installed in one of the new structures.” Komang and the other members of the Biorock staff will make sure that the coral will grow and they will send each donor a certificate along with pictures of the coral and the structure every year following.

How to dive/snorkel in the Pemuteran Biorock area

Pemuteran is located in the Northeast of Bali in the Buleleng Regency. Surrounded by an amazing landscape, with the Tiga Saudara (three siblings) mountains at its back and the Java volcano’s alley in front, it is a relatively new touristic destination, but still far away from the hustle of the South, since it takes approximately four hours to get there from Denpasar.

The Biorock is located exactly in front of the Taman Sari Hotel and it’s freely accessible from the beach. Even if just snorkelling, it’s possible to appreciate the incredible coral life, however scuba diving is the best way to fully enjoy the experience. It’s a very easy dive, shore-entry, with a maximum depth of about 15 metres, open to divers of every level and experience. All the dive centres of the area can organize this dive – just make sure they support the Karang Lestari Project in some way.

If you want more information about the Biorock Project or be informed on their latest operations, visit the website biorockbali.webs.com or their office located exactly on the beach of Pemuteran, between the Pondok Sari Hotel and the Taman Sari Resort.