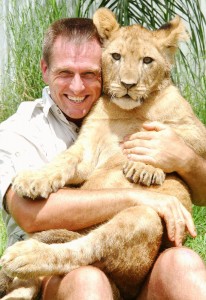 Working his way up through the ranks, Tim Husband has worked in zoos in Australia, New Zealand, India and throughout Southeast Asia for more than 30 years. Growing up in a very strict family in New Zealand where little love was shown, Tim found early on in life that being around animals helped him to find the missing bits in his life. As a child he often visited zoos, animal parks and pet shops to see what was there and to learn as much as he could about wildlife. In his early 20s, Tim left New Zealand to live in Australia. At Sydney University, he earned a degree in zoology. In the course of his career, he has helped with the hand-raising of a gorilla, and looked after Sumatran tigers, sun bears and chimps. Presently Tim works as Curator of Life and Science at Bali Safari and Marine Park, one of Asia’s top fauna parks.

What was your childhood like?
I was one of those kids who was always bringing home animals. Animals will love you back unconditionally as long as you treat them well and with the respect they deserve.

What was your first pet?
That’s easy. She was part Whippet and part Labrador and her name was Penny.

When was your first visit to Bali?
In 2009, I was working as a consultant in a New Zealand zoo where a keeper had been killed by a tiger. My job was to sort out all the problems and set up new standards so it wouldn’t happen again. That same year Hans Manansang, the GM of the Bali Safari and Marine Park, invited me to visit Bali to see if I was interested in joining his team. At first I wasn’t interested because zoos over here had such a bad reputation in animal welfare, but I was so impressed with how well the animals were being treated and with the park’s conservation work that I accepted the job.

What are the Bali Safari and Marine Park’s most endangered animals?
We have a number of animals that are endangered, from the Bali Mynah to the Sumatran elephant. I can say with confidence that just over 70% of the animals in our collection are endangered.

Are there specific problems related to maintaining your endangered species?
In Bali we have the potential of doing so much for endangered Indonesian wildlife, but the one big problem we face is that with the rabies ban on zoos and animal parks on the island, we are not able to import new genetics for use in the breeding of our carnivores and primates. This means that inbreeding will become a critical issue in the future because of the limited supply of unrelated animals in Bali. This is a situation that really needs to be looked at not only for exotic animals but also for domestic animals. If Bali had its own quarantine centre, then animals with fresh genetic blood for breeding could then be brought in and out of the island. Is the work of capturing, recapturing or restraining captive wild animals dangerous?
Oh yes! Always there’s a danger for the animal. It might get hurt or too stressed out. Secondly, there’s a danger that people could also get hurt. So it’s always important to do the job properly and quickly with safety foremost in mind for both the animal and staff. If we are moving a large crocodile, then we need to make sure we have the manpower first to jump on the reptile and hold it down. If it’s a big cat, then we will try to crate train it so it walks into its box by itself stress-free. Sometimes if that doesn’t work we will use drugs to sedate large dangerous animals like tigers and lions.

Do zoos and fauna parks follow a code of ethics in their treatment of animals?
Yes, there is an ethics code, but unfortunately many zoos and parks do not follow. There’s now a zoo accreditation system in Indonesia as there is in many other countries around the world. This is set up to help bring up the standard for zoos here to a higher level. It covers every part of the husbandry of the animals plus conservation, record keeping and putting in place a master plan. I was very proud when Bali Safari and Marine Park became one of only two parks in Indonesia that passed the strict assessment and achieved an A Class accreditation.

What are the most common misconceptions that the public has about zoos?
One is that animals at a zoo or park are pets and can be touched. Another is that all zoos are doing a great job saving wildlife.

Are there differences in the attitudes that Australians and Indonesians have towards animals?
It’s easy to say that Australians look after their animals better. But the truth is that in countries like Australia the extinction rate of their wildlife is a lot higher. I do feel, however, that here in Indonesia we can learn from the mistakes that other countries make by taking some very positive steps before it’s too late. But we need to move NOW and not sit around talking about it for a few more years. 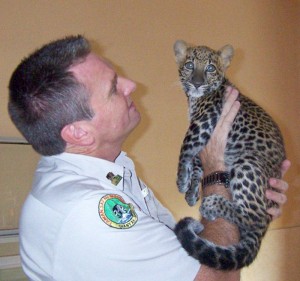 Of all the species of animals you have worked with, what have been your personal favourites?
I try not to have a favourite and try my best to give all species equal attention. I have seen other curators that have fallen into the trap of having a favourite species and the whole collection suffers because of it. It’s easy to find interesting things with every species if you look.

What is the most unusual animal behaviour you’ve ever encountered?
To be honest the most bizarre animal behaviour that I have seen is human behaviour. We have the power to do so much good, but we still don’t use that uncontested power wisely. All over the earth you see mankind pushing animals to the edge of extinction. We all share this home we call earth and yet we treat it like there is a spare one we can move to. There are many people out there who care for the animals around us, but sadly there are not many that are in a position to be able to change the laws to help.

The most bizarre animal behaviour that I have seen is human behaviour. We have the power to do so much good, but we still don’t use that uncontested power wisely.