Pull up a chair. In the 1950s, there was a groundbreaking British radio series called The Goon Show. It was anarchic, absurd and hilarious. The main character was a naive optimist named Neddie Seagoon, who was frequently swindled by villains showing him photos of money. It was gloriously silly.

Fast-forward to present-day Indonesia. And this is where the story really starts. Conmen are still able to deceive the unwary, simply by showing them an online photo of a pile of money.

Pull up a chair. On December 6, 2017, a woman named Putu in Palembang, South Sumatra province, was checking her Facebook page when she opened a message from a Caucasian man calling himself Stephen Weedon. They chatted for several days and developed a close online relationship. Stephen claimed to be a British Army officer who had amassed US$1 million while serving in Afghanistan for the past three years. He told Putu he was due to leave Afghanistan soon but could not take his cash home without getting into trouble, so he proposed sending it to her in Indonesia. He offered her half of the money if she would look after it for him until his arrival. To prove he had so much money, he sent her a photograph of cash.

If you would also like to be rich, just search Google Images for “bag of a million dollars” or something similar, then view the best image and save it. Simple. Or if that’s too difficult, here’s a picture for you: 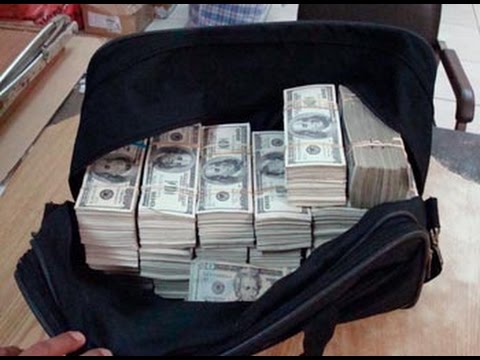 Part 2. And this is where the story really starts. Putu agreed to look after Stephen’s million dollars. Stephen told her the money had reached Indonesia’s Batam Island, where it was being held up by customs and excise officers at Hang Nadim Airport. He advised her to bribe the officers to secure the package’s release.

Right on cue, Putu received a phone call from a woman claiming to be a customs officer at Hang Nadim Airport. Putu was instructed to transfer Rp.10 million to a Bank Mandiri account for an administrative fee. Eager to receive the million dollars, she complied.

Over the following days, the customs woman continued to demand payments for various certificates necessary to release the package. Putu, encouraged by Stephen, made transfers of Rp.40 million, then Rp.80 million, followed by Rp.300 million. When her funds were almost depleted, she could only transfer a final Rp.10 million. In total, she had transferred Rp.440 million (US$31,000).

Pull up a chair. The million-dollar package never arrived. Stephen ceased contact. Putu realized she had been conned. South Sumatra Police investigated. In May 2018, they discovered Stephen was actually a 32-year-old Nigerian man, Anthony Chukwuebuka alias Ebuka, who lived in Sentra Timur apartment in East Jakarta with his Indonesian girlfriend, Neng ‘Diana’ Rahmawati (19). Ebuka had been in Indonesia for three years and his visa had expired.

A police team from South Sumatra monitored Ebuka and Neng for three days. And this is where the story really starts. Aware they were being observed, the pair fled to the West Java capital of Bandung. They booked into Gateway Apartment and were arrested there on the night of May 23. An accomplice, Nisa Rahmawati (18), was arrested at her apartment in North Jakarta. The three were flown to South Sumatra for trial. Police said Nisa had posed as the customs officer, while Neng had provided most of the bank accounts for the transfers.

Pull up a chair. Ebuka’s swindle was just another incarnation of the advance-fee scam, which has been around for over 200 years. It involves promising the victim part of an enormous sum of money, in return for a comparatively small up-front payment. The scam was first recorded in the aftermath of the French Revolution of 1789, when conmen sent out letters asking for money to secure the release of an aristocrat’s servant, who could then lead the way to a hidden fortune. One hundred years later, the scam reappeared in the Spanish-American War, with a soldier or nobleman imprisoned in Spain needing funds so he could escape and access his vast riches. In the 1980s, the scam became popular in Nigeria. It took off exponentially in the 1990s thanks to the advent of the internet and email.

In the past 15 years, the social media revolution has given new life to the scam. According to Nigerian scammers, Indonesia offers rich pickings because the people are gullible, banking security is weak, and it’s easy to anonymously obtain a mobile phone number and internet access.

In the first five months of 2018, Indonesian police arrested at least 20 Nigerians for conducting a range of scams. How do scammers enter the country so easily? Some claim they pay agents to bribe Immigration officers to ensure they are not turned back.

And this is where the story really starts. You’re busy wasting time on social media when you receive a Facebook message from a handsome American soldier. A veteran of the Afghanistan war, he wants to buy a retirement property in Indonesia. If you help him with the purchase, he will give you a commission of 10% or more. Easy money!

On May 8, police arrested two Nigerians, Atan ‘King’ Antoni and Aloysius, and their Indonesian accomplice Diah Savitri, for running the property purchase scam from Jakarta for about one year.

Antoni set up phony accounts on Facebook, posing as retired American servicemen. He fished for wealthy Indonesian women. If they were happy to chat via Facebook’s Messenger application, he would ask for their help in finding a retirement property in whichever part of Indonesia they lived. If a woman took the bait, she might find a suitable property that cost US$500,000. She would tell the foreign soldier it cost US$600,000, not including taxes and other fees. Antoni would then send her a photograph of US$800,000 in cash, saying he would have it couriered to her address, so she could make the purchase on his behalf and take a commission.

A few days later, the victim would be telephoned by Diah, posing as a cargo officer of a courier company. She would say the package of money had arrived, but before it could be cleared, the victim would have to pay a hefty airport tax. Next, she requested millions of rupiah for anti-terrorism and anti-corruption certificates. All of the funds were to be transferred to a local bank account controlled by Aloysius and Diah.

And this is where the story really starts. The trio scammed women from Batam to Belitung to Bali. They were flown to Batam for trial and face four years in jail if convicted of fraud.

Pull up a pew. Such scammers invariably invoke the name of God and emphasise they are religious, so they could not possibly be dishonest. They also urge their victims not to tell anyone about the promised money, as secrecy is the key to success.

Critical thinking and healthy scepticism are the best weapons against scammers. Blind faith and greed may lead only to misfortune. Have a picture of Queen Victoria.