Celebrities were among thousands of Indonesians tricked into investing in a fraudulent tissue business that offered unfeasibly large profits. The name of the tissue brand? God Is Great.

That’s what was promised by a man named Kamal Tarachand, whose company PT Bintara Eximindo started the God Is Great tissue business in November 2014. It looked like a classic Ponzi scheme, in which funds from new investors are used to pay dividends to earlier investors – although it seems no one received substantial dividends.

The scam was reminiscent of an old South Park episode in which so-called Underpants Gnomes (who steal underpants) outline their meaningless business model: Phase 1 – Collect underpants; Phase 2 – ?; Phase 3 – Profit. The gnomes never explain how their activity will generate profits. 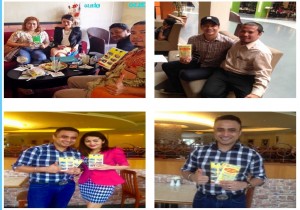 As a slogan on the God Is Great website says, “Who said becoming a billionaire requires hard work?” The website, which solicits new investments, was still accessible last week, whereas the Government is quick to block sites deemed harmful to the nation’s collective morality.

Police on June 3 arrested Kamal while he was dining at the Holiday Inn Jakarta Kemayoran in Sunter, North Jakarta. Two days later, police raided his office in nearby Kelapa Gading and seized nine boxes of evidence, mostly computers and tissues. Investigators said the scam had claimed at least 3,131 victims across several provinces over recent months.

Celebrities duped by the swindle said Kamalhad claimed to be an owner of the Bank of India and a nephew of Raam Punjabi – a famous film and soap opera producer of Indian descent. He also boasted that his business license was issued by Jakarta Governor Basuki ‘Ahok’ Purnama. He had shown a faked photo of himself posing with ‘Ahok’ – actually one of the scam’s victims, actor Rizal Jibran, with Ahok’s face superimposed.

The God Is Great concept was to feature paid advertisements on tissue packaging – thereby generating profits from both tissue sales and advertising. Investors were told they could also advertise their own businesses on the tissue packs.

Targets were invited to invest from Rp.1 million to Rp.513 million. This would be used to pay for tissues supposedly made in a factory in Pasuruan, East Java. The retail price for a pack of 50 tissues was put at Rp.1,000 to Rp.1,350.

Among the celebrities recruited to endorse and invest in the company were soap opera actresses Novita Sari (52) and Nana Khairina (34), and actor Rizal Jibran (37). Don’t worry if you’ve never heard of them.

They were offered differing payments and returns, all too good to be true. Novita said she mortgaged her house and invested Rp.471 million because she was promised a return of Rp.200 million per day for 5,000 days.

Rizal said Kamal had promised him Rp.22 billion to endorse the business for 1,000 days but had so far paid him only Rp.5 million. Nana said she was hired as a marketing spokeswoman for the business and had been promised tens of millions of Rupiah per month.

The company’s website features a photo of Nana captioned:

“Sexy actress Nana Khairina is waiting to invite you to becomea millionaire through tissues. How can that be?”

Readers can then click on a link to an article on rimanews.com, in which Nana claims that people investing Rp.1 million will receive Rp.50 million to Rp.100 billion. Rimanews.com is yet to take down the nonsense article. 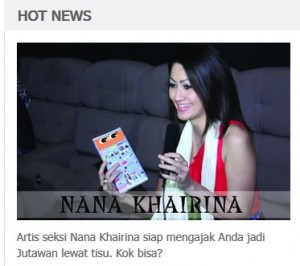 Another victim, Venus Jean, said he invested Rp.101 million and was promised a return of Rp.1 trillion over 5,000 days (13 years and 8 months). Instead, he had so far received Rp.10 million back on his investment.

Asked if the promised profits were too fantastic for a tissue business, the long-haired Venus said it had appeared possible on paper. He had been attracted by the concept of advertising on tissue packs, as it was “much cheaper than traditional ads on television and billboards”. But many ads were never printed, he said, because Kamal claimed that draft advertisements had to be submitted within 10 days.

Netizens showed scant sympathy for the celebrities, saying they deserved to be scammed for being greedy. “None of them used their brains – how could they expect Rp.1 million to pay a commission of Rp.200,000 per day for 1,000 days?” read one comment on detikcom online news portal.

The celebrities at least realised they had been conned. “Initially [Kamal] said it was not multi-level marketing,” said Rizal. “But later the model turned out to be like that, and all these actors were also lied to and realized it.”

Rizal said Kamal had repeatedly broken his promises and refused to discuss the matter with the investors, leaving them with no option but to report him to police.

Lawyers accused Kamal of fraud under Articles 372 and 378 of the Criminal Code. They also want him charged under the 2014 Law on Commerce and the 2010 Law on Money Laundering.

The tissue company’s website, which features stock photos of a smiling, suited Caucasian male offering a handshake, claims the business has “empowered 1 million Indonesians”. The site contains lengthy spiels boasting the company can rescue uneducated people, and even the physically disabled, from poverty and unemployment.

There are also links to newspaper articles praising the scheme. One even says the tissues will “help the world to go green because they are environmentally friendly” and “will help the Indonesian economy”. The truth is that Kamal’s scam will only help Indonesia if it teaches the media, politicians and schools to educate people to stop believing in fantastical get-rich-quick schemes.