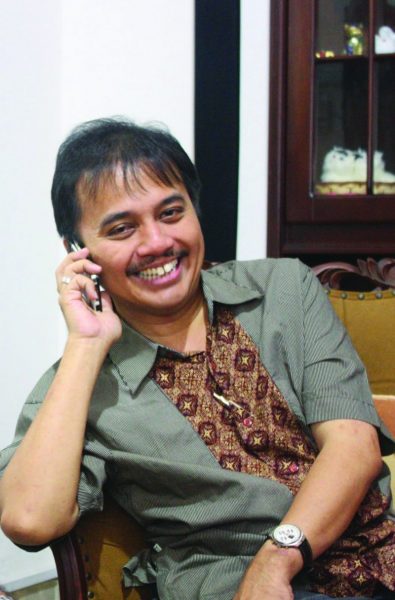 Ironically, Kanjeng Raden Mas Tumenggung (KRMT) Roy Suryo Notodipro – to give the minister his full name – is the country’s foremost self-proclaimed expert on cyber crime. The KRMT bit of his name is a Javanese aristocratic title for a noble lord regent.

Online shoppers have long been warned that if a price looks too good to be true, then it’s a scam. Many victims of these scams complain that police are reluctant to help them get their money back.

Not so for Roy. On August 20, he saw a Tera Blue brand fixed-gear ‘fixie’ bicycle, advertised on Indonesia’s biggest classifieds website, OLX.co.id, previously called tokobagus.com. The black, orange and pink fixie, made in Malaysia, usually retails for about RM990 ($300), yet on OLX it was being offered by a ‘vendor’ in the West Java town of Subang for Rp.890,000 ($73).

Roy contacted the vendor and they agreed to a price of Rp.1 million, including delivery to his house in Kebayoran Baru, South Jakarta. The minister immediately transferred the money via Bank Central Asia’s mobile banking facility and sent a screen-shot of the transaction.

Suddenly the vendor claimed the bike had been bought by another customer, but that new stock would arrive within two days. After two days, Roy agreed to buy a bike with different colours but the scammer continued stalling.

Repeatedly, Roy politely requested a refund. The scammer claimed the money could only be refunded by a boss. Eventually, the minister accused him of fraud and gave him a final chance to make the refund. The scammer responded by erasing Roy’s number from his BlackBerry smartphone.

After that, Roy contacted police, who used mobile tracking technology to locate the scammer. On September 2, police arrested the youthful perpetrator, Gemblo, at his parent’s house in Indramayu, West Java.

Roy said the scammer had many victims. Gemblo’s family members claimed the boy does not understand the Internet and was sacrificed to protect his friends.

When the story broke, chat forums were not sympathetic to the minister. Netizens complained that police rarely deal with e-commerce fraud cases involving only a few million Rupiah.

Roy’s self-styled expertise in technology crimes has not won him a lot of fans in cyberspace. He testified for the prosecution at the 2009 defamation trial of Prita Mulyasari, a housewife who was jailed for complaining about poor treatment she received at a hospital in Banten province.

When a topless photo alleged to be Miss Indonesia Artika Sari Devi was released in 2005, Roy claimed it was genuine. He changed his tune after the photo was revealed to be that of a Thai transvestite.

Roy has also been criticized for matters unrelated to cyber fraud, such as in March 2011, when he and his wife were ejected from a Lion Air flight after trying to take the seats of the actual ticket holders.

Presently, Roy is under fire from Indonesia Corruption Watch (ICW) over his official trip with his wife to Europe to promote the Indonesian martial art of pencak silat – as his term as minister nears an end. Previously a lawmaker with the Democratic Party, Roy became sports minister in January 2013 to replace Andi Mallarangeng, who resigned after being declared a corruption suspect.

ICW said the trip is a waste and questioned why Roy’s wife needed to be among the minister’s 10-strong entourage visiting the Czech Republic, Spain and Bulgaria.

Indonesia already has a law to protect citizens against online scammers. The problem is that it’s not always enforced. Take the case of Ilyas from Riau province. He transferred Rp.4 million for a new Sony Xperia Z2 phone, which retails for Rp.7.3 million. He received nothing and reported the case to police, only to be told they could not trace the scammer.

Erwan Saputra, the founder of an online verification site called polisionline.com, says such scamming is on the rise and includes luxury cars being offered for absurdly low prices. Yet the greatest scam being perpetrated in Indonesia may be the unwinding of hard-won democratic reforms.