As a traveller and a writer, I find the places I visit laced with stories of local heroes and their battles, whether real or mythical. In fact, Indonesia recently celebrated “Heroes Day” in honour of real people who fought battles related to the founding of the Indonesian nation.

Why are we so obsessed with heroes? I recently asked the question to a friend who makes animated films. “Think Neo and Peter Parker,” he said. “In the real world they’re average Joes with real flaws. But once their costumes are on and their superpowers are availed, you can’t see their faces. And you subconsciously fill in the blanks with your own identity – you imagine yourself as the world-saving superhero.”

So, on Heroes Day (November 10) I decided to visit the Hellofest Anima Expo and find out what heroes young Indonesians are currently creating, and what messages they might have for the real world. Naturally, one of the titles that first caught my attention was Battle of Surabaya, the 1945 incident which Heroes Day today commemorates. 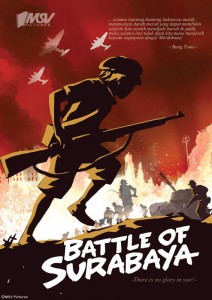 Written and executive produced by business consultant Prof. M. Suyanto, Battle of Surabaya is a full feature animation due for theatrical release in mid-2014. The film has been described to have a dramatic “Hollywood feel” and Japanese style anime look.

Though featuring real Indonesian heroes such as Sukarno, Hatta, and Sutomo, the animation is a fictionalised account told from the point of view of Musa, a fictional 13-year-old shoe-shiner who acts as a secret messenger for the Indonesian military.

“A hero is not necessarily someone who suddenly acquires a superpower,” said Roy, the mononymic technical director of the animation. “We’re portraying a boy who undergoes a process of becoming the hero. We chose a 13-year-old to become the hero because people tend to give 13-year-olds not much regard.”

Taking place three months after Sukarno and Hatta proclaimed the Republic’s independence, the Battle of Surabaya is Indonesia’s first major battle against foreign forces as a newly independent nation fighting to get international recognition.

“We want the present generation to remember that we owe the existence of this nation not only to big names like Sutomo, but also to a myriad of nameless heroes who may have had stories similar to Musa’s in real life,” said Roy. “We hope to honour those nameless heroes through this animation.”

Another 1940s nostalgia-themed animation featured at Hellofest was Anka Atmawijaya Adinegara’s Asia Raya. The award-winning 10-minute film is based on the life of soldier Shigeru “Rahmat” Ono, who left the Japanese army to help Indonesia fight for its independence by resisting the Dutch military aggression. Ono’s independent army was feared by the Dutch for its ruthlessness. But Asia Raya also portrays Ono as a compassionate man who rescued those wounded in the war.

“The ideology that inspired me to make this film is called Pan-Asianism, and it is very interesting,” said Anka. “It promotes the idea that Asians can advance independently without having to be imperialised by the West.”

The first minutes of Asia Raya portrays the Jayabaya prophecy, where Japan would defeat the West and embrace the nations of Asia like an elder brother protecting his younger siblings. As it turned out, the Japanese domination of Indonesia in 1942-1945 brought greater pain and suffering upon Indonesians, many who were taken captive as slave labourers (romusha) and comfort women (ianfu).

By making Asia Raya, Anka said he hopes to make the point that not all Japanese of that time were oppressors. “There were, in fact, some heroic individuals,” said Anka. “Granted, ‘heroic’ is a biased term because it depends whose side you’re on. As an Indonesian, my personal bias would be for the ideology that promotes independence and freedom from foreign imperialism.”

“The film’s message is that heroes can come from anywhere,” he added. “They don’t have to do great, out-of-this-world things to be remembered by many. Someone who consistently does small, meaningful things to honour others is a hero, too.”

While the 1940s is remembered as a heroic period for Indonesians, heroism remains an important theme that transcends eras and generations in the Indonesian identity. A cartoonist who is penning this heroic spirit in the contemporary setting of 21st century Jakarta is Franki “Pepeng” Indrasmoro through his graphic novel, Setan Jalanan. Pepeng is best known as the drummer of indie band Naif and superband Raksasa.

“When I was a little boy, I used to draw this masked motorcyclist and call him Setan Jalanan—the character subconsciously haunted me well into adulthood,” said Pepeng of his hero, a renegade masked hero on a motorbike who fights crime on the streets of Jakarta.

But more than just a thrilling comic book with big machines and a mysterious hero, Setan Jalanan is actually meant to educate its readers with traffic laws and street ethics. “I spend a lot of time on the street, where I see uncooperative motorists being complained for their reckless and inconsiderate attitudes. And then there are the law enforcers who aren’t always consistent with the law,” said Pepeng.

Asked why he called his hero Setan Jalanan (“Street Devil”), Pepeng said, “Philosophy says that the devil appears in the ambiguous space ‘in-between’ darkness and light. When you hesitate to make a decision, the devil starts whispering the decision for you.” Setan Jalanan is a hero in the public’s eyes due to his crime-fighting mission, but at the same time his heroic quest for justice has made him a fugitive in the lawmakers’ eyes.

In 2013, Indonesia may no longer be fighting for political independence. But if traffic can be a reflection of a nation’s dignity, there is still a lot of fighting to be done in order to make Indonesia a place where justice is upheld and citizens respect one another. While the capital’s traffic and motorist attitudes reflect how far Indonesia currently remains from this ideal, Pepeng brings to life his fantasy of a hero who fights to make it happen.

As Anka said, heroism in 2013 comes in many forms. “A man who cleans the streets could be a hero, because he is doing something for the greater good of the community,” he said.

Likewise, Roy agrees that heroism could be something practiced in one’s daily calling. “If heroes of the past fought against imperialists, heroes today fight against the self – against complacency and our own vice tendencies,” he said. “We may not be expected to shed blood today. But as long as we live as honest, courageous, and responsible citizens, we’re living as heroes and that’s all that matters.”