Was it a coincidence or something more?

Our Editor emailed me with a list of upcoming themes and said that she thought that I might “have something up [my] sleeve for Ghosts, Magic and Mystery.”

How strange, I thought, what should make her think that? After all, I don’t have any skeletons in my cupboard, let alone up my short sleeves.

The next morning, I went through my morning ritual: made a mug of coffee and settled down with the Jakarta Post. The lead story on the front page was headlined When threats against KPK turn sinister.

We all know that the Corruption Eradication Commission has regular battles with the entrenched forces of the business community with their state-employed cohorts. So what were the sinister forces at play here in KPK’s investigation of the National Traffic Police?

I read: “In the past few days, security guards, staffers and those who regularly visit the KPK headquarters in South Jakarta have begun to notice a number of peculiarities, such as flowers being spread around one corner and red dirt sprayed in another. Others claimed that they saw goat hides with letters scrawled all over them. They also found powder with some believing that it was ground from bones.

“For those familiar with black magic, these items are known to be used in the exercise of it.”

My caffeinated mind refused to boggle until I read the response of the KPK spokesman Johan Budi. He said, “We believe in God, and our investigations will not be encumbered with superstitions like this.”

His name and position in the KPK suggests that Johan is Javanese, in which case we can also presume that he is imbued with Primbon, a Javanese almanac of mysticism, as well as his particular religious brand.

About 20 years ago, Permadi was known as a soothsayer, making inaccurate predictions about the year ahead. More recently, in 2009, and now a politician from the opposition Gerindra party, he suggested that President SBY’s birth date, September 9th 1949 (wow: four 9s!) carried the shadow of “cosmic misfortune” and that he would always attract disasters to this country. Since SBY’s election in 2004, there has been the Aceh tsunami, many earthquakes and volcanic eruptions, and the Lapindo mudflow, and…

Those of us who claim to be rational think Permadi is weird. Yet, there are surely moments when we observe an aspect of Indonesian life which we cannot easily rationalize.

Apart from initially wondering how come Dr. Gigi had so many surgeries, my first ‘mystery’ was ketok magic, the secret panel beating business, often run by blokes from Blitar in East Java. The word ‘ketok’ is onomatopoeic, the sound of poking at dents. The ‘magic’ is that it is done behind closed doors, and can also involve urus, the laying on of hands. The process is reputedly completed with urination as this is believed to protect the car from another crash.

The mysterious dukun generally specializes as a witch-doctor, faith healer, shaman, medicine man, bone setter, or clever-feller, but some are jacks (or jills) -of-all-healing-trades. Ask any of your close Indonesian work colleagues if they’ve ever visited a dukun, and most will say they haven’t, or will be somewhat embarrassed to admit it because they now see themselves as ‘westernized’. Yet they will almost certainly know someone who has, possibly even an expat.

Years ago I had a British colleague who fell ill. He thought that an ex-girlfriend had put a spell on him, although when I asked her she denied it. He made regular weekend trips into Banten, West Java, to visit a dukun but didn’t get better. For his final visit he had to procure a swan’s egg, a logistical nightmare we all thought. He did get better, but I know from personal experience that glandular fever can do weird things to your mind.

More mysterious was the case of Boy. He was employed by my neighbours, a Glaswegian and his wife, to be the hairdresser-in-residence in the salon they’d opened in the front rooms of the house opposite.

Although Boy was very good at his trade, he liked to wander and couldn’t always keep the appointments he’d made with clients. One weekend, George and his wife went to visit their (and my) furniture maker in his kampung outside Sukabumi. Business concluded, they talked about the goings on in our street and George mentioned the problem of Boy. The tukang kayu said he’d fix it.

For the next month, Boy went nowhere, saying that he just couldn’t go out – but wanted to. George and I remain boggled to this day.

Another mystery to me is that in a city which claims to be cosmopolitan, there should be knee-jerk reactions from City Hall to rumours of ghosts, as happened as recently as December last year. 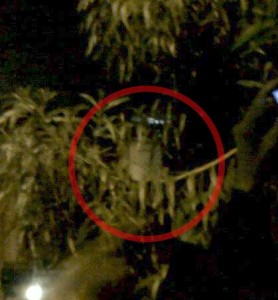 When a child relieved himself against a mahogany tree in Roxy, Central Jakarta, on Nov. 26th last year a pocong (shrouded corpse ghost) and kuntilanak (vampiric female ghost) revealed themselves to him. In the hysteria that followed, hundreds of people visited the tree with at least ten becoming possessed by spirits.

So the Jakarta Park and Cemetery Agency cut the tree down; however, this was a waste of time as the apparitions apparently moved to an adjacent tree.

And that rather begs the question of what he knows about the black magic outside the KPK offices.

Ghost hunters should either watch a sinetron (soap opera) or check out this site: http://www.spookycorner.com/84/haunted-places-in-indonesia/

Recommended places with apparent apparitions include the Cipto Mangunkusumo Hospital in Cikini which is rife with ghosts. One particularly popular one is a doctor with a surgical knife and hands covered with blood. “There are also the spirits of dead people (who/what else?) floating around [at] night (when else?) which show their form to someone who’s alone (of course!).”

Later, visit the Jakarta History Museum. Visitors “complain of a strange feeling” as they enter what was once Stadhuis, the administrative headquarters of the Dutch East India Company and later of the Dutch Colonial Government. Former prison cells lie beneath the front portico, and Fatihillah Square was used as the place of executions. Is the strange feeling a kinship with tormented souls?

Finally, “legend has it that there was once a priest or pastor that died at Jeruk Purut Cemetery (in Cilandak) with his head cut off. The real reason why he died with his head off was unknown (really?) but this priest is always accompanied by his dog.”

As for my encounters with the far side, I’ll tell you later about the banshee I heard wailing in Ireland, but I must close now because a butterfly has just fluttered in and I have to greet my expected guests.