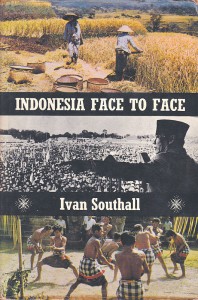 I bought this book in a second-hand bookstore in Singapore in the early 90s when I was a newbie here; only now have I come to reread it. What I find fascinating is that many of his observations still apply.

Ivan Southall (1921-2008) was an Australian writer best known for young-adult fiction, but he also wrote seven books for adults, including Indonesia Face To Face. In 1963, he came to observe the work of the (Australian) Volunteer Graduate Scheme for Indonesia.

The pegawai were “young people who worked in Indonesia for a couple of years or so, not as ‘experts’ on fat salaries, but as ordinary servants of the Indonesian government paid in accordance with the local scale.”

A lengthy chapter, The Fledgling Is A Dubious Bird, is devoted to their pre-departure briefing.

“Indonesia is a very strange mixture. It is not a land of ‘natives’ or ‘coolies’. Nor is it just a rich green country, with sweet, gracious little people and quaint foods, song and dance. It is a country full of social and economic contradictions, but it is also a new, self-respecting country with its own culture and its own way of life.”

One may argue that when one now reads of communal and religious strife, and corruption at the highest levels, that ‘self-respect’ is not universal.

Before his visit, Southall was also a ‘fledgling’ and he was warned about the pitfalls of Jakarta.

“It’s the first month or two that count. That’s when you pick up everything that’s going: amoebic dysentery, malaria and so on. I’ve heard that the cities stink with open sewers and the place is rotten with TB. It’s true, you know. I’ve seen it on TV.”

When I came here a quarter of a century later, at the end of ’88, I knew nothing of this. But I do now. As I wrote about street food in Culture Shock! Jakarta (no apologies for unashamed plug): “you may find the entire experience less than appetizing as you settle down to eat next to an open sewer with rats.”

Regarding TB, according to USAID the population is 328 million (give or take a hundred million?) and in 2010 there were 302,861 notified cases. Furthermore, from July 1st this year the UK Border Agency requires Indonesians who wish to stay in the UK for more than six months to be tested at an approved clinic and be free from tuberculosis before applying for a visa.

In ’63, as in every year following the departure of the Dutch in 1950, the country was impoverished. So, Southall found himself burdened with Australian oleh-oleh to pass on to the volunteers; a projector lamp, lengths of material, batteries, cans of milk, a box of cheese, shirts, nappies, feeding bottles and medical supplies.

Of that list, I’d love a box of cheese, meaning real cheese and not that processed block of plastic found in most supermarkets. Oh, and if anyone’s going back to the UK for a while, please bring me a jar of Marmite.

“Djakarta is an assault upon the senses of sound, sight and smell. Indonesia is much more than Djakarta, but it is here that the country begins and ends. Djakarta is the shopfront, the doorway in and the doorway out. What happens in Djakarta may make the cable page or the front page of newspapers from Melbourne to Minneapolis. What happens in Talangpading (where the hell is Talangpading?) may not even make the back page of newspapers published in Djakarta.”

Earlier this year, the post office discontinued their telegram (cable) service, obsolescent thanks to the onslaught of the internet. The circa nine million folk who left Jakarta for the recent Idul Fitri mudik went back to their roots to show off their latest clothes and smart phones. The latter are the tools which enable yearly access to local news, friends and family. However, I’ve also no idea where Talangpading is; search engines only offer Talang Padang in Lampung.

In April ’63, Indonesia and Sukarno were enigmas to western countries and Southall analyses the reasons, many cultural, others historical, thus predating by one year Sukarno: An Autobiography (as told to Cindy Adams). Regarding the future of the country after Sukarno, Roeslan Abdulgani, the Minister of Information and former Foreign Minister, told Southall: “We hope by then to have created beneath him a sound body of administration, so that the top may change without ill effect, that the top in fact will not matter so much.”

A forlorn hope, given the coup and pogrom just two years later, and few would describe the many current corrupt administrations, from the “top” down, as being “sound bodies”.

Much of the book is devoted to descriptions of the social divide experienced by the rakyat of Java, Sumatra, Kalimantan et al who were encountered by, and hopefully benefitted from, the work of the pegawai. The issues they all faced included illiteracy, hunger and malnutrition, a population explosion, and a lack of infrastructure – roads “had to be re-made each year after the torrential downpours of the wet season.”

There are also accounts of pegawai experiences, including Southall’s initial culture shock. One may hope that Dan Quinn’s Gunung Bagging website will prevent further potential disasters as almost befell a doctor and the two English teachers who he lead up Gunung Awu, on the island of Siau, off the north coast of Sulawesi, (previously mere acquaintances, the teachers later married).

Southall’s fifty year old book is a valuable document about where Indonesia was in the Sukarno era and, perhaps in too many ways, still is. It is, therefore, most certainly worthy of a reprint. After all, if we have no history, we have no future.

Note: Australians can borrow a copy from the National Library (http://trove.nla.gov.au/work/15385794).

Going, Going, Gone: In Search of the Ultimate Longhouse