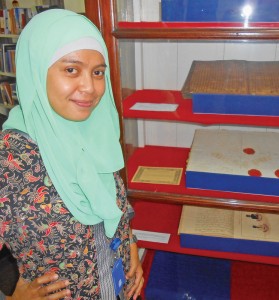 “I guess if there was a fire and I could only save one thing, it would have to be the 16th Century copy of Negarakertagama (‘The History of Java’) by Prapantja,” Citra said furrowing her brow and tapping her finger on her temple. “But really it’s so hard to decide. There’s also Babad Diponegoro (‘The Chronicle of Diponegoro’) [The first biography in modern Indonesian history, chronicling the life of the prince of Java, who lived from 1785 to 1855]. And there are also a lot of famous paintings here at the Library.”

A library is only as good as its librarians. Luckily, the National Library, located on Jalan Salemba, in the heart of Central Jakarta, has Citra.

For the last six years, Citra, who boards a train and a bajaj every day, wakes up well before the sun comes up in order to travel the two hours it takes to get from her home in Depok to the nine-storey library, where she mans the information desk or the media centre, pointing people toward the periodicals and newspapers.

“The most satisfying thing about what we do is the happiness that comes with helping people find what they need,” says Citra. “We meet so many people every day, looking for so many different things. We help them become more creative by giving them the books, articles and manuscripts they’re looking for.”

Citra is one of 70 full-time librarians, trained and tested to point everyone from kindergartners to octogenarians, towards exactly what they are looking for between the stacks. But Citra and the brigade of librarians aren’t just proud of the books and the wealth of information that line the walls, but also of the rich history of the National Library.

“There are so many rich historical texts here in the building. UNESCO has recognized many documents here, Babad Diponegoro (‘The Chronicle of Diponegoro’), are on the Memory of the World list.” 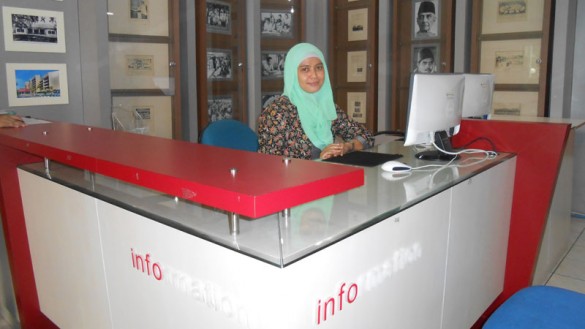 Citra breathed a sigh of relief as she remembered that the delicate manuscripts held in the National Library are stored in fireproof safes on the fifth floor.

Boasting ancient books, manuscripts and even a book of poems from Yogyakarta written in gold ink, from as far back as 1556, the National Library beats a trip to the mall any day.

But that is the problem, with 173 malls to choose from Jakarta has little use for libraries. Hail a cab and ask the driver to take you to the National Library and he may return a look of confusion. Few people know where the National Library is, let alone what’s inside. Citra hopes all that changes soon.

“People may not know much about the National Library, but once they come and see what’s inside and tell their friends, then we will have more people who know about us. For right now, we just have students and scholars roaming the halls. Maybe someday – we have free WiFi – we will have a different crowd.”

A trip to the National Library on a weekday afternoon is a great way to explore a more cultured side of the city. Keep an eye out for Citra, or any of her fellow librarians, they’d be glad to show you around.