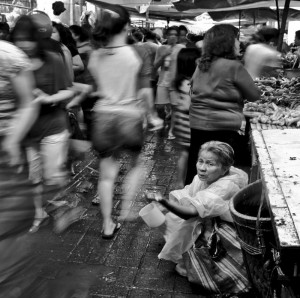 It’s that time of year again, when beggars converge on Jakarta to make money during the fasting month of Ramadhan. Before going any further, I should emphasize that charity is fantastic, provided it is not directed toward scammers exploiting religious goodwill for financial gain.

Religious thinking goes that if you want to score points with God and increase your chances of getting into heaven, then you should give money to the needy, especially during Ramadhan. The Indonesian Ulemas Association has issued a fatwa against begging, but it is largely ignored. Hence there are thousands of people, mostly from West Java, flooding into the national capital to solicit for alms. Some have made their own way here, while others are assisted by criminal syndicates that take half of their earnings.

Indonesia has not reached the stage of India, where there have long been reports of children having limbs amputated to make them more successful beggars. Instead, Jakarta has a brisk business in the rental of babies for Rp.50,000 a day. Obviously, not every woman holding a baby and seeking alms is part of the so-called begging mafia. But if you pass by certain streets each day, you can start to recognise the same women using different infants.

A good beggar can collect from Rp.70,000 to Rp.200,000 a day. That beats working for minimum wage, which in West Java is only Rp.850,000 a month. One of the prime begging locations is outside Istiqlal Mosque. Also popular are traffic lights at major intersections.

Many freelance beggars live in the simplest rented accommodation alongside riverbanks and railway lines. If they fail to pay off gangsters and law enforcement officers, they may risk expulsion from lucrative areas. Organised beggars are trucked out of the city at night to sleep in warehouses in Bogor and Tangerang.

Begging is a profession, make no mistake. They are selling penance to people purchasing peace of mind. On the pedestrian overpass near my apartment is a young woman, who sits there from morning till night, with her hand outstretched. Sometimes she has white mud splattered on her leg for effect. “Give me money for food,” she asks. Last week I offered her a meal at a nearby food stall. She declined, explaining she was “busy” because it was 6pm and many commuters were passing by, so I should return later to buy her dinner.

Some beggars are school students, keen to get spending money for the post-fasting holiday period of Lebaran. Others are saving money for anything from school fees to down-payments on a motorbike or even a house. It’s disconcerting to be asked for money by overweight people.

Begging and giving money to beggars in Jakarta are banned under a 2007 bylaw that carries maximum penalties of 60 days in jail and a Rp.20 million fine. Authorities conduct regular raids against panhandlers. In the past, child beggars were at risk of being beaten and imprisoned in a grim rehabilitation centre for the homeless. Those apprehended could pay Rp.50,000 for an instant escape, while those incarcerated said much more had to be paid for release. Jakarta’s new administration has adopted a gentler approach. Governor Joko Widodo has ordered public order officials to continue raids but to stop using violence. Deputy Governor Basuki Purnama has announced a crackdown on gangs exploiting children and babies, and plans to provide vocational training to older street kids.

Beggars at Harmoni in Central Jakarta say there have been several raids this month, but officials let everyone off with a warning to stop begging. In West Jakarta, officials expect raids to nab up to 100 beggars a day. In South Jakarta, public order officials are monitoring key intersections and have published a pamphlet advising people to ignore beggars.

Charity should not be for just one month of the year. There are reputable local charities that help orphans or street kids, or those that provide the needy with vocational skills and capital to start small businesses. You could also discretely give money to a scavenger who earns less than a beggar.

Theoretically, the government should provide social security, but a social safety net won’t discourage beggars if people keep giving. Islamic charities administer zakat (tithes – a percentage of one’s income) and sedekah (alms: often food, clothing and cash). If you do engage in philanthropy, will you feel any less heartless if you ignore those miserable children tapping on your car window?

Saving Energy at Home: the Revolution in Green Consumption