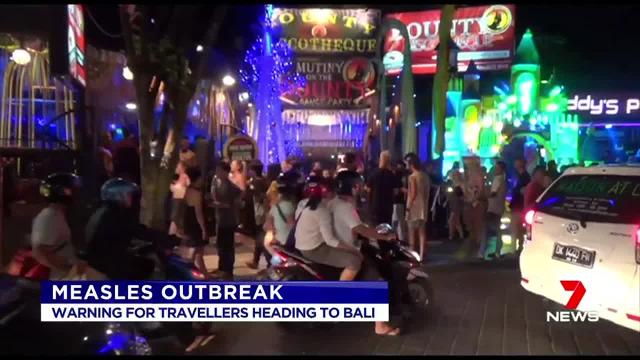 Both Western Australia and New South Wales have issued a health warning after a third case of measles was diagnosed and traced back to Bali.

Twenty cases of measles from Bali have been diagnosed in Western Australia since 2013, with seven of those from 2017.

Measles is treated as a high public health concern due to the risk of local spread – including to those most vulnerable to infection.

People are also being warned about potentially catching the infectious disease in Sydney after a young child who developed it after traveling to Bali took a train with family from St James in the CBD to Bankstown in Sydney’s west, before spending time in various areas in the city.

The infant was too young to be vaccinated and NSW Health has voiced fears for members of the public who may have come into contact with the child between Friday March 16 and Wednesday March 21.

The baby is now isolated and recovering at home and NSW Health is now warning those who may have been exposed to the illness to visit the doctor and limit outside contact.

Measles is highly contagious and is spread in the air by coughing or sneezing.

Symptoms of measles include fever, sore eyes and a cough followed three or four days later by a red, blotchy rash spreading from the head and neck to the rest of the body.

Photo courtesy of The West Australian