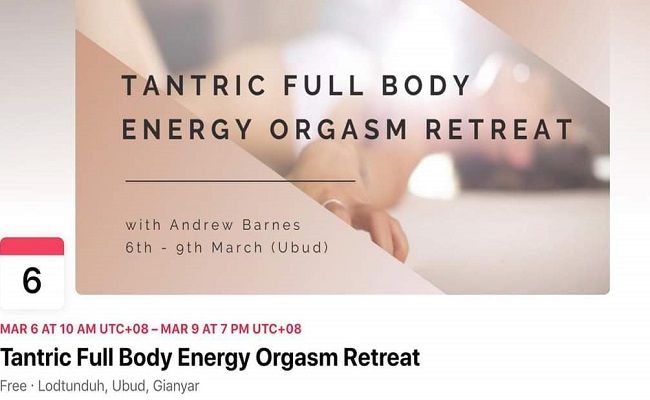 Andrew, alongside his partner Xia Lee, opened the yoga class and uploaded an advertisement via social media. The course was offered with a charge of US$600 or Rp8 million, held from Saturday 6th to Tuesday 9th March. However, the post was soon deleted.

The Bali Regional Police, Gianyar Police, and Ubud Police immediately conducted an investigation as soon as they learned about the yoga event.

Andrew was found by local police on Friday 5th March and was escorted to Ubud Police station. He was questioned until the early hours of the morning only to conclude that no criminal charges could be bought.

Based on the investigation, a yoga training plan related to sexuality therapy was to be carried out. The general manager and hotel management staff at the planned orgasm retreat location stated that the activity had since been cancelled.

“The hotel stated that there will be people carrying out activities, namely yoga, because there are also yoga mats and so on. But one day before the event, the person in charge had cancelled due to the backlash received on social media,” said Head of Criminal Investigation Unit of Gianyar Police, AKP Lusa Lusiano Araujo.

Furthermore, witnesses including two foreigners from Canada and Australia were unaware that such activities are prohibited in Bali. According to one of their statements, six people had registered for the planned activity, but all the registered names that registered were recorded only as initials.

“We checked for clarification regarding the viral post. When examined, Andrew and his friends felt that they didn’t fit the words they uploaded, they also didn’t mean to say what they imagined. They also apologised because the activities they wanted to do were yoga and meditation,” he explained.

After checking immigration documents and residence permits, Andrew stated that he has an investor KITAS valid until 8th November 2022 and his colleague Xia Lee, who was in charge of the event’s administration, has the same visa.

“Detention is needed because no criminal elements have yet been fulfilled to be detained. There are no reports from those who feel they have been disadvantaged either,” concluded Lusa.