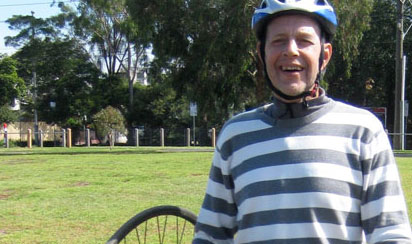 I grew up in Sydney, Maroubra which boasts a beach renowned for wild, rough surfs. My wife, dog and I have a house in St Ives, Sydney and we also have an apartment in Cikini, Jakarta. I feel equally at home in both places.

Rules. Australians are bound by quite explicit (written down) rules and laws, and Australians are quick to remind you what they are. Indonesian society is more regulated by customs that are usually implicit, and not written down, which makes them harder to learn and understand than Australian rules. There is far more tolerance extended to foreigners in Indonesia who don’t understand these customs or codes than in Australia. Driving is a good example. In Australia drivers are expected to follow traffic laws and there is precious little tolerance for drivers who don’t. In Indonesia on the other hand, in any given situation, drivers tend to negotiate and are guided by trying to find the best solution rather than following a set of rules or working out who is ‘right’ or ‘wrong’. The different attitudes manifests itself in Australia in the form of ‘road rage’, with cyclists bearing the brunt of much of this uncalled for verbal abuse. In contrast I’ve cycled thousands of kilometres in all parts of Indonesia and not once have I experienced road rage.

You run a cycling tour service here in Indonesia, when did you launch Cycle Indonesia?

I did the first trip in January 2009. This was a trip of 27 days covering 1200 km. Cycle Indonesia is more of a Cultural Immersion service. I’ve chosen a part of Indonesia that, for the most part has remained untouched by tourism. This permits riders on my trips to experience Indonesia ‘as it really is’ not something that’s been created to satisfy western tourist tastes.


What made you decide to open a cycling tour service here in Indonesia?

The whole thing just evolved.  In 1995 I was working in South Sulawesi and I was struck by the lack of modern commercialism on the island and it seemed like it might be fun to cycle ‘somewhere’ on the island.  So my son and I bought some Brompton folding bikes and in 2000 off we pedalled, 365 km to Toraja Land (neither well organized nor well equipped) but we had a ball, sleeping in police stations, schools and peoples’ houses. In 2006 we organized another trip, this time we had maps and a far better idea of a ride-able route. We took three weeks to do the circuit. Once again we had a ball, learned lots, and decided that we’d organize a trip for others. After our first successful trip in 2009, we decided that shorter trips, in terms of both time and distance, seemed to be more the go. Also riders preferred mountains to flat plains. So, since then we’ve developed a range of shorter routes encompassing geographically mountainous areas.

Can you tell us about your service and what a typical tour entails?

We organize just about everything – the route (which we’ve tried at least several times); the accommodation (best available); the food (modified Sulawesi Indonesian style); the support vehicles and bike mechanic; Police approvals.

What kind of clientele do you usually encounter?

Over nine trips we’ve had 80 riders. 40% have been ladies, 65% have been 50+ years. Thirteen have come from the US, most of the rest from Australia, NZ and Jakarta (expats). Overwhelmingly they are looking for ‘something different’. The camaraderie that develops with groups, for me, is one of the most pleasing features of the trips. Networking that starts during trips continues afterwards.  We now have Cycle Sulawesi Alumni rides in Sydney. Numerous riders sign up for second trips and one rider has signed up for three.

What was the biggest culture shock any of your riders have experienced during a tour?

I would say the hospitality and infectious friendliness of the people (particularly the kids), the thoughtfulness of the drivers, and the welcoming nature of official institutions along the way. On most rides we are invited into peoples’ homes, schools, mosques, churches, community health clinics and police stations.

As a cyclist, what are your thought on the fixie (fixed gear bicycle) craze that’s sweeping Jakarta?

I’ve haven’t ridden one of these bikes since I was about 8 years old. You wouldn’t catch me on one now! They have no place in cycle touring.

The Most Down-to-Earth Restaurateur in Jakarta