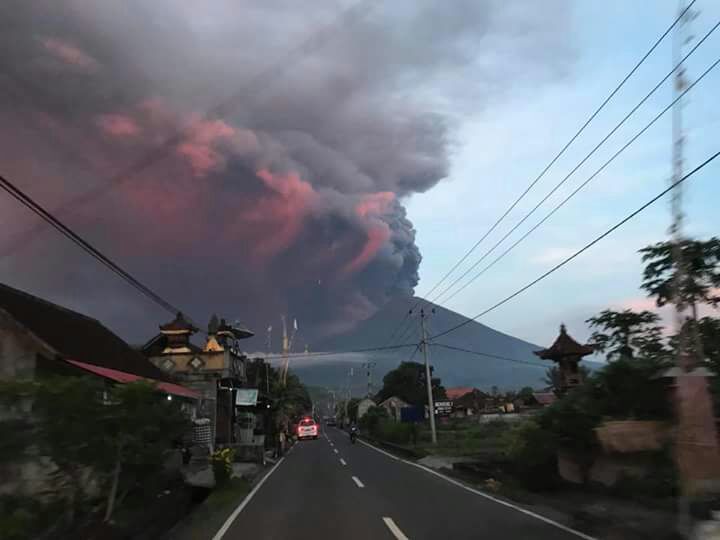 The alert level for Mount Agung in Bali has been raised to the highest level following sightings of smoke, fire and small eruptions. According to authorities, these are all signs of an “imminent” risk of larger eruptions.

“Continuing plumes of smoke are occasionally accompanied by explosive eruptions and the sound of weak blasts that can be heard up to 12 kilometres from the peak,” the Disaster Mitigation Agency (BNPB) said in a statement. “Rays of fire are increasingly visible from night to the following day. This indicates the potential for a larger eruption is imminent,” it said.

Swiftly after the raising the alert level on Monday, the BNBP told nearby residents, particularly those living in an eight to ten kilometre radius around the volcano to evacuate areas near the summit.

Bali’s I Gusti Ngurah Rai airport has also been closed for 24 hours in response to the increased alert level of Mount Agung. The decision is a precautionary measure following the spread of volcanic ash which could be dangerous for flight navigation. However, the airport management has said that the policy will be constantly evaluated.

“The airport is closed for the next 24 hours, but we will evaluate this policy every six hours,” said I Gusti Ngurah Rai spokesperson Arie Ahsanurrohim, as quoted by Liputan6.

Around 133,000 residents around Mount Agung were forced to evacuate to temporary shelters after the alert level of Mount Agung had been raised to maximum in September. However, many some of them were allowed to return to their homes in late October after the alert level was lowered. The volcano last erupted in 1963, killing more than 1,000 people and razing several villages.