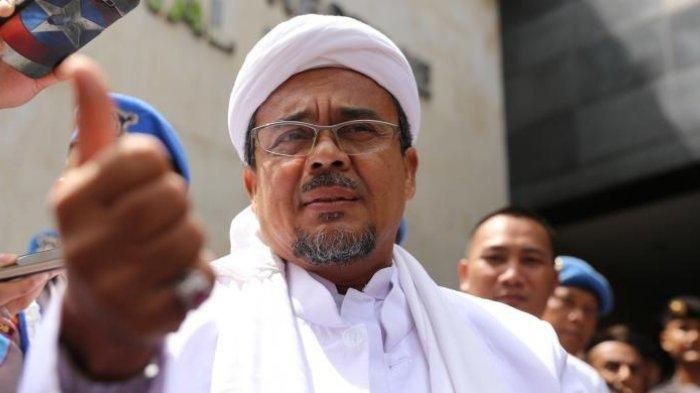 Habib Rizieq Shihab, the FPI leader, has arrived back in Indonesia from Saudi Arabia. A number of events have already occurred since his return as mass crowds of supporters gathered near his residence and the airport, blocking roads and highways.

Habib Rizieq arrived at terminal three of Soekarno-Hatta Airport at 10am this morning after being in Saudi Arabia since 2017.

When greeted by his supporters at the airport, Habib Rizieq asked the masses to open a path for him while yelling “Allah is the Greatest!” Habib has now returned to his residence and has delivered a speech in front of his supporters.

At his residence, Habib was greeted by masses lining up along the street cheering, some even lighting up firecrackers. With celebrations of Habib’s return, the gathering of large masses has also caused some complications throughout the day.

The density of masses who greeted Habib caused traffic congestion and even delayed numerous flights at Soekarno-Hatta airport.

“The important thing is to be orderly and maintain mutual safety during the pick-up. We deplore this crowd and the potential rise of COVID-19 clusters, as well as the impact on the airport and communities around it,” said Daniel Johan, chairperson of the PKB DPP.

A viral video clip has shown a man dying at traffic lights in West Jakarta earlier today on the side of the road amongst crowds of people gathered for Habib’s arrival. The cause of his death and involvement in the greeting of Habib is still unclear and under investigation by police.

Medical officials were able to comfort the man in his final moments as they moved him away from the large crowds on the road.

Habib Muhammad Rizieq Shihab is a Habib whose lineage can be traced back to Sayyidina Ali bin Abi Talib through Imam Ahmad al-Muhajir.

With the full name of Habib Muhammad Rizieq bin Hussein Shihab, he is an Indonesian Islamic figure who is well-known as the leader and founder of the Islamic Defenders Front (FPI) organization.

Habib Rizieq, in short, is also famous for his sometimes controversial actions.

In 2008, he was accused of being involved in the Monas riot, so he was sentenced to 1.5 years in prison.

In May 2017, Rizieq was named in a criminal case involving sexually explicit messages he exchanged with Firza Hussein. The charges were brought against him under the 2006 Anti-Pornography Act, a law he helped pass. On the 29th, he was charged and summoned to appear as a suspect, subsequently fleeing Indonesia for Saudi Arabia on the pretext of performing the Umrah.

His name was also raised in a series of protests against the Islamic Defense Action or also known as the 212 action series. This action began in December 2016, when 212 masses from various parts of the country echoed their support for the alleged case of religious blasphemy that ensnared the former governor of DKI Jakarta, Basuki Tjahaja Purnama (Ahok).