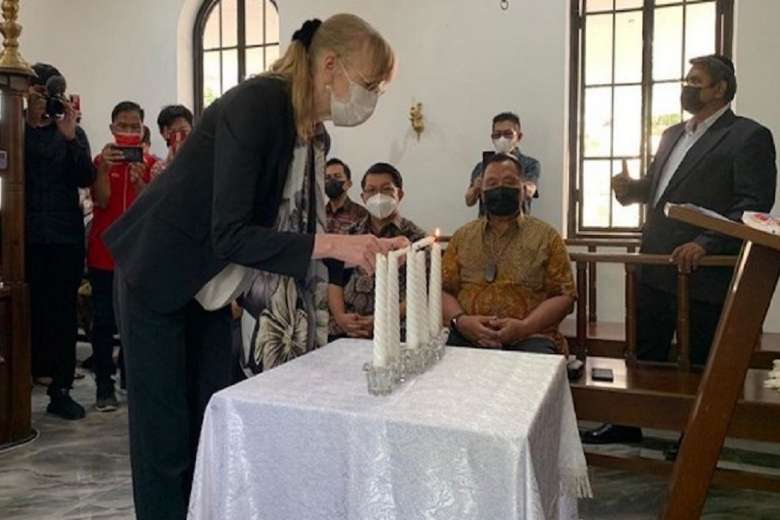 The first Jewish Holocaust Museum in Indonesia has been built in Minahasa, North Sulawesi, according to the German Ambassador to Indonesia, Ina Lepel.

According to her Twitter post @GermanAmbJaka on Thursday 27th January, Ina Lepel visited the location of the museum.

“What an honour to be in Minahasa Flag of Indonesia and speak at the opening of its Holocaust Museum on #InternationalHolocaustRemembranceDay (27 Jan). Germany will always support remembrance towards this “universal lesson” and stand up against racism, anti-Semitism, and any form of intolerance,” said Lepel in her video.

What an honour to be in Minahasa ?? and speak at the opening of its Holocaust Museum on #InternationalHolocaustRemembranceDay (27 Jan). Germany will always support remembrance towards this "universal lesson" and stand up against racism, anti-Semitism, and any form of intolerance. pic.twitter.com/Yv8LeRNE3t

Lepel continued to say that she was purposely present at the opening of the first Jewish Holocaust Museum in Indonesia.

“I attended the opening of the Holocaust Museum on International Holocaust Remembrance Day (27th January) in Indonesia, where a museum of this kind is, for the first time in Southeast Asia, from the initiative of the Jewish community here,” said Lepel.

“We keep remembering the extraordinary crimes that occurred in the Holocaust. Otherwise, we risk repeating them again. However, if we remember, we can be very vigilant and act immediately when signs of hatred, racism, and anti-Semitism appear. Therefore, the establishment of this museum is a very good development, especially because the museum will target young people as a learning experience. I am very happy to be able to visit this museum.”

However, the establishment of this museum brought objection from several parties, including the Indonesian Ulema Council (MUI).

“Because this is a form of racism, a form of genocide that is contrary to human values, it certainly causes many problems. Among them are humanitarian issues, not religious issues, not political issues,” explained the Indonesian Ulema Council Secretary-General Amirsyah.

Furthermore, the Holocaust museum is considered to have the potential to offend Palestinians, who are still embroiled in conflict with Israel.

The Holocaust was the massacre of Jews and other persecuted minorities, such as homosexuals, disabled people, and gypsies, by Nazi Germany during World War II. The regime is synonymous with the worst acts of hatred, bigotry, and racism in the 20th century.

Seeing the pros and cons, the Deputy Governor of North Sulawesi, Steven Kandow, commented, “There is no intention of the government to discredit certain groups, certain religions, let alone our brothers and sisters in Palestine,” as reported by the Official iNews YouTube channel, Wednesday 2nd February.

Kandow added that the existence of this museum is a lesson from the past that must be understood.