Jero, Wendyl and Made

Meet Wendyl Smith, an American expat inspiring a small group of farmers to create a coffee that is out-of-this-world delicious and livelihoods that are sustainable.

When did you start living in Kintamani?

I moved to Kintamani early 2009. I had long felt called to the mountains around Batur. I already had a deep friendship with Jero Balian, who is a priest at the Bukit Mentik temple down in the Batur caldera and some of the elders from the temple. I wanted to experience Balinese community life more intimately, to learn how to farm, to take care of the land, and to be self-sufficient. Jero offered that I could build a little house on her farm. Magic!

How did you first come to Bali?

Almost 30 years ago my dad – who was a volunteer Country Director for an international NGO and living in Jakarta – wrote to me saying I would love Bali. He was right. After exploring parts of Java and making photos, videos and recordings for a multimedia dance/theatre project, I took the harrowing bus ride from Jogja to Bali and arrived, unbeknownst to me, on Galungan day. There were penjors lining the streets from Gilimanuk. My first thought was “Wow! Who ARE these people who decorate their streets and houses so beautifully?” There was something so familiar about Bali; the ceremonies, gamelan, people. I never wanted to leave, so I developed a business of designing and producing clothes from unique modern batik patterns, sending them to stores in the U.S. I have been working with handicrafts and export to the U.S. ever since.

Tell me about your friend Jero, the Balinese holy woman.

We met at the Bukit Mentik temple, where I had been spending much time, often accompanied by friends, meditating at the various shrines and caves in and around the temple. It was only after I was invited to do my first of two pewintenan(purification) ceremonies by Guru Mal, one of the temple elders, that Jero, Guru Mal and his wife, Ibu Rintis and I started exploring other temples all around Bali, sometimes sleeping overnight on the temple pavilions.On one of those pilgrimages, about eight years ago, the gods told Jero that I must be her attendant, her pengiring. According to tradition in Batur, Jero is so sacred that she is not to go anywhere alone. Well, she does anyway. But if she is to go farther than from her home to her farm or the market, I usually accompany her. Even though I am Buddhist, not Hindu, and a foreigner, I am received very well in my pengiring role by the temple community. They are grateful that Jero has someone like me to look after her. I joke saying I am really just her driver.
What inspired you to start roasting coffee? 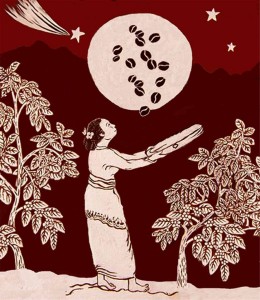 There was a thriving Indianized Hindu culture here in the mountains long before the colonization of Bali by the Javanese Majapahit Empire. There are statues in the Penulisan Temple, the highest temple in Bali, that date back over 1,000 years and are of classical Indian style. There are no castes, the villages are ruled by bipartite councils of elders, and the priests are chosen through trance mediums at temple ceremonies when still small children. Jero Balian (not to be confused with Balian healers) was chosen by the gods at nine years old and her holiness was tested with the ability to hold fiery coals. There are Jero Balian priests at four temples up here. They are living expressions of Dewi Danu, the virgin goddess of Lake Batur, and live the life of Dewi Danu. Their special role is to call the gods to the temple ceremonies. Before Jero was chosen by the gods, there were signs; she would sit up in her sleep and make the motions of performing ceremonies.

Up until a couple years after I moved here, Jero, like all the farmers in the area sold her coffee cherries in the market. After I expressed a desire to try roasting coffee, Jero started experimenting with processing coffee cherries.

Her first attempts to get the coffee bean out of the cherry were to press each cherry with her thumb. I suggested a step up to whacking a pail of cherries with a hammer. Then came the big piece of wood and the tub, and finally, due to increased coffee demand, to the most high tech — a hand cranked machine that separates the flesh from the bean.

I first tried to roast the coffee in a fry pan over a fire the way many Balinese roast their coffee, but it had a bland baked flavour. After a bit of research, I discovered one could roast coffee with a hand cranked popcorn popper. After months of trial and error and lots of burnt beans, finally epiphany! Is this what really fresh roasted coffee tastes like? I was amazed at the flavour: chocolatey, sweet, earthy. I started sharing the results with friends who really loved it. At that point in Bali, you really couldn’t find fresh roasted coffee.

I wanted to find a way to help Jero and other farmers. They get so little return for all the effort and money they put into being good stewards of the land and providing food for the population. Jero wanted to learn how to roast and eventually she started selling coffee to my friends in Ubud in little brown bags. Inspiration and encouragement came from a few creative and bighearted friends, one of them finally holding up the little brown bag saying: “This is an excellent product. Maybe you could at least put a name on it.” It was only later when I was describing the whole roasting process, including Jero winnowing the hot roasted beans to cool them under the starry night sky with the cool mountain breezes, carrying away the chaff that another friend burst in almost uncontrollably, “How about calling it Cosmic Coffee?”

How is coffee grown and processed traditionally?

Arabica coffee is grown in fertile, volcanic soil in an arc of highlands from Mt. Batukaru to Gunung Agung. On Jero’s farm, the coffee trees are shaded by citrus and tall hardwood trees. They are nourished with organic fertilizer from her cows and rainwater.

Coffee cherries are picked by hand. Because not all the cherries ripen at the same time, it means coming back frequently to the same tree. Like with any fruit, the best coffee comes from cherries that are allowed to ripen to full bright red to burgundy. Cosmic Coffee uses only red cherries.

The most traditional method is dry processing where you let the berries dry in the sun and then hull them. I understand that more farmers, like Jero, use the wet method where you hull the berries just after they are picked. Then they are soaked from 24 – 36 hours to ferment off the remaining pulp, rinsed and then dried in the sun. The remaining parchment layer is removed with a large mortar made from a hollowed out tree trunk and pestle, both from hardwood.

How do modern techniques affect the nutritional benefits of coffee?

I think the main factor affecting coffee’s nutritional benefits would probably be age. As coffee has oil in the bean, which is most apparent with darker roasts where the heat of roasting forces oils to the surface, coffee goes rancid quickly. Coffee has antioxidants and minerals and has been shown to help prevent Parkinson’s, dementia and some cancers. Cosmic Coffee’s commitment is to get the coffee to the customers within 24 hours of roasting.

Cosmic Coffee is sold at:

Bali Buda (in September), all stores

Jamal Hussain: The Blessing and Curse of Running a Hotel in Bali