Meet Warwick Purser. The Australian-born entrepreneur who gained Indonesian citizenship through his passion for humanitarian work. 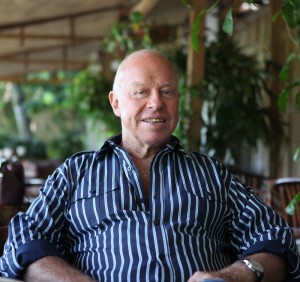 So Warwick, what first brought you to Indonesia?
A one week honeymoon in Bali in 1969, aged 22. I was on my way to London to start work in a big international travel agency. The one week became two weeks, then three weeks because I kept delaying my departure. On the sixth week after totally falling in love with Indonesia I sent a message and advised the company in London I would not be taking up my new job.

You then went on to establish ‘Out of Asia’, one of Southeast Asia’s largest exporters of handicraft products. What did you set out to achieve?
To be honest in the beginning I recognized a good business opportunity as so little Indonesian craft product was finding its way to the international market. Out of Asia pioneered the large-scale export of Indonesian crafts and this found its way into some of the largest and most prestigious retailers in the world. Once I saw how the business so visibly changed the lives of the crafts people involved, and at times there were many thousands, the business became a passion and led to many associated projects such as embroidery work for Acehnese women widowed after the tsunami and in many other cases, providing work for disabled and disadvantaged people and so forth.

You’ve obviously invested a lot of your life in Indonesia, what sparked this passion to help Indonesia and its people?
It is very easy to develop a passion about something which can so greatly improve the livelihoods of people involved in it. Although my efforts might have had an impact in making this change I was sometimes surprised with the relative ease in terms of effort from my side that produced this change. The change so outbalanced the effort. This change meant kids could be educated, clothed properly and that good food and living conditions were always available. The craftsmen and women deserve most of the credit, not me. I was simply the bridge between this and the world market who buy and use the products. When people tell me that those who have benefited should be so grateful I always reply – no it’s me that should be grateful because I am one of the few in life given a passion for what they do – and when you have a passion like this you never feel like its going to work.

You were an Australian who has now become an Indonesian citizen by Presidential Decree. Was it a difficult decision to change nationality?
It was possibly the easiest decision in my life because after forty years living here I had been “groomed” for it for a long time. I had actually started the process to become an Indonesian citizen and had been warned it would take a long time. I was so lucky, when people at “the top” stepped in and the process was reduced to less than a month. I didn’t ask for special assistance and I was so honoured when it was given.

How has the change of nationality affected your life? Where is home, do you have any family here in Indonesia?
There are no real material advantages – the advantages are what you feel in your heart – a feeling of really belonging. My home is Yogyakarta in the village of Tembi where I have lived for twenty years and where I have a house and a hotel – the hotel used to be my family compound. I also have a house and a hotel in Ubud, Bali but Tembi is where the heart says is my home. Having said that I have a daughter Polly living in Bali so the pull to visit there is strong. I also have an “adopted” family of four children in Tembi. Local kids – two girls and two boys – who I have taken under my wing and look after. I recently brought their mother back from Jakarta where she was working and employed her in Tembi so she can be close to her family. I have a son, Oliver, living in Australia and luckily he often visits.

How were you affected by the 2006 earthquake and the eruption of Mount Merapi in 2010?
Well, the village and its surrounds were pretty much demolished by the 2006 earthquake. But with the help of my friends and HSBC Bank we rebuilt the village and provided everyday living materials including food for many people in the area. Similarly with the Mt. Merapi eruption, although my village was not really affected, lots of areas close to the volcano were devastated. We brought our experience from the earthquake and quickly moved in to help these areas. In the earthquake I lost most of what I owned in my house including an important collection of art but had no time to feel sorry for myself when I was surrounded by people who had totally lost everything and were getting about rebuilding their lives with so much spirit. I was deeply affected by this, filled with respect at the amazing resilience of the people around me. I would like to think that I learned a lot from this experience. It was humbling when you have lost objects of significant value but discover from other people there is so much more to life than worrying about lost possessions. You also embarked on a mission with UNESCO to preserve Borobudur. Could you tell us a little about this project?
Borobudur belongs to everyone including me, and I was amazed by the paltry funds initially made available to restoring it after it was covered by corrosive volcanic ash. The work was urgent because the reliefs and stupas of Borobudur were beginning to be affected by this ash and we had to start cleaning immediately. I got together a group of friends, foreign ambassadors, business people and others, formed a group called Friends of Borobudur and started working with UNESCO to raise the funds so the cleaning process could start immediately – which because there was funding – could!

How has Indonesia grown since you first moved here, and where do you hope to see Indonesia headed in the future?
Indonesian has grown enormously – not always to everyone’s benefit. My hope is that the growth will continue democratically, and the benefit of the growth will affect more and more people not just those “at the top”.

As an Indonesian citizen, what about your country are you most proud of?
The increasing sense of “Indonesianism” and as the country develops, how the next generations are becoming more and more proud of being Indonesian. I am of the older generation and I certainly feel it.