Elora Hardy was part of the first wave of expat kids growing up in Ubud in the 1980’s. Her creative parents would drop the little girl off with friendly craftsmen in various villages where she learned how to carve, paint and batik all sorts of things, but mostly fairy princesses and dragons. In 1994 at the age of 14, Elora went off to a boarding school for the arts in California, then earned a Bachelor of Fine Arts at Tufts University in 2004. Moving to Manhattan in 2005, the young woman talked her way into a job as a designer working for Donna Karan in the weird and wonderful world of fashion. After five years painting on fabric in New York City she returned to Bali in 2010 to join a team of gifted artisans and home designers at PT Bamboo Pure who were building Green School. Elora also has her own design brand, Ibuku (www.ibuku.com).

When did you first come to Indonesia and why?

I grew up in Bali because my parents came here on a trip around the word and stayed. It was 1975, and at first they thought Bali was too crowded, but then of course they fell in love with it. When my mum was in Nepal she saw a woman trekking with her toddler and realized she could have kids and still have fun, so then they had me.

How did you become interested in bamboo and its uses?

When I saw what my dad and the team were building at Green School I thought, bamboo is one thing we aren’t at risk of running out of, and what a cool challenge it would be to make big buildings out of grass. 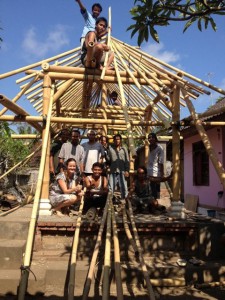 What year was your company Ibuku founded?

I founded Ibuku in 2010 as an international brand to spread the idea of designing outside of the box, designing for the future and using natural materials and sustainable systems that clients can feel good about. We aren’t perfect, but we push the limits to be conscientious about materials and collaborate and integrate new eco-innovations as they become available.

Why does bamboo make a suitable building material?

Bamboo is bountiful, beautiful and as strong as steel by weight. It’s lightweight and easy to handle, versatile as your imagination and the work is as high quality as your skill. It’s also flexible. Bamboo dances in earthquakes, while other rigid structures crack. Though a bamboo house is as flammable as a wooden house, it has fewer walls so it’s easy to escape!

Why is building with bamboo environmentally friendly?

If you had to invent the ultimate sustainable timber, you would make sure it could grow wild across a large part of the world without having to be watered or sprayed or cultivated by people; that each pole could grow strong as fast as possible during the rainy seasons; make it light enough for two men to carry; make sure that a clump would send up new shoots each year for decades so that you wouldn’t have to plant more and the person who’s land it was growing on wouldn’t cut it down because he could keep selling each year’s crop for a relatively steady income. Finally, make the timber grow in a culture where there were skilled craftsmen living light on the land and working with low impact tools.

Are there any downsides to working with bamboo?

Sometimes I dream of plywood and sheetrock!  It would be so much easier to make walls and floors with big flat surfaces, but I can’t get cosy with the thought of the rainforest being chopped down, sucked out and spread all over the surface of the world, so we take on the challenge to find a better way! 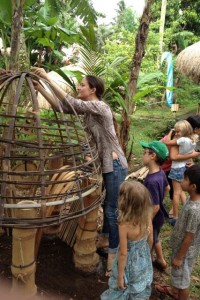 It seems that the Balinese no longer use bamboo extensively for building. What do they use it for?

As a matter of fact I counted about six new bamboo restaurants on Monkey Forest Road last week, so it looks to me like some people are taking bamboo construction up again! Now that we have a natural treatment to permanently protect it from bugs, bamboo makes a lot more sense for long-term structures. One of my workers just rebuilt his ‘bale daja’ in his family compound out of bamboo in a super cool vintage style. Balinese homes were traditionally built out of wood and bamboo, and the cremation towers and ogoh ogoh often still are.

Is it expensive to build a bamboo house?

The material costs less than a conventional structure, but the time required for their design and craftsmanship for a bamboo house is far more, so it balances out. The clients who have sought us out have wanted more and more innovative, luxurious structures. But it’s also becoming more affordable to build simple structures, so we hope to inspire people to use it in this way and change bamboo’s reputation while we are at it.

What bamboo project are you currently involved in?

Our team is gearing up to build new classrooms, desks, and tables for Green School. I just built a fairy-mushroom house with the Grade 2b class. We are also completing two private homes and beginning the concept design of a retreat centre. In Sayan, we are working on a new restaurant at Bambu Indah and a replica of a traditional Sumbanese House.

What are the most enjoyable aspects of your job?

I love seeing the bones of the house go up, and then the roof and walls start to fill in. That’s when I spend the most time on-site, planning the flow of the rooms, shapes of the doors, curves of the walls in a way that isn’t possible to completely figure out in advance. I love turning a structure into a comfy home, right down to the towels and kettles and flowers if the owners let me!

Where can I find more information about constructing with bamboo?

Come visit us! Email us in advance at [email protected] to arrange a tour of Green Village. In some of the houses, you can even spend the night! See our website www.greenvillagebali.com, or follow ‘Green Village Bali‘ on Facebook to see works in progress.