Brendan O’Donnell was born and grew up in Melbourne, Australia. As a young child, Brendan studied piano and was involved in various church and community choirs for many years. He attended Burwood Primary Teachers’ College and eventually became a school principal for 10 years. Brendan earned a Bachelor of Arts with a major in music at Monash University. While teaching in a Melbourne Secondary College, he was in charge of the music department, which gave him the opportunity to direct a number of successful musical productions. Brendan conducted two Melbourne-based “SING AUSTRALIA” choirs before moving to Bali. He has lived in Bali since 2008. In 2009, he started the Bali Community Choir, which currently has 60 members.

How did you end up on Bali?
I discovered Bali about 15 years ago and fell in love with the island and its warm and welcoming people. Ever since reading Treasure Island and Robinson Crusoe as a child, I dreamed of living on a tropical island, but never imagined that it would one day become a reality. I never married, so when my mother died nine years ago it gave me the opportunity to think about starting a new life, and Bali seemed to be the perfect location. Having visited Bali regularly, I started seriously looking for property. When I retired some years ago, I bought and renovated a little villa and was ready to move here permanently, and here I am! 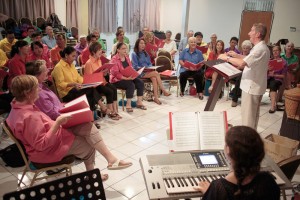 What gave you the idea of starting the Bali Community Choir?
For many years, I had conducted church choirs. I became involved with “SING AUSTRALIA,” established for the purpose of getting Australians to sing. This was the brainchild of Colin Slater, a well-known opera singer who first set up a choir in Canberra, which has since grown to almost 200 choirs all over Australia. His dream was to change society for the better through the joy of singing. For eight years I conducted the Hawthorn group, which started with 11 singers, and when I left, numbered over 150. I later began a Camberwell women’s choir, which also flourished and had over 60 members. So, I thought if I could do it in Melbourne, why not in Sanur?

Why were you drawn specifically to an ensemble of singers instead of to other forms of music?
A choir is a delight because it gives many people the chance to sing, even if they are not particularly good singers. Participating in a choir offers fun and satisfaction. It also gives me the opportunity of doing something that I love, meeting new and interesting people, enjoying a social activity that is exciting and lifts the spirit. If it does these things for me, then surely it should provide the same enjoyment for others. It’s also an opportunity to blend cultures, as everybody is welcome to join. My specific aim is to involve people and then build community spirit. With this aim in mind, we simply invite anybody who wants to sing to come along. There are no auditions; just walk in and join us. The result is a choir that may not be of professional standard, but that is not our aim. Enjoyment is the key.

What is the profile of the typical participant?
There is no “typical” participant! That is the beauty of a choir. It attracts all sorts of people from very different backgrounds, religions and occupations. It’s a melting pot! We have a fairly even balance between Indonesian and expat members. There’s also a nice balance between males and females. This is rather unusual, as most choirs, in my experience, are dominated by female members. I am finding this more even mix of voices to be very exciting. Among occupations, we have teachers, business people, dog trainers, masseurs, retirees, retail workers, jewellers, travel agents, and so on.

What’s the most difficult aspect of managing the choir?
We have had great difficulty in obtaining the services of an experienced keyboard accompanist. We have been fortunate to have some very talented pianists, but as so often happens in Bali, people pitch in but then have to move on for many different reasons. I am hoping that this interview may arouse the interest of an accomplished accompanist who is prepared to commit to regular attendance for very little remuneration but a lot of pleasure and genuine appreciation! 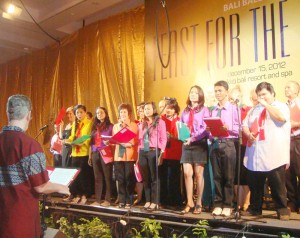 Has the choir ever performed at any public event?
Yes, over the years, we have been fortunate to perform a number of times in public; the Bali International Women’s Association annual dinner, twice at the Australian Consulate for memorial services, and particularly memorable was the Commemoration Service at GWK Park to remember those who had died in the Bali Bombings. This event was attended by past and present Australian Prime Ministers and the Governor of Bali along with Indonesian Ministers and Balinese notables. More private ceremonies include church services and funerals, and singing in private homes.

What plans do you have for the coming holiday season?
Each December we all pile into a bus and drive to several hotels and restaurants to sing Christmas carols for the assembled guests. This annual Christmas activity is great fun and always very well received, and the choir members have a wonderful evening together, whetting their appetites for future performances. This Christmas, the Bali Community Choir will be performing a carols programme at the GCC Christmas Concert on Friday, December 20th, at the Wicked Parrot Restaurant in Sanur on Sunday, December 22nd, at Biku Restaurant in Seminyak on Monday, December 23rd, and at the Sheraton Hotel Kuta on Thursday, December 26th.

How may readers join the choir?
Just come along to the Gateway Community Centre, Jl. Danau Batur in Sanur on a Tuesday evening from 7 to 9 pm. You won’t be asked to audition. You will be given a folder of music and invited to sing with the group. You will be made very welcome and you will be expected to have an enjoyable evening! Don’t be put off because you were told to shut up at school. This is your opportunity to do what you have always wanted, but have never been game to do; SING!

Caring for the Sentinels of The Deep